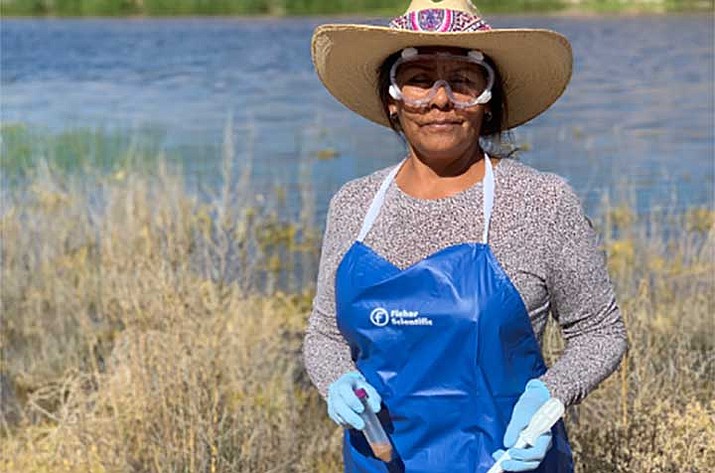 TSAILE, Ariz. — Diné College microbiology professor Dr. Shazia Hakim is looking into soils across the Navajo Reservation that could aid in fighting bacteria.

Hakim's findings were recently published in the International Journal of Innovative Science and Research Technology and the college’s School of Science, Technology, Engineering, and Mathematics (STEM) will conduct a baseline study to determine if soil from certain parts of the Navajo reservation hold antibiotic producer strains of bacteria or fungi, which can be a promising source for the future.

Hakim said the soil samples used in this study were collected from various locations on the reservation including Tuba City, Moenave, Rare Metals, and Moencopi Wash from March to July 2019.

“Geographic location, weather, and especially temperature and scarcity of water and other nutrition in the soil plays an important role in survival capabilities of environmental microorganisms,” Hakim said. “We are hoping to find some good antibiotic producer strains of bacteria from the soil of deserted dry lands.”

According to the World Health Organization (WHO), the emergence of drug resistant bacteria has developed into one of the biggest global threats. If no significant action is taken by the year 2050, superbugs will kill more people than cancer and diabetes combined.

“Bacteria has the ability to constantly mutate and change their defense mechanism that can make the antibiotics ineffective,” Hakim said. “Additionally, incorrectly prescribed antibiotics, inappropriate and overuse and prescription of antibiotics without having correct culture and sensitivity results is contributing towards development of superbugs that are resistant to almost all available antibiotics.”

“We were able to collect soil samples from various locations followed by isolation, and identification of soil-inhabitant bacteria by using a patch plate method,” Hakim said. “Out of thousands of colonies isolated, only 104 colonies were selected for further testing to look for antagonistic activity against test strain of ESBL negative Klebsiella pneumoniae. Nine out of 104 selected colonies were gram-positive bacterial strains that showed the antibacterial activity against the test strain of Klebsiella pneumoniae, a bacterium.”

This is an ongoing study with lot of potential, Hakim said.

“We are collecting more samples and screening them and willing to test against ESKAPE safe relative bacteria. Final identification and characterization of these producer strains will be based on 16S ribosomal RNA,” she added.

Each school year, the School of STEM graduates about 43 percent of overall graduates. Current Census data shows that the primary focus of jobs on the Navajo Nation are in the field of STEM. Additionally, a recent study has shown more than 80 percent of Diné College graduates remain within their community.

“With the anticipation of this trend continuing, Diné College is working to ensure our students are able to meet the workforce needs of the Navajo Nation by offering students scholarly research and opportunities,” said James Tutt, dean of STEM. “Two weeks ago, we also broke ground for a $7.4 million STEM building at Diné College’s Shiprock location, so we can boost our STEM programs.”