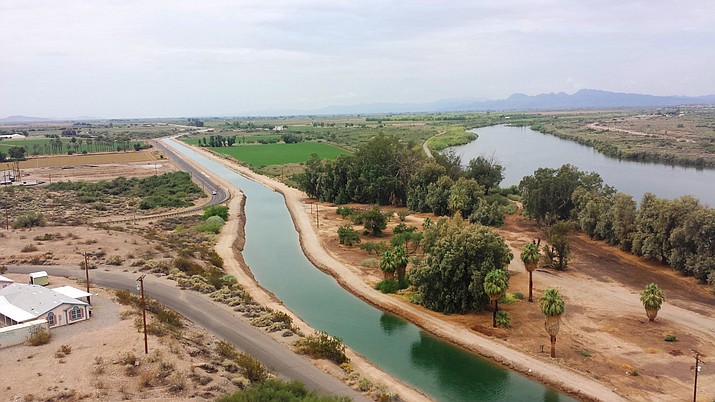 A canal system on the Colorado River Indian Tribes reservation is seen near Parker, Arizona. The tribe has played an outsized role in Arizona to help keep Lake Mead from falling to drastically low levels. Still, Arizona is expected to face the first-ever mandatory cuts to its Colorado River water supply in 2022. (Angie Ingram/CRIT Water Resources via AP)

FLAGSTAFF, Ariz. — For thousands of years, an Arizona tribe relied on the Colorado River's natural flooding patterns to farm. Later, it hand-dug ditches and canals to route water to fields.

Some of those fields haven't been producing lately as the tribe contributes water to prop up Lake Mead to help weather a historic drought in the American West. The reservoir serves as a barometer for how much water Arizona and other states will get under plans to protect the river serving 40 million people.

The Colorado River Indian Tribes and another tribe in Arizona played an outsized role in the drought contingency plans that had the state voluntarily give up water. As Arizona faces mandatory cuts next year in its Colorado River supply, the tribes see themselves as major players in the future of water.

"We were always told more or less what to do, and so now it's taking shape where tribes have been involved and invited to the table to do negotiations, to have input into the issues about the river," first-term Colorado River Indian Tribes Chairwoman Amelia Flores said.

Lake Mead on the Nevada-Arizona border has fallen to its lowest point since it was filled in the 1930s. Water experts say the situation would be worse had the tribe not agreed to store 150,000 acre-feet in the lake over three years. A single acre-foot is enough to serve one to two households per year. The Gila River Indian Community also contributed water.

The Colorado River Indian Tribes received $38 million in return, including $30 million from the state. Environmentalists, foundations and corporations fulfilled a pledge last month to chip in the rest.

Kevin Moran of the Environmental Defense Fund said the agreement signaled a new approach to combating drought, climate change and the demand from the river.

"The way we look at it, the Colorado River basin is ground zero for water-related impacts of climate change," he said. "And we have to plan for the river and the watersheds that climate scientists tell us we're probably going to have, not the one we might wish for."

Tribal officials say the $38 million is more than what they would have made leasing the land. The Colorado River Indian Tribes stopped farming more than 15 square miles to make water available, tribal attorney Margaret Vick said.

"There's an economic tradeoff as well as a conservation tradeoff," she said.

While some fields are dry on the reservation, the tribe plans to use the money to invest in its water infrastructure. It has the oldest irrigation system built by the U.S. Bureau of Indian Affairs, dating to 1867, serving nearly 125 square miles of tribal land.

The age of the irrigation system means it's in constant need of improvements. Flores, the tribal chairwoman, said some parts of the 232-mile concrete and earthen canal are lined and others aren't, so water is lost through seepage or cracks.

A 2016 study conducted by the tribe put the price tag to fix deficiencies at more than $75 million. It's leveraging grants, funding from previous conservation efforts and other money to put a dent in the repairs, Flores said.

"If we had all the dollars in the world to line all the canals that run through our reservation, that would be a great project to complete," Flores said. "I don't think that's going to happen in our lifetime."

The tribe is made up of four distinct groups of Native Americans — Chemehuevi, Mohave, Hopi and Navajo. The reservation includes more than 110 miles of Colorado River shoreline with some of the oldest and most secure rights to the river in both Arizona and California.

While much of the water goes to farming, it also sustains wildlife preserves and the tribe's culture.

"We can't forget about the spiritual, the cultural aspect to the tribes on the Colorado River," Flores said. "Our songs, clan songs, river and other traditional rites that happen at the river."

The tribe can't take full advantage of its right to divert 662,000 acre-feet per year from the Colorado River on the Arizona side because it lacks the infrastructure. It also has water rights in California.

An additional 46 square miles of land could be developed for agriculture if the tribe had the infrastructure, according to a 2018 study on water use and development among tribes in the Colorado River basin.

"One day," Flores said. "That's the goal of our leaders who have come behind me, to use all of our water allocation and develop our lands that right now are not developed."