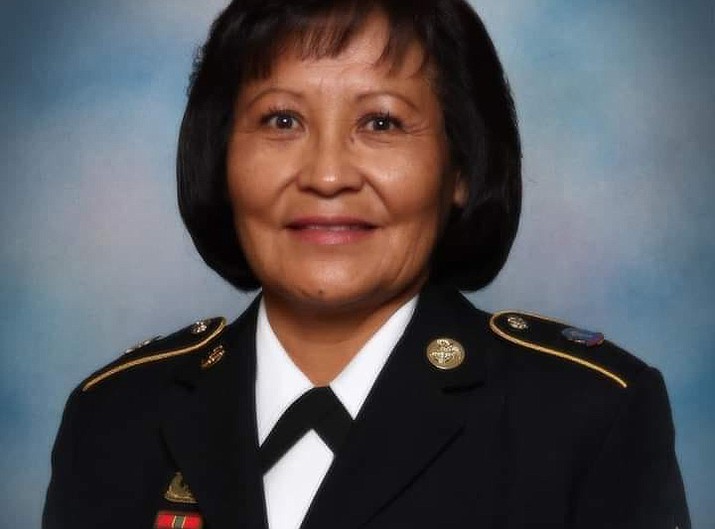 Cecelia Barber Finona went missing in May 2019. Her remains were found in February of 2021 and she was identified June 30. (Photos courtesy of Missing and Murdered Indigenous Women USA)

FARMINGTON, N.M. — The body of a Navajo woman missing for two years has been found in Nevada, and her boyfriend is facing murder charges.

Authorities in Farmington, New Mexico, say the body was found in Clark County, Nevada, in February. DNA test results last week showed the remains belonged to Cecelia Finona, who was 59 when she was last seen at her Farmington home the evening of May 30, 2019.

Police filed charges of murder, kidnapping and and tampering with evidence against her boyfriend, Jerry Jay July 2. It was not clear if he had an attorney who could comment on his behalf.

In court documents from 2019, Finona’s mother recalled that Finona and Jay had been arguing the night she disappeared and then someone left the house in the middle of the night.

According to a court document, Jay used Finona’s ATM card several times, with the first withdrawal made around 6 a.m. May 31 in Farmington and the next around 9:30 a.m. the same day in Window Rock, Arizona. Window Rock is the capital of the Navajo Nation.

He also used her debit card the following two days in Las Vegas and Kingman, Arizona, according to police. The total withdrawn amounted to more than $1,200.

Police said surveillance footage did not show Finona with him.

A missing persons report was filed for Finona on June 1, 2019, when her mother told others she hadn’t been home in two days. Her family has since logged searches in Farmington and the nearby Navajo Nation, her daughter Julietta Finona said shortly after the disappearance.

The daughter said the family found blood at Finona’s home and reported it to police. She also said her aunt’s dog led them to her mother’s eyeglass lens on the property.

Police note in court documents that the blood at the home stretched from the bottom of the porch to Finona’s gravel driveway and that someone had tried to cover it with potting soil. A “single eyeglass lens covered in blood” also was found, the officer said.

Julietta Finona said in 2019 that she and her mother were close and the last time they spoke was the morning before she disappeared. Cecelia Finona had been excited about her nephew’s recent graduation, her daughter said.

Finona had returned to New Mexico after 31 years in the U.S. Army. Months before her disappearance, she was featured in the Farmington Daily Times in a story about women in the military being honored in Shiprock.

“She was very active and involved in the community,” Julietta Finona said.