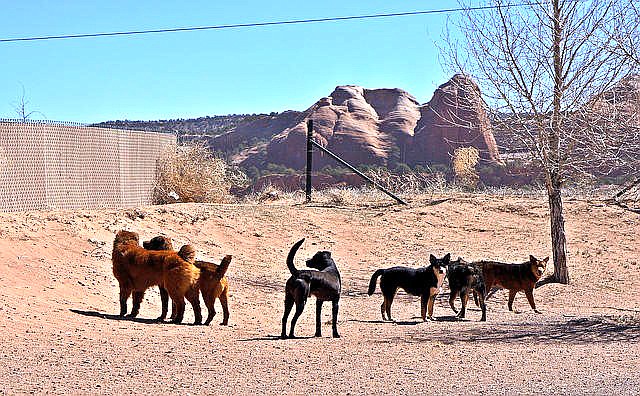 TUBA CITY, Ariz. — In October 2019, a member of the Tuba City High School cross country team, was out for a run with his team during an afternoon practice, when he was attacked by a pack of dogs.

The attack was sudden and without provocation. With no help in sight, 15-year-old Ayden Beam, had no choice but to try to outrun the four dogs, as they barked, growled and nipped at his legs.

One dog was able to sink its teeth deep into Ayden’s inner-thigh, causing blood to instantly flow down his leg. But now, full of adrenaline, Ayden kept running as he knew that was his only chance of escaping the attack.

Ayden was able to make it back to the high school where he was treated and taken to the hospital. He received 13 stitches to close the gash on his inner thigh, and two additional stitches to close another cut on his outer thigh.

Ayden’s mother, Erica, said she reported the incident to the school along with local police department and animal control, but no action was taken.

The incident occurred just one week after a runner was bitten during the annual Bud David Invitations, a High School Track meet hosted by TCHS.

Around one year later, in 2020, another of Beam’s sons was bitten by a dog as he was entering the Tuba City Elementary School on his way to work.

“Luckily his (injury) weren’t nearly as bad as his brother’s but still (he) had to go to the emergency room during the height of COVID,” Beam said.

Dog attacks and bites are nothing new in Tuba City or on the Navajo Nation.

According to Navajo Nation Animal Control, there are over 3,000 individuals treated each year at hospitals and clinics for animal attacks and bites.

“The majority of victims are children and elderly,” the agency stated.

Records from the Navajo Nation Office of Environmental Health show an average of 247 dog bites a year in Tuba City alone over the course of the last five years.

On a Nation with a geographical area the size of the state of West Virginia and a population of roughly 173,000 citizens, there are currently only five animal control officers and none are stationed in the Tuba City area.

Locally, Tuba City runners know all too well the dangers of hitting the pavement and roads to log in a few miles.

Just last year, Brittney Laughter, who works with the Tuba City Unified School District, had just finished her evening run and was walking along the street when a dog from across the street ran after her and sank its teeth into her calf. Laughter was able to get away from the dog, but from that day on she’s been scared of loose, unleased and even leashed dogs.

“I do my best to avoid them,” Laughter said. “Whether that might be taking a whole different route.”

But the danger of dog bites is not just a runner’s problem.

“When the aggressive dog(s) start attacking, a few men driving south bound on Peshlakai stopped and assisted (my daughter) in breaking up the dog fight,” Renelda said. “The men were able to chase away the other dogs.”

Both Renelda’s daughter and one of the men who stopped to help were injured and treated at the hospital after the attack.

According to an article in the Navajo Times on May 16, Lyssa Rose Upshaw, 13, asked her mother, Marissa Jones, if she could go for a jog on a local trail near their home as her mother was preparing dinner. As the evening grew later, Jones began to worry as Lyssa hadn’t returned home yet.

Eventually Jones and other family members began searching the area. After searching the trail and with the help of Lyssa’s sister and cousin, Marissa’s worst nightmare came to pass. Lyssa’s body was found curled up in a fetal position, and pieces of flesh was scattered around.

“Her legs were all chewed up,” Jones recalled. “She was gone.”

The article notes that there were numerus aggressive dogs around the area that were barking and snapping at the family as they made their way toward Lyssa’s body.

Animal control officers were able to round up a total of 12 dogs involved in the attack, but Jones reported that the family had about 20 “mean dogs.” While this case is currently under investigation, there is no doubt in Jones’s mind that her daughter was killed by the pack of dogs.

The Navajo Times went on to report that “if Lyssa’s death is confirmed to be a result of predation, she will be the fifth person killed by dogs on the Navajo Nation since 2010.”

While laws are being drafted to stiffen the penalties for owners unable to keep their dogs under control, two huge problems remain; the lack of Navajo Nation Animal Control Officers, and the fact that there are 250,000 dogs currently on the streets on the Navajo Nation, many of which are roaming freely.

While the Navajo Nation Council has vowed to make hiring more animal control officers a priority, along with increasing their budget, which would provide these officers with the resources and tools they need to adequately perform their job, a much bigger problem persists, and if not addressed, will only prolong the dire situation… owner responsibility.

Owners are not taking responsibility of their animals.

Navajo Nation Animal Control laws requires that owners can have a maximum of four dogs and four cats per house hold, and all dogs and cats must be licensed every year.

A dog or cat license requires that all immunizations, including rabies must be up-to-date, and both the license and rabies tag must be worn on the harness or collar of the pet at all times. Not abiding by these laws can subject the owner to a monetary fine.

Spaying or neutering your pet is extremely important toward controlling the pet population and ensuring the overall health of our dogs, cats, and community.

Moonwater emphasizes the importance of getting your dogs spayed and neutered and noted that there are numerous options, including cost saving options toward getting your pet fixed.

“(I) know dogs are our protectors of ourselves, family and homes, but for them to attack, chase, interrogate outside their boundaries is unacceptable,” Laughter said. “As owners, it should be your responsibility to make sure the things like dog bites or chasing of people off your property doesn’t happen.”

Beam, whose two sons were bitten by dogs, said it is not the animals fault.

“I don’t blame the dogs but rather the humans that don’t take responsibility for their pet by neutering/spaying and keeping the dog on a leash, especially since they are territorial animals and only protecting them,” she said. “The Navajo Nation only has one animal control agency with a handful of agents and they are based out of Window Rock. Protect your community by controlling the dog population.”

Recently, Navajo Nation First Lady Phefelia Nez and Second Lady Dottie Lizer led a campaign to raise awareness about the importance of spaying and neutering pets to help control the animal population and reduce the number of unwanted animals on the Navajo Nation.

While dog attacks and bites have become a serious problem, the Navajo Nation is reacting and putting laws and resources in place to help the Nation, but ultimately this is a community problem. We must all do our part to help stop the overpopulation of dogs and cats in our own neighborhoods. Spay or neuter your pets, keep your dog on a leash or within a fenced area, and report any unwanted pets to the Tuba City Humane Society.