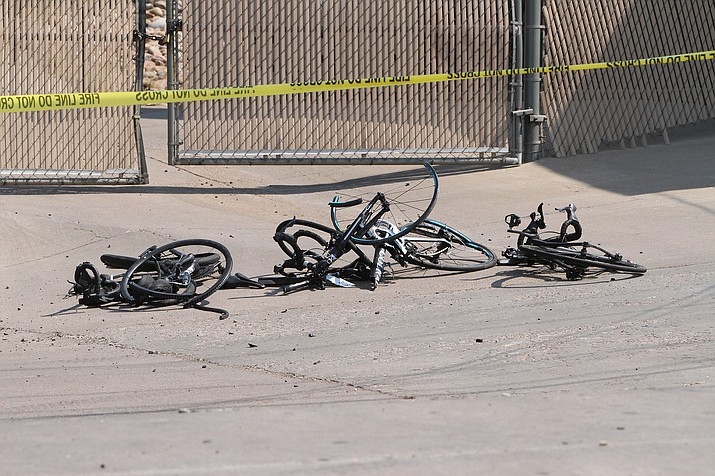 This Saturday, June 19, 2021, photo courtesy of The White Mountain Independent shows the scene of an accident with broken bicycles in Show Low, Ariz. A driver in a pickup truck plowed into bicyclists competing in a community road race in Arizona on Saturday, critically injuring several riders before police chased down the driver and shot him outside a nearby hardware store, police said. (Jim Headley/The White Mountain Independent via AP)

PHOENIX (AP) — A cyclist who was injured in a Show Low bike race has died.

The cyclist was struck by an Arizona driver who plowed his pickup truck into a group of people participating in the bike race, authorities said.

A 58-year-old man died of his injuries July 10, Arizona Department of Public Safety spokesman Bart Graves said. No other information about the victim was immediately released.

The accused driver, Shawn Michael Chock, 36, was indicted last week on nine counts of aggravated assault with a deadly weapon and one count each of fleeing an accident and unlawful flight.

Seven bicyclists were injured June 19 when Chock sped into a crowd gathered for the annual 58-mile (93-kilometer) Bike the Buff race in Show Low, a mountain city about three hours northeast of Phoenix, authorities said. Witnesses described seeing the bodies of cyclists flying left and right.

The driver then hit a telephone pole, and backed out of the crowd as cyclists pounded on the truck's windows, screaming for him to get out, witnesses said. He then drove down the road, turned around and headed back toward the cyclists before driving away, witnesses said.

Police caught up with Chock outside a nearby hardware store and shot him. Chock was hospitalized in Flagstaff until his release July 2. He remains jailed in Navajo County.

Hunter T. Lewis, an attorney representing Chock, did not immediately respond Monday to messages by The Associated Press seeking comment.

Navajo County Attorney Brad Carlyon said he is expecting more charges to be filed in the wake of the man's death.

"Once we have received all the law enforcement reports we will receive to determine if any new charges are appropriate to bring," Carlyon said.

The Arizona Department of Public Safety is overseeing the investigation.