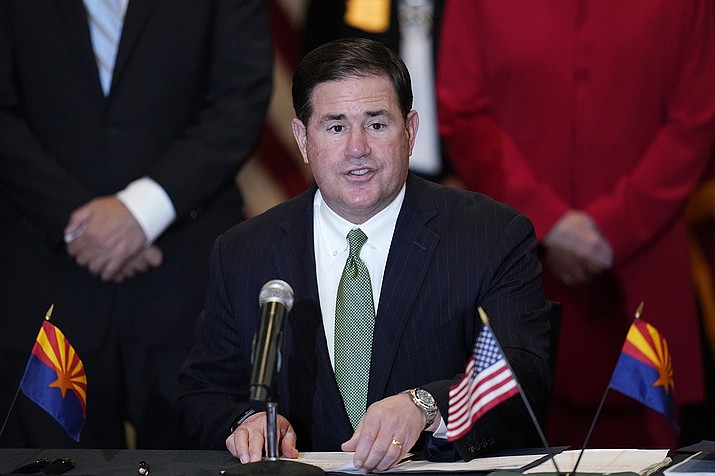 The new small business tax is expected to cut $292 million from the original $836 million schools would have received under Proposition 208, according to the Legislature's budget analysts. Backers of the initiative have vowed to block the new law by referring it to the ballot.

The action came as the Republican governor faces a Monday deadline to sign or veto 35 remaining bills. He also signed a measure that tightens the state's sex education law and requires parents to give permission for instruction that includes sexual issues in non-sex ed classes.

Ducey vetoed an earlier version of the sex education bill, citing concerns that it was overly broad and vague and that its ban on classes before fifth grade could put children at risk by limiting sexual abuse prevention education

The new version specifically allows such "good-touch, bad-touch" teaching and stripped out a double opt-in for discussion touching on sexual orientation or gender issues. But it still requires notice and parental pre-approval for any discussion of sex-related material outside of sex ed classes.

The broad requirement would block discussions of historic events that have a sexual component, like the 1969 Stonewall riots in New York, considered the genesis of the modern gay rights movement, or even the U.S. Supreme Court ruling legalizing gay marriage, without parental pre-approval.

"Parents should have the right to know what their children are learning in school," Ducey said in a statement. "This is a no-brainer piece of legislation that protects our children from learning materials that aren't suited for them. Every family has their own priorities for their children's education, and parents should get to weigh in."

Republican backers of the bill say it is needed to boost parental rights, while detractors say those rights are already in Arizona law and say the bill is an assault on LGBTQ students.

"I am not going to waste public dollars on lessons that imply the superiority of any race and hinder free speech," Ducey said in a statement.

Ducey's signature on the Proposition 208 workaround bill by Chandler GOP Sen. J.D. Mesnard means small businesses are no longer subject to the 3.5% surcharge on income above $250,000 for individuals or $500,000 for couples in the initiative.

"This tax cut will keep Arizona competitive for small businesses already operating here and new businesses flocking here every day," Ducey said in a statement. "After a year as tough as the last, we should not be raising taxes on our small businesses — we should be cutting their taxes."

Ducey did not mention that the new tax category cuts a large part of the money voters wanted schools to get by imposing Proposition 208, called the Invest in Education Act. It was an outgrowth of a 2018 statewide teachers strike that won 20% pay raises but still left teachers among the lowest paid in the nation.

Backers of the measure say the governor and the Republican-controlled Legislature are thumbing their nose at voters who wanted the wealthy to pay more to fund education.

"What people need to understand is that's $150 million that was meant for teacher salaries, that's what the governor just erased," said Joe Thomas, president of the state teachers union, the Arizona Education Association.

Half of the new tax on the wealthy will be used for raises for credentialed teachers, 25% to boosting wages for cafeteria workers, bus drivers and other support staff, and the rest for teacher training, vocational education and other initiatives.

Small business income is now taxed at the individual level and is subject to the surcharge. Mesnard said proponents of the tax said it would not affect small businesses and that some voters who backed the measure did not like how it might affect businesses but wanted the new revenue to fund education.

He also said in an interview that he's not worried about the voter referral.

"I'm not concerned about it because I think it'll be a landslide election," Mesnard said earlier this week. "And then it will be voter protected, which I don't typically think is good public policy as a matter of rule, but if it's voter protecting helping small businesses I could probably make an exception."

The Arizona Constitution allows voters to block any law passed by the Legislature from taking effect by collecting signatures from 5% of the people who voted in the last general election, which this year would be nearly 120,000. Voters then have the final say in the next general election and can either approve or repeal the bill.

A massive tax cut included in the already-signed budget package reduces income taxes by about $1.9 billion and shields the wealthy from the new surcharge by keeping their top rate at the current 4.5%. The general fund would use hundreds of millions of dollars a year to directly fund the new education spending in Proposition 208, siphoning off money that could be spent on other priorities.

Backers of Proposition 208 are collecting signatures to refer the tax cuts to the ballot and plan to do the same with Mesnard's bill now that it had been signed into law.

Thomas said he believes Ducey and the Republican-controlled Legislature will face a backlash from the tax cuts and other steps they've taken this year in response to Democratic wins in the November election. The Legislature stripped power from the elected Democratic secretary of state and education chief and is auditing the results of the election.

"It's unbelievable how they're trying to overturn the will of the voters in every instance they can," Thomas said. "And I believe there's going to be a reckoning."