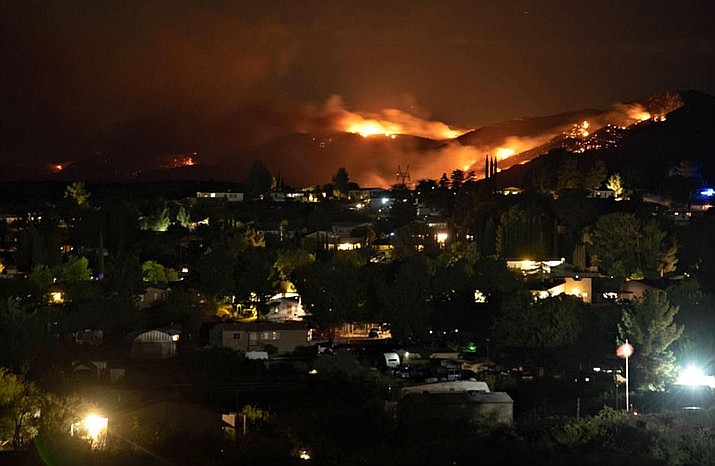 The Tiger Fire the night of Tuesday, July 6, 2021, view from the Incident Command post. (Inciweb)

The fire - burning 11 miles east of Crown King, reaching 13,175 acres - crossed a management action point Wednesday afternoon, which prompted the Incident Management Team to recommend to the Yavapai County Sheriff’s Office that Crown King be alerted that their evacuation status has changed from “Ready” to “Set.”

The fire, which started June 30, has 361 fire personnel working it.

There will be a community meeting on Facebook Live with the IC and Operations July 8, at 8 p.m.; Prescott National Forest Facebook Page.

At the request of the incident management team, the Yavapai County Sheriff’s Office has closed the Crown King Road (County Road 59) between Crown King and Cleator effective at 8 a.m. July 7, except for assigned fire related personnel and residents with identification.

The Crown King Road was closed for the safety of firefighters using heavy equipment working in the closure area along County Road 59. The Bumblebee Road remains closed from Black Canyon City to the junction of county roads 179 and 178.

With the community of Crown King in a “Set” status, the town is now closed to the public. Residents will be allowed only in and out.

The Tiger Fire was very active Wednesday. On the north and western perimeter of the fire, the continued high temperatures and low humidity combined with burnout operations north and south along the 52 road in the vicinity of the wilderness boundary, produced a large amount of smoke during the afternoon.

Other smoke columns within the fire perimeter were more visible as unburned pockets of fuel on the interior of the fire were consumed.

Crews continued to prepare the Crown King Road (County Road 59) for a possible contingency firing operation between Cleator and Crown King, should conditions require that tactic in coming days. Other crews worked patrolling, extinguishing hotspots, and securing the eastern perimeter of the fire.

Forecasts call for slightly less hot and dry weather with a slight chance of thunderstorms Thursday along with the accompanying threat of gusty outflow winds.

Presently the communities of Cleator and portions of Black Canyon City are in “READY” status. Crown King and the Lorena Gulch Cabins are in “SET” status, and Horsethief Basin is in “GO” status in accordance with Arizona’s Ready-Set-Go Program, https://ein.az.gov/ready-set-go.

Information provided by the Incident Command on the fire and the Prescott National Forest.