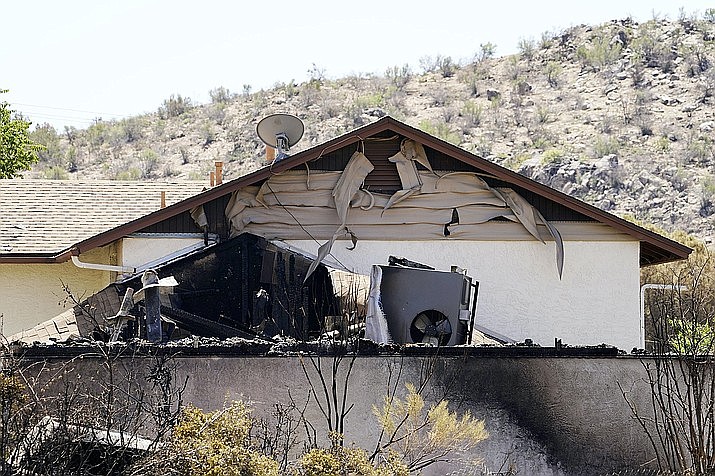 This photo shows the remains of a damaged home from the Spur Fire Friday, May 28, 2021. The fire burned dozens of acres and destroyed several homes and other structures in Bagdad, Arizona. (Rob Schumacher/The Arizona Republic via AP, Pool)

BAGDAD, Ariz. - From the moment an accidentally-ignited wilderness fire in late May roared through Bagdad, destroying and damaging 24 homes, requiring evacuation of all 1,500 residents, the Yavapai County community rallied to support those families.

A United Way of Yavapai County appeal generated some $164,000 worth of donations, some $15,000 of emergency dollars distributed almost immediately through the local American Red Cross chapter and other local agencies.

Such generosity to the victims of the Spur Fire proved an inspiration to agency leaders soliciting dollars to offer needed help, Demers said.

Yet just before the Fourth of July holiday the United Way’s donation stream came under unexpected scrutiny over social media given the Freeport-McMoRan mine company’s intention to provide new homes and assistance to all of the victims.

Some posters misconstrued the United Way’s role in distributing funds to these victims.

At all times throughout this emergency, Demers has assured that her fund-collection agency has abided by its strict financial accounting to ensure every dollar collected is dispersed as donors intended. Accusations of anything to the contrary are erroneous, she said.

On Friday, July 2, the United Way’s 10-member task force of community leaders, including representatives from the mining company, were informed that because the company’s insurance provider will cover all the employee’ losses, that their relief is no longer required.

Not only that, Demers said, the task force was informed through the company’s representatives that Internal Revenue Service (IRS) rules do not allow charitable dollars to be tapped for similar expenses.

“While our intent was to distribute all of the funds, we are comforted by the fact that Freeport-McMoRan is fully meeting the needs of its employees and their families who were impacted by the fire. This is a true testament to the company’s strong commitment to its employees and the community,” Demers said in a written statement on Friday.

On Tuesday, July 6, after conferring with task force leaders, Demers said she is mailing a letter to all donors to clarify the situation. All will be allowed to collect a refund if that is their choice, she said.

The United Way follows a donor wish policy for all its financial gifts to area charities.

Throughout this effort, Demers said she continues to be inspired by how so many across the county reached out to help a fellow community in crisis.

“It’s heartwarming to know what a great community we live in where we can rally around another for those needs,” Demers said. “No one knows in such devastation what the recovery process might look like, or what the timeline for recovery might be.

“What we do know is we have an incredible community and, together, we can rally and respond.”

As for Freeport-McMoRan, Demers said she can only applaud their commitment to stepping up for their “town.”

“They have gone above and beyond,” Demers said of the company.

Messages left Tuesday for company officials were not immediately returned.

The United Way task force will continue to evaluate any unmet needs for these victims for which this fund can be utilized, and will provide a public detailing of how funds are dispersed, Demers confirmed.

She said she is eager to answer any concerns or questions anyone might have about this fund, or the agency’s standing fund distribution policies.

Anyone wishing their donations — check or online credit card payment — be returned will get their money back within a week, if not sooner, she said.

“And we’re here to answer all questions,” Demers said.