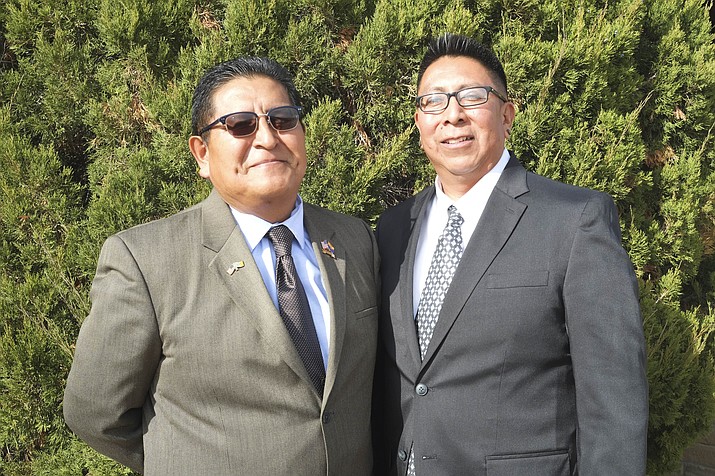 Clark Tenakhongva (left) and Tim Nuvangyaoma were sworn in as the new vice chairman and chairman of the Hopi Tribe Dec. 1 at the Hopi Tribal Offices in Kykotsmovi, Arizona. Loretta Yerian/NHO

The candidates for vice chairman are incumbent Clark Tenakhongva from Hotevilla and challenger Craig Andrews from Mishongnovi.

The primary election will be September 9, but since there are only two candidates for vice chair those candidates will go directly to the general election.

The deadline for requesting an absentee ballot is July 29.

Like other tribes, Hopi struggled through the coronavirus pandemic, enacting tough restrictions to keep COVID-19 from spreading further. Around 1,300 Hopis have been infected with the virus since the pandemic began.

During a public forum last month, the candidates for chairman and vice chairman recognized the toll the virus has taken on the reservation where wearing masks is still required and the tribe is slowly reopening.

"It's not part of Hopi, it's not part of our culture out here, but yet we have to follow that to save each one of us," Tenakhongva said. "We've lost a lot of people."

Thousands of Hopis are eligible to vote in this year's elections but aren't required to register. Turnout for the 2017 election was low, with about 1,620 votes cast.

The Hopi chairman and vice chairman run separately. Much of their authority comes from the Tribal Council, which functions like a city government. The chairman presides over meetings but doesn't vote except to break a tie.