U.S. land agency plans to round up burros near Lake Mead 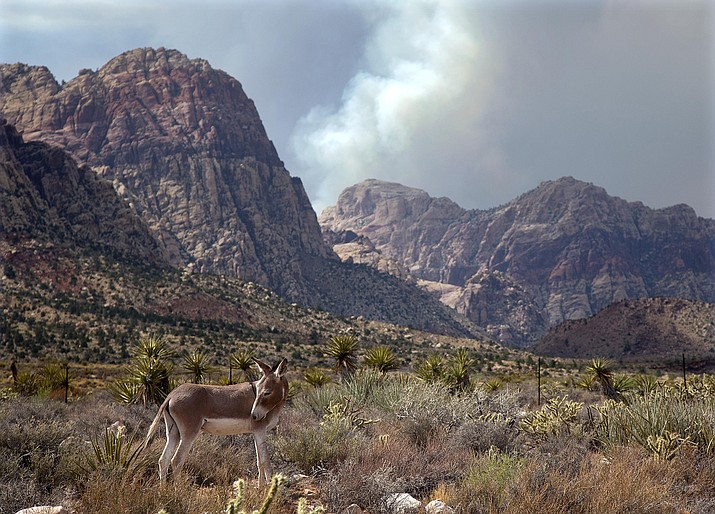 The U.S. Bureau of Land Management is proposing rounding up more than 500 wild burros in the desert north of Lake Mead. The feral donkeys are stripping the land of vegetation and could die off if the population isn't managed along the Arizona-Nevada line, the agency said. (AP Photo/Julie Jacobson, File)

LAS VEGAS (AP) — The U.S. Bureau of Land Management is proposing rounding up more than 500 wild burros in the desert north of Lake Mead.

The feral donkeys are stripping the land of vegetation and could die off if the population isn't managed along the Arizona-Nevada line, the agency said. It wants to gather most of them to offer up for adoption.

If approved, the government also plans to temporarily sterilize other burros and round up the animals at other points over the next decade, the Las Vegas Sun reported.

No date for the roundup has been set. It could be years away or as early as this fall if a historic drought in the U.S. West dries up enough plants and grass to force starvation conditions, agency documents indicate.

The proposal also includes removing a small herd of wild horses in the same area.

The Bureau of Land Management estimates at least 554 burros and 36 horses live in the Lake Mead Complex, an expanse of rangeland covering about 291 square miles (753 square kilometers). It's one of the biggest herds in Nevada.

The agency manages the complex along with the National Park Service. The area can support up to 98 burros and no horses, Bureau of Land Management officials said.

The animals reproduce exponentially and have few predators, and their demands mean food and water sources aren't sustainable, the agency said in a draft environmental assessment in April.

"That's what we see across the state, is that water is our limiting factor," said Tabitha Romero, a wild horse and burro specialist at the Bureau of Land Management's Las Vegas office.

The initial roundup would reduce the population to 22 burros in the Gold Butte area, where the animals congregate.

The agency managed about 4,500 burros scattered over about two dozen herd areas in Nevada as of March 2020. Only about 800 can live sustainably in the state, officials said.

Animals last were gathered at the Lake Mead Complex in 2007, when 149 burros were removed and the population was largely cleared out near Searchlight. Across the river, near Bullhead City, Arizona, the agency is removing up to 500 burros, its fifth roundup in northwestern Arizona since 2017, the Sun reported.

If the Lake Mead roundup is approved, the bureau would use traps baited with food or water and helicopters to drive the animals into pens. Some female animals would be given a contraceptive shot before being set free.

Animal advocates want protections for wild burros and mustangs to live on the land.

Donkeys were a key part of Nevada's mining heritage, hauling supplies at camps, ferrying ore through mine shafts and breeding with horses to produce the mules that pulled wagons. They escaped their keepers or were released when no longer needed.