Column: Riding for those who can't, because freedom is not free 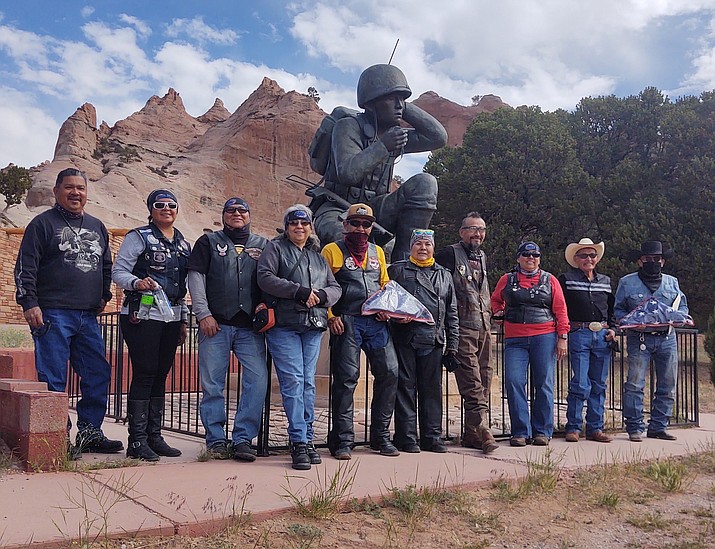 FLAGSTAFF, Ariz. — After a 12-day motorcycle ride across the United States, traveling 15 different states with a total of 5,193 miles, I reflect on my commitment to honor our veterans.

We began our journey May 23 from my home in Flagstaff, Arizona. I asked a fellow lady rider, Karen Barney, to join me in this mission to escort two flags across the United States — the Code Talker flag and the Freedom flag, both a part of the Flags of Honor Escorts developed by David McElroy, a U.S. Air Force veteran from Mississippi.

The Code Talker flag, which I have been the guardian of since August 2020, has brought awareness to the 25 Native American tribes who utilized their language while in military service in both WWI and WWII.

The Navajo Code Talkers, are credited for the World War II victory in 1945, during the Pacific theater.

On July 26, 2001, the Navajo Code Talkers were awarded with Congressional gold and silver medals.

On May 23, 2001, the Hopi "Wildcat Division" 81st Infantry and the 380th Bombardment group of Hopi Code Talkers were recognized by the state and local dignitaries as the families of the 10 Hopi Code Talkers gathered at Hopi Veterans Memorial Center in Kykotsmovi for a public ceremony.

The freedom flag was transferred to me on May 20 in Williams, Arizona, by guardian Leif Meisinger, a member of California CVMA 33-3, who was unable to make the journey across the country due to medical reasons. 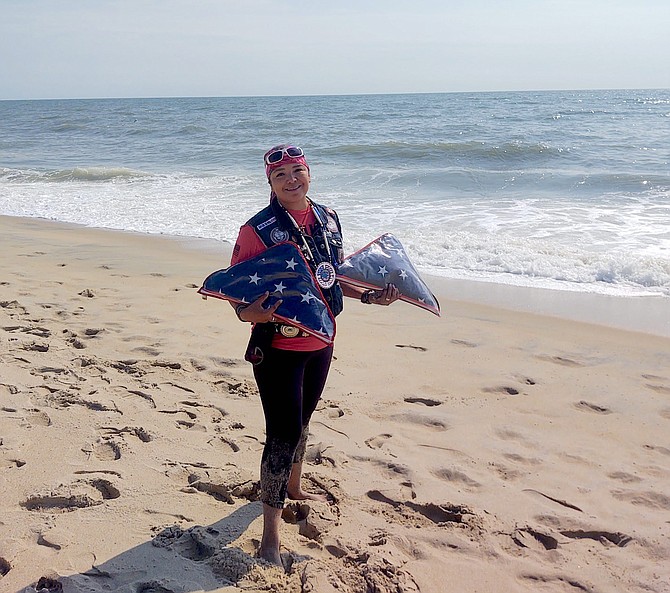 Riders carry to flags during their Journey to the Atlantic Ocean ride. They also collected ocean water to bring back to the Navajo Nation. (Photo/Karen Barney)

Meisinger is a combat veteran and struggles with PTSD, wounds unseen. He told me that I was the only person he trusted with the Freedom Flag, so he asked me to escort the flag to Washington DC, to honor all veterans who fought for our freedom.

As Karen and I began our journey, we first made an initial stop at the Navajo Code Talker statue located in front of the Gallup Cultural Center, Gallup, New Mexico. We felt it was important to begin by remembering the brave 300 Navajo Marines who were trained to use our sacred language to help win the war.

Day two, we stopped to visit the Choctaw Veterans Memorial near Oklahoma City. The Choctaw also used their language in both WWI and WWII.

Colonel Alfred Wainwright Bloor first noticed two Choctaw Indians speaking their language while in the 142nd Infantry, he couldn’t understand them, so he knew the Germans would not understand them too. The U.S. Army began to use them for code talking in WWI.

On May 29, we were fortunate to have an unplanned meeting with three-star U.S. Army Lieutenant General Michael Ferriter and U.S. Army Command Sergeant Major Earl Rice at the National Veterans Memorial Museum.

After introducing ourselves as Navajo Hopi Honor Riders from Arizona and sharing with them about how the non-profit organization began with US Army SPC Lori Piestewa KIA on March 23, 2003, they were both very familiar with the attack on the 507th Maintenance Company at Nasiriyah during Operation Iraqi Freedom.

All across this great country we received warm welcomes and great hospitality from patriotic Americans. Some waited at gas stations, American Legions, VFWs, elementary schools, hotel lobbies and the memorials that we visited. Many provided sack lunches, water, Gatorade, pepperoni bread, baked goods, hand-sanitizing gel, hot meals and gas for our motorcycles.

An additional part of our journey as Navajo women was to collect Atlantic Ocean water, which we did on May 28 at Rehoboth Beach in Delaware. On April 11, my sister, Tarah Weeks, and I collected Pacific Ocean water from the Coronado Beach in San Diego, California.

In the Navajo and Hopi culture; “Tó éí iiná” (Water is Life), it is essential to all life on Mother Earth, nahosdzáán. As a young girl, I noticed that my great grandmother used to make it a point to bring home Pacific Ocean water to Diné Bikéyah, to ask for rain, moisture for our dry land.

On day 12, as we returned home to Diné Bikéyah, Navajo country. We poured the last of the Atlantic and Pacific Ocean water, in hopes that moisture, rain would come to our people here in the Southwest, so the cornfields will be plentiful, so the livestock will have something to drink, so our people can collect the water they need.

Karen and I are not veterans. We are both surrounded by veterans in our family and in our communities. Riding for our military families is the least we can do, to pay tribute to all those who have served and to remember our fallen heroes, so we can have freedom.

I ride for my father, who was a Vietnam veteran. While riding to Marseilles, Illinois on Memorial Day, I dedicated that ride to all the Navajo and Hopi veterans whose names are on the Middle Eastern Conflict Wall.

As a board member for Navajo Hopi Honor Riders, I would like to thank all the riders who contribute in honoring all veterans and military families year round. We, (NHHR) are in the progress and planning stages for the upcoming Annual Lori Piestewa Navajo Hopi Honor ride scheduled for Aug. 21, 2021. More information is available by visiting www.NavajoHopiHonorRiders.com.