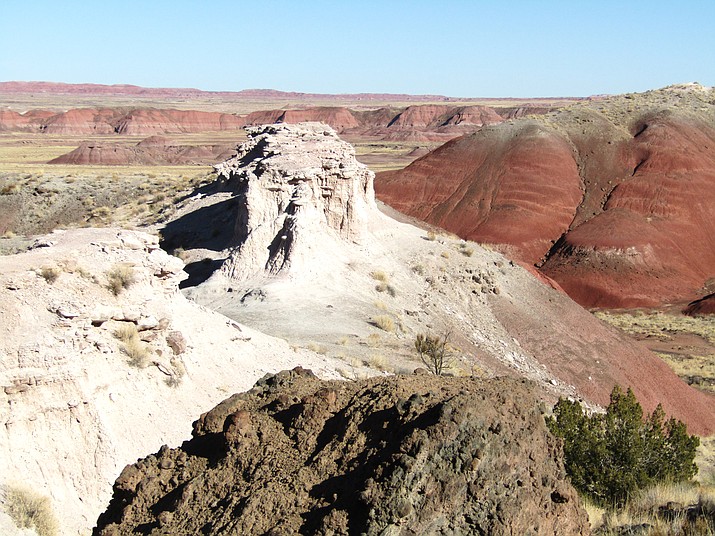 The multicolored geology of the Painted Desert can be seen during a visit to the southeast part of Arizona. (Stan Bindell/NHO)

Badlands is the type of terrain you expect to see in South Dakota and some parts of Utah — not in Arizona. But the Badlands terrain is obvious at Petrified Forest National Wilderness.

Badlands is unique geology with soft and hard rocks without any vegetation and with precipices and buttes, ravines and ledges. Some consider it a maze because there are no regular hiking trails like there would be in a park.

The wilderness has no declared trails, but there are remnants of some where people have walked. Still, you're mostly making your own trail, but finding designated points along the way.

Most of the Petrified Forest Wilderness area hike you can see the Painted Desert Inn so you won't get lost because you can see where you need to return to.

Visitors should note it is illegal to take artifacts from the wilderness area.

A trail begins from the Painted Desert Inn, which is a historic building that was built in the 1920 and is now a museum that is also a National Historic Landmark.

From the parking lot, the trail drops down 300 feet almost immediately using switchbacks at the start of the hike. Once down, there are no major altitude changes, only the walk up and down some hills. The sand and loose rocks can make climbing some of these small hills challenging.

The colorful Painted Desert can be seen from the top of the trail, but is more obvious once you drop down. The various geologies give contrasting colors of red, orange, lavender, black and white.

About four-tenths of a mile into the hike, a small cave appears off to the right. The petrified wood that makes this area so unique starts appearing in small groups — a nice buildup to the large chunks of petrified wood that can be seen later in the hike. 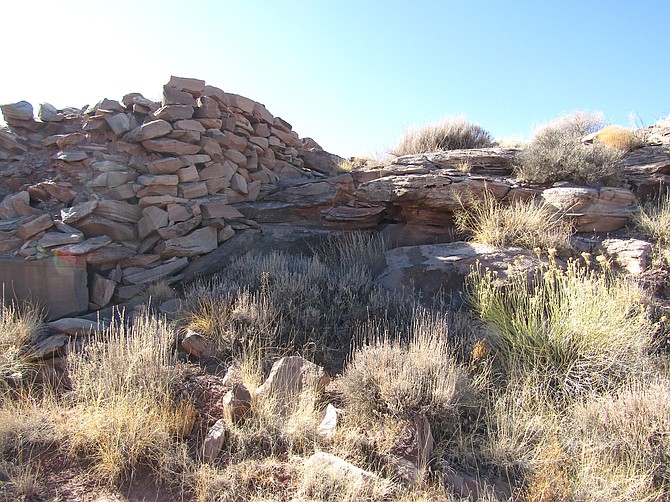 Lore's Bridge was constructed during the 20th Century as part of a roadway system through the Petrified Forest. (Stan Bindell/NHO)

Lore's Bridge, a man made stone bridge, appears a little while later. This is an old stone bridge that was built in the 20th Century by Herbert Lore as part of his road system.

A little further down the trail visitors come to Lithodendron Wash. This wash is wide as a river and dry as a bone, but can have water during wet years. You can walk in the wash for quite some distance.

One highlight that visitors won’t want to miss is the Onyx Bridge. The Onyx Bridge consists of petrified logs which span a small wash. It doesn't look like too much like a bridge, but these large fossilized trunks are worth seeing and a great place for lunch. The fossilized trunks will glisten in the sun as the logs crystallize into quartz.

To the right of Onyx Bridge is a meadow filled with grass. While there are few trees in this wilderness, mostly junipers, there are more than 100 plant species. While there is not a lot of cactus, there is some, so watch where you put your hands or feet.

From here, it visitors can go on to Angel's Garden, which is a garden of petrified logs. There are fossilized plants and animals as well as dinosaur tracks in the Petrified Forest Wilderness.

The Petrified Forest has had an extensive Native American presence.

According to National Park Service literature, prehistoric people built pueblos and traded with distant people. The literature says that Hopi tradition states that villagers moved northwest and joined their people.

More than 1,000 archeological sites have been found in the park. The presence of Native Americans in the park is found through pottery, arrowheads and petroglyphs.

Prehistoric artifacts and native artifacts are protected by federal law. But there is also said to be a curse on people who take artifacts out of the park.

Where is the Painted Desert?

The Painted Desert goes from the Cameron-Tuba City area to the Holbrook area and is found in much of the Petrified Forest National Wilderness.

William Parker, chief of science and resource management at the park, said there are few people in the wilderness areas.

There are many trails in the park, however, and social distancing is not a problem.

Camping is usually allowed in the wilderness areas, but permits are needed and no campfires are allowed. Camping is currently prohibited because of COVID-19 restrictions.

Petrified Forest was designated as wilderness by Congress in 1970 making it one of the first designated areas both in Arizona and in the nation. This wilderness area covers two sections for 50,260 acres with most of it in the 43,000 acre northern section.

Dogs are allowed but should be leashed.

Take I-40 east from Flagstaff or Winslow, get off at exit 311 for the park's north entrance that is closest to the wilderness trail. Drive about two miles to the Painted Desert Inn parking lot at Kachina Point.

Most Arizona hiking books don't have much on the Petrified Forest Wilderness, but two good reference books are "100 Hikes in Arizona" by Scott Warren and "Walks of a Lifetime in America's National Parks" by Robert and Martha Manning.

More information about the Petrified Forest National Wilderness is available at (928) 524-6228.