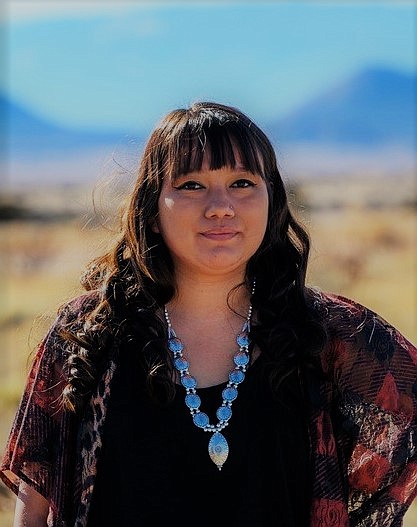 TSAILE, Ariz. — Shaina A. Nez is a Bachelor’s of Fine Arts program coordinator and adjunct instructor of English and Fine Arts at Diné College who was recently published in the Massachusetts Review.

Nez’s essay, “Diné Abecedarian,” enlightens the alphabetic sequence of the Diné language in a literary form and was printed in the Winter 2020 edition of the publication.

“I began this piece in January 2020, during my graduate residency program at the Institute of American Indian Arts in Santa Fe,” Nez said. “Each letter encompasses a story and form that evolves using creative non-fiction and certain oral and creational stories. I wrote this essay to remind myself of the foundational stories I carry by capturing my surroundings that shape my aesthetic.”

The Winter 2020 issue of the Massachusetts Review is a special issue featuring Native and Indigenous writers and artists. The issue contains more than 30 contemporary writers from around the U.S.

“I anticipate the target audience to be fellow creative writers, (Massachusetts Review) subscribers and anyone who appreciates Native American literature and art,” Nez said.

Nez is from Lukachukai, Arizona. She graduated from Holbrook High School in 2008 and graduated from Diné College with an associate of arts degree in liberal arts in 2011. Nez went on to graduate in 2014 from Fort Lewis College in Durango, Colorado, with a bachelor’s degree in English. She possesses a master’s degree in creative writing from the Institute of American Indian Arts (2020).

The publication can be viewed on the Massachusetts Review website. Nez called the writing, “A collection of my surroundings — creational, childhood, familial history, Native American history, parenting, seasons of change and cultural teachings.”

Nez was a finalist for the 2020 Eliza So Fellowship for her work entitled, “Sun Child.” Nez is currently a 2021 Desert Nights, Rising Stars Writers Conference Fellow from the Virginia C. Piper Center for creative writing at Arizona State University.

“We are honored to present to you the very first Massachusetts Review issue focused on Native American writing,” reads the preface of the publication. “This issue, as it was first imagined, was set to coincide with and push back against Massachusetts’s planned celebration of the four hundredth anniversary of the Mayflower voyage and the settlers’ arrival at Plymouth. Instead of commemorating the settler colonial narrative that surrounds the founding of Plymouth Colony, we sought instead to celebrate Indigenous narratives, not only from the Northeast but also from all of what is now the United States.”

The Massachusetts Review is a literary quarterly founded in 1959 by a group of professors from Amherst College, Mount Holyoke College, Smith College and the University of Massachusetts at Amherst. The publication bills itself as a quarterly of literature, the arts and public affairs.