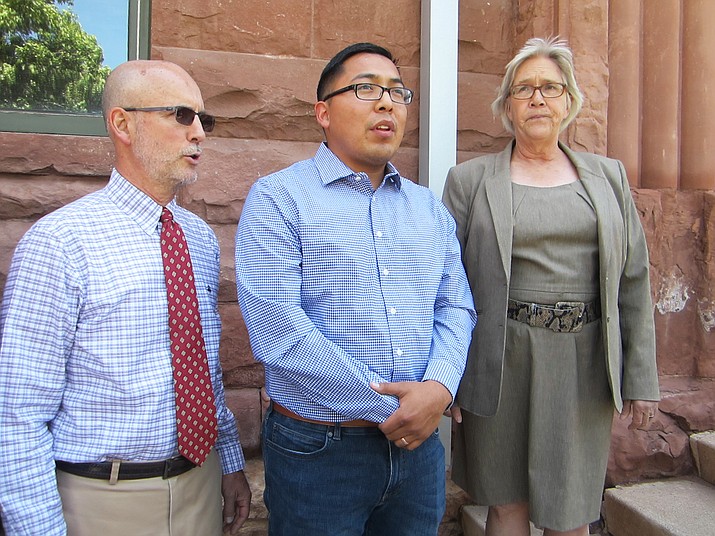 Tremayne Nez (center) speaks to the press June 28 at Flagstaff Superior Courthouse in Flagstaff regarding his arrest in a drug sting by law enforcement. Nez was incorrectly identified during the arrest and spent 30 hours in jail. (Katherine Locke/NHO)

FLAGSTAFF, Ariz. (AP) — An Arizona man who was wrongfully arrested on suspicion of selling LSD has reached a settlement with the city of Flagstaff.

The settlement finalized Jan. 11 came nearly seven months after Tremayne Nez, who is Navajo, filed a federal lawsuit accusing Flagstaff police of ignoring evidence that showed he wasn’t a drug dealer. The city said it cleared the arrest as soon as police became aware of what they said was a case of mistaken identity and apologized.

Nez’s attorney, Gary Pearlmutter, declined to discuss the financial terms of the settlement. He said the city agreed to help ensure all court and law enforcement records clearly indicate Nez is innocent and to pursue dismissal of the charge with prejudice, meaning it can’t be refiled.

Nez himself said he appreciates the police department’s recognition of accountability and truth.

“My family and I are happy this nightmare is now behind us, and we can move on with our lives,” he said in a statement to The Associated Press.

In a December letter to Nez and his wife, Marcella, police Chief Dan Musselman said the department “appreciates the emotional trauma that Mr. Nez and his family experienced and hope that he is now able to pursue his professional goals.”

Nez and his wife initially offered to settle the matter for $350,000, but the city didn’t respond to a notice of claim, paving the way for the lawsuit that sought the same amount in compensatory damages.

Nez was among dozens of people arrested in 2019 as part of a multiagency operation to nab drug dealers around Flagstaff. Police worked with a paid informant to purchase several tabs of LSD from a man named “Trey” in the parking lot of an apartment complex where Nez no longer lived.

Nez and the actual suspect shared the same nickname, were in their early 20s, have similar physical features and are Native American, leading to the mistaken identity, police said.

The suspect had longer hair than Nez and a tooth abnormality, and Nez wears glasses.

The lawsuit called into question police department policies on identifying suspects, the timing of police reports and the accuracy of an internal database that showed Nez lived at the same address as the person police were seeking.

Pearlmutter has said his client never should have been arrested. Nez spent more than 30 hours in jail before he posted bond.

The city had asked the court in November to dismiss the case, saying the plaintiffs failed to state a claim for relief on any of the counts.