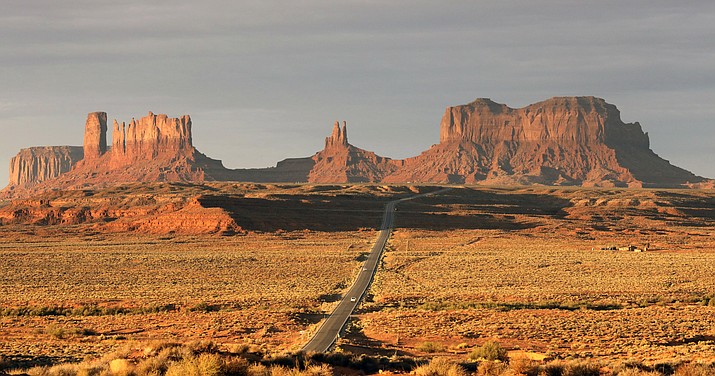 Homes on the Navajo Nation are getting electricity under a program funded by CARES Act money. With the funding expiring at the end of the year, crews are working 10 hours a day, seven days a week to reach more homes. (AP Photo/Rick Bowmer, File)

WINDOW ROCK, Ariz. — The Navajo Nation Office of the Controller said the Navajo Cares Act Hardship Assistance Program is currently 90 percent funded, and the federal extension has not modified its expenditure strategy.

Questions about the Hardship Assistance program or payments can be found at the Navajo Nation Office of the Controller's website or by calling the support center at 1-833-282-7248.

In late December, the U.S. Congress and the White House approved an extension for spending of the Coronavirus Relief Funding (CFR), which was appropriated through the Cares Act, which was originally set to expire Dec. 31, 2020. The extension allows for expending of funds through Dec. 31, 2021.

Once projects are closed out, the Controller expects the total amount available for the Hardship Assistance Program to be approximately $322 million.

The Office of the Controller said the extension has not modified the Navajo Nation expenditure strategy.

“The Navajo Nation Council had resolved for certain deadlines for the funding allocated to specific projects and Divisions,” said Pearline Kirk, Navajo Nation Controller. “When these deadlines lapsed, the funding was reverted to the Hardship Assistance Program. The final expenditure deadline was Dec. 28 at noon. The extension provided no changes to the scope or expenditure timeline for the projects that were approved in previous legislations.

Kirk explained that the total amount of funding in the Hardship Assistance Program is influenced by a number of factors.

She said divisions and sub-recipients, such as money that was granted to Navajo Tribal Utility Authority or other organizations by the Navajo Nation, are still reconciling their final expenditures and awaiting invoices from vendors to be able to close out their grants.

But, Kirk also said, the federal extension is having a positive impact on the Navajo Nation, specifically on the Hardship Assistance Program.

“It was previously reported that there were more than 73,000 applicants who would not have been eligible for payment due to missing or incorrect data from the Office of Vital Records database,” Kirk said. “The extension provides more time for the Controller’s Office to work through those exceptions beyond Dec. 30, allowing for payment to these individuals if there exceptions can be cleared.”

Kirk said the extension does not modify the anticipated check distribution date or delay it.

There are approximately 10,000 people who still have exceptions or issues with the Certificate of Indian Blood (CIB) or date of birth information that would prohibit them from getting a check. Kirk said there are 4,000 other exceptions for things such as a name mismatch, which typically is because of a maiden name or name change.

“So far, there are approximately 225,000 applicants who have passed all eligibility determinations,” she said, adding that verifications of mailing addresses listed on applications are also being conducted to ensure they are valid addresses in an effort to reduce the amount of checks that may be returned as undelivered, which would further delay a person’s receipt of payment.

“We expect to begin processing payments starting the week of Jan. 18,” Kirk said. “The Controller’s Office is working close with the Health Command Operations Center to ensure the safest distribution of checks possible to reduce crowding both at banks and shopping centers. The discussions with the Health Command Operations Center are focused on ways to reduce crowding by cutting checks in waves and revisiting the will-call option.”

If applicants previously selected the will-call option, meaning they want to pick up their checks in-person, they may receive a delay in getting their payments. If an applicant has a mailing address, they can send an email to nncareshelp@nnooc.org or call the support center at 1-833-282-7248.

“This will allow for a faster processing time,” Kirk said.