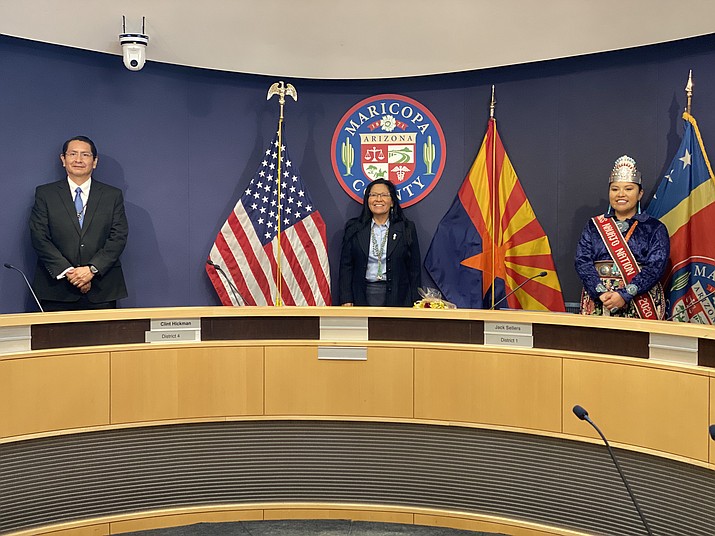 Deborah Ann Begay becomes the first Native American to be elected to serve as judge with the Moon Valley Justice of the Peace in Maricopa County. (Photo/OPVP)

PHOENIX, Ariz. — On Jan. 8, Navajo Nation President Jonathan Nez administered the oath of office to Deborah Ann Begay, a member of the Navajo Nation, who became the first Native American to be elected to serve as a judge with the Moon Valley Justice of the Peace in Maricopa County.

Begay was sworn in during a ceremony held at the Maricopa County Board of Supervisors Administrative Building in Phoenix, Arizona. Begay was joined by her three children, and longtime friends and supporters for the swearing-in ceremony, with CDC guidelines in place.

Nez thanked Begay for allowing him the honor of administering the oath of office on the historic occasion.

“Today, she makes all of our Navajo people proud as she makes history by becoming the very first Native American to hold a judge position with the Moon Valley Justice of the Peace,” Nez said. “Her remarkable professional, military, and educational background along with her community involvement and leadership will bring a new and diverse perspective to Maricopa County and serve the people well. I’m sure that all of our ancestors are very proud of Judge Begay and her family.”

Judge Begay earned her B.A. in Native American History from the University of California, Berkeley, and her J.D. from Arizona State University's Sandra Day O'Connor College of Law with a focus on Federal Indian Law. Prior to attending to law school, Deborah worked in software project management in the Silicon Valley. She was a McNair Scholar while attending UC Berkeley. While in law school, she was an Udall Foundation Congressional Fellow, working for the White House Council on Environmental Quality. She is also a veteran of the United States Navy. She has proudly served 14 years in the Naval Reserves.

Miss Navajo Nation Shaandiin Parrish was also in attendance to offer her support and encouragement for Judge Begay and her family during the swearing-in ceremony.

“You are breaking barriers and another glass ceiling for our Navajo people today. It’s a beautiful event for all of us to witness and I look up to you as a young Navajo person myself. It’s wonderful to see you using your education and professional experience to move forward and I’m excited to see what you do next,” Parrish said.

Begay is a single mother of three children. Prior to winning her election for the Moon Valley Justice of the Peace, Deborah worked for the Arizona Department of Education, Policy & Government Relations as a Tribal Policy Specialist. She is a sought after public speaker on matters concerning restorative justice, tribal sovereignty, LGBTQ+ inclusive practices in the workplace, theological perspectives as they relate to social justice and building diverse community partnerships.

Following her swearing-in, she thanked her supporters and also acknowledged the financial support that she received from the Navajo Nation that helped her complete her undergraduate degree from UC Berkeley and Juris Doctor from Arizona State University.

“The Navajo Nation has always been supportive of my education. As President Nez said, we are excited to see young people rise up in the ranks,” Begay said. “Education is what will get you out of where you are and where you want to be. I’m honored to be the only Native American judge in Maricopa County. For the President to come here and bestow this honor upon me is very humbling and it’s also a reminder to me and other Diné that we have a voice. I take this role that I have very seriously and I intend to always bring honor to my people.”