Ditch driver: ATV purchase to help with irrigation needs on 630-acres of farmland 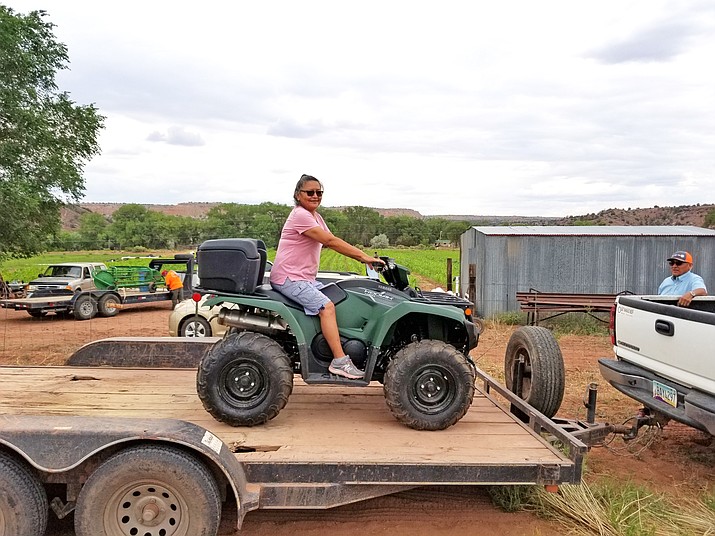 GANADO, Ariz. — After receiving a $10,000 grant from the First Nations Development Institute of Longmont, Colorado, the Ganado Farm Board (GFB) was able to purchase an ATV that will aid in water irrigation delivery to Ganado farmers.

The Ganado Farm Board is a recognized entity of the Navajo Nation. Its purpose is to collaborate with various agricultural groups to ensure proper operation, maintenance and improvement of its irrigation system and to promote farming.

The board is made up of three elected officials who oversee the Ganado Irrigation Project consisting of approximately 630 acres of farmland.

One of its mission is to collect the annual water operation and maintenance fee from land use permittees (farmers). The fees collected are used to hire a ditch rider who then helps deliver water to farmers during the irrigation season.

According to GFB, the fees collected were not enough to purchase a vehicle to help with the ditch riding tasks.

Over the years, some farmers volunteered their time and resources, including personal vehicles and helped operate and monitor the entire irrigation system, however, this was not ideal and board members were excited to receive the grant money to be used by a ditch rider.

“This ATV and related accessories will assist with this work as it will be used to operate and monitor irrigation water delivery on the Ganado Irrigation System during the irrigation season,” GFB members stated.

Monitoring is conducted several times weekly and on weekends which requires driving to and from the Ganado Dam to open, close and monitor the irrigation gate for water delivery.

GFB said having a ditch driver is important, since several farmers may irrigate in one day, which requires going to the dam five to six times a day. These tasks require a vehicle or an ATV.

“Since the Ganado Dam reconstruction in 1995 the primary goal was to bring farms lands back into agricultural production,” GFB stated.

According to GFB, as farmers bring their lands back into production, increased agricultural revenue from primary producers will result in an important economic multiplier in the area.

“This effort will sustain traditional Navajo crops and food products, generate revenue and increase employment among a population desperately in need of all three,” the board said.