What’s in a name? Hopi students weigh in on the use of Native American mascots 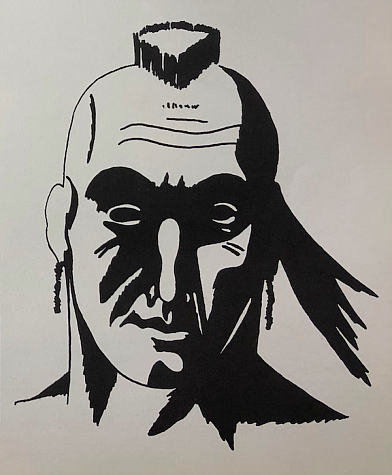 The current version of the Indian mascot in the 1966 PV yearbook, “The Warrior.” The Indian head mascot and nickname were retired in June of this year. (Photo courtesy of Pascack Valley High School student newspaper)

As NFL and MLB teams, such as the Washington Redskins and Cleveland Indians have dropped the use of Native American mascots, colleges and high schools across the nation are being challenged about their use of mascots.

The name of the school’s student newspaper was changed from Smoke Signals to Pascack Valley Student Publication. The newspaper dropped the name after the school removed its mascot name. A new school mascot and name for the student publication will be chosen.

“We not only learned about what their lives were like growing up on the reservation, but we were also able to better understand their views on the topics such as the Indian mascots which was imperative information for the Pascack Valley Student Publication’s “What’s in a Name?” package,” she said. “We learned that they did not support Indian mascots and that they (feel mascots) misrepresented the indigenous cultures.”

Shah said Hopi students talked about how opportunities were scarce, but they learned how and when to take advantage of them whenever possible.

She said Hopi students were willing and enthusiastic to help the Pascack Valley students in their endeavor and provide them with the best information possible.

Lacey Tewanema, a former Hopi High student who earned a BA in journalism and Native American studies, said the mascot issue is much bigger now than when she was in high school. She said many people don’t realize that using Indians as mascots goes back to the days of colonialism.

“Redskins is a racial slur, but it doesn’t seem that way when it’s used as a mascot because it’s being used in a different way,” Tewanema said.

Tewanema, who is working on a masters in legal indigenous studies at the University of Oklahoma, said some people believe mascots honor Native Americans. But she said that is not the case.

“It goes back to days of scalping. Scalping was not done by the natives,” she said.

Tewanema said her grandfather’s generation saw nothing wrong with mascot names “because they lived through it.”

“It was inappropriate and I’m glad their dropping the name,” she said.

Lorene Nequatewa, a former Hopi High student, said she finds the use of mascots offensive and compares it to Christian schools saying they would not want Jesus used in a disrespectful way.

Nequatewa said people should use common sense when it comes to using mascots.

“What if it was your religion or culture they were using?” she asked.

Pascack Valley High School Editor-in-Chief Ellie Kim said the mascot topic is highly controversial and one that has been brought up multiple times by Pascack Valley community members.

“As reporters, we felt like it was our responsibility to explore the topic, especially because the Pascack Valley High School mascot used to be an Indian,” she said.

The mascot and nickname were retired in June of last year.

Kim said it seemed to them that information and coverage of the usage of Native American imagery and history were not as deeply explored in their community. Last October, Pascack Valley journalism students began rallying around creating a series of articles exploring those topics. The package has news, features, and will have opinions and an editorial as well.

“Our goal of the package was not to advocate or show a particular bias toward the mascot topic, but to provide coverage for our community and explore the topic as reporters,” Kim said.

However, Kim said Native Americans were not directly involved in the process and said there are mixed feelings in the community and school about the mascot.

“There are many people on both sides — some support the removal of the mascot, while others wanted it to remain the same," she said. "There are also many people who felt impartial to the mascot and didn’t have particularly strong opinions on its removal.”

Kim said the topic of Native American imagery is one that isn’t talked about enough, especially because having a controversial mascot is not a situation that’s unique to the Pascack Valley district. Many schools throughout the country and national sports teams still have Indian mascots or mascots that involve Native American imagery.

“I think that the conversation regarding these mascots--and ultimately the decision of whether or not these mascots should be used--should be put in the hands of Native Americans,” she said.

Those interested can read the complete series by Pascack Valley High School’s coverage of the removal of the Pascack Valley Indian mascot on their publication’s website. They currently have 12 articles published as part of their “What’s in a Name?” coverage package and are planning on publishing more in the upcoming weeks. You can read all of the articles here: https://pvsmokesignal.com/category/whats-in-a-name.