Penalties for using cellphone while driving kicked in Jan. 1 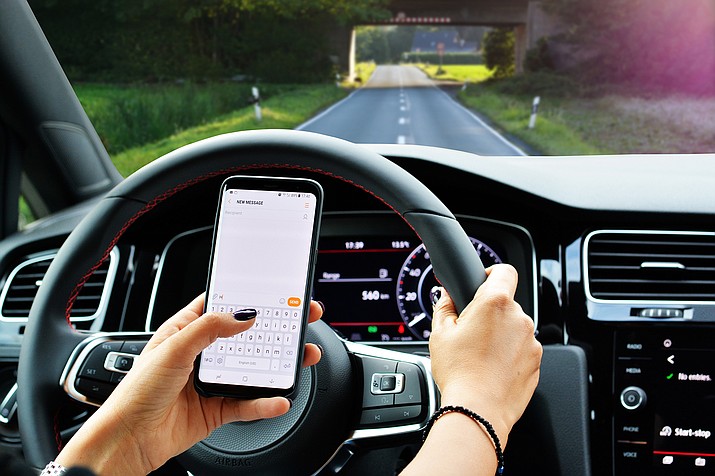 PHOENIX (AP) — Arizona drivers who have ignored a 2019 law that bans holding a cellphone behind the wheel be warned: Breaking the law is going to cost you starting Jan. 1.

That’s when police statewide can stop drivers and issue tickets that come with fines between $75 and $149 for a first offense, plus other fees. A second or subsequent offense is even more pricey, with fines of $150 to $250.

Arizona was one of the last states in the nation without a cellphone ban until lawmakers passed the law. It came after years of failing to muster a majority vote in the Legislature because of opposition from many Republicans. They opposed what they saw as an unnecessary infringement on personal responsibility despite compelling testimony from families who lost loved ones in crashes caused by distracted drivers.

That changed in January 2019, when Salt River tribal police Officer Clayton Townsend was struck and killed by who investigators said was a distracted driver on a Phoenix-area freeway. His death led to broad backing of the measure and it passed by wide margins.

State Sen. Kate Brophy McGee led the 2019 charge to enact a statewide ban on cellphone use behind the wheel.

“When I met the family of Officer Townsend and others who came to the Legislature year after year, it just pulls at your heartstrings,” Brophy McGee said. “Their loved one isn’t coming home to them anymore — and it’s because somebody got distracted and looked away and ended a life.”

Gov. Doug Ducey signed the ban in April 2019. While it took effect immediately, a provision barred any fines until Jan. 1, 2021.

Once the law passed, only Montana and Missouri were left without broad bans on using cellphones behind the wheel.

Arizona’s law applies to texting, talking, looking at a map, using the internet or watching videos while holding a phone. A car-mounted cellphone can be used for navigation or talking in hands-free mode.

The only exemption is for making emergency calls. Drivers also can handle their phones while stopped at a red light or parked.

A large number of cities had instituted their own cellphone bans, but they will be superseded as the state law takes full effect.

Brophy McGee, a Republican who lost her reelection bid in November, said she knows the law will have an impact.

“You always want as a legislator to say you made a difference,” she said. “I honestly believe this will save lives and has already saved lives.”