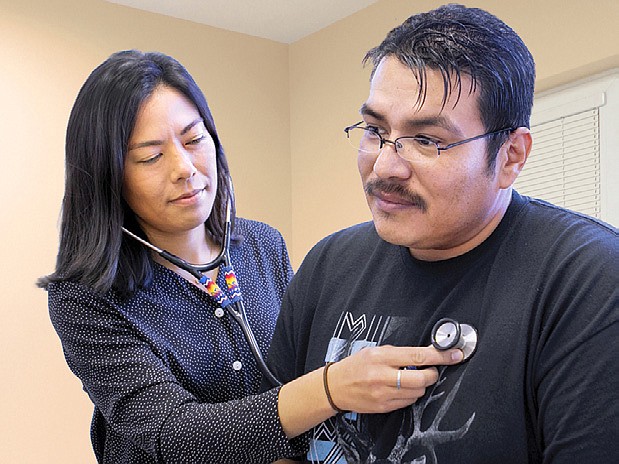 WINDOW ROCK, Ariz. — As part of a $2.3 trillion omnibus appropriations package passed by Congress Dec. 21, the reauthorization of a Special Diabetes Program for Indians (SPDI) allows for the continued services addressing health issues on tribal lands throughout the U.S.

The package was signed into law by President Donald Trump Dec. 27 and supports 300 Indian Health Service, tribal and urban Indian programs in 35 states.

The Navajo Nation has used past funding from the program in its fight against diabetes.

According to Navajo Nation President Jonathan Nez, the three-year reauthorization provides long-term stability for the program, which is important for planning and strategizing.

“The program has improved the quality of life for many and saved many lives,” Nez said.

According to Indian Health Service, Native Americans have the highest rates of Type 2 diabetes in the United States. Diabetes prevention and treatment efforts are important priorities to decrease the onset of diabetes and its complications.

Tribal leaders across the nation have identified the program’s flexibility to be a strong element of SDPI’s success because it enables grantees to adapt each program for their community.

Additionally, the program empowers tribal nations to make decisions at a local level, to choose best practices and adapt the program to be culturally appropriate.

“Over the last few years, the Special Diabetes Program for Indians has received short-term extensions, so it’s very uplifting and great to see that the program will continue for the next three years with the support of the Trump Administration and Congress,” said Navajo Nation Vice President Myron Lizer. “SDPI is one of the most successful public health programs for tribes and continues to make a positive difference in the lives of our Navajo people.”

“Continued federal investment in the Special Diabetes Program for Indians is essential for saving lives and improving diabetes health care outcomes for this country’s first people,” Nez said. “The national and regional support for this program provides tools and trainings that help build a strong workforce under the Navajo Department of Health. The program’s employees are skillful in providing culturally appropriate services and care.”

As a direct result of SDPI, a recent study found that the prevalence of diabetes in American Indian and Alaska Native adults decreased from 15.4 percent in 2013 to 14.6 percent in 2017.

A lower rate of diabetes means more American Indian and Alaska Native can live healthy lives, free of diabetes and the diseases that are worsened by diabetes, including kidney failure, eye disease, and amputations.

Fewer cases of diabetes also conserves federal spending by the Indian health system. In 2017, it was estimated that medical costs attributable to diabetes was approximately $9,601 in excess medical cost due to diabetes per person.

“We thank the members of Congress, Navajo Department of Health, Indian Health Service, National Indian Health Board, and many other advocates who continue to support the program,” Nez said.