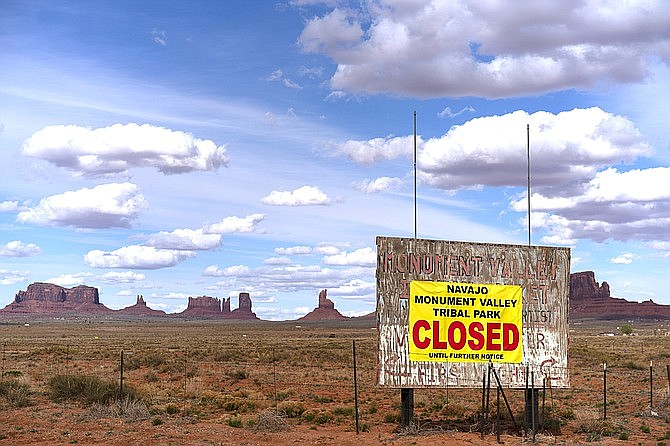 A sign is posted at the entrance of Monument Valley in Oljato-Monument Valley, Utah, on the Navajo reservation in April 2020 announcing the closure of the tribal park. Since the coronavirus pandemic began, the reservation has reported some of the highest number of cases in the country. Now, the tribe is making vaccinations a priority for all members. (AP Photo/Carolyn Kaster)

“Keeping safety in mind, we are not committed to this date and want to be good neighbors by incorporating the Navajo Nation’s interests in our plans,” Keable said.

During the meeting, members of the Nation’s Resources and Development Committee (RDC) presented their concerns for the safety of both Navajo Nation residents and Grand Canyon tourists in the event of a reopening.

“The purpose of our current health order is to expand the vaccine distribution and contribute to the Navajo Nation’s economic recovery plan. But, it is a balancing act and a race against time,” said Deputy Chief of Staff for the Office of the Navajo President, Milton Bluehouse, Jr.

Bluehouse indicated the Navajo Nation leads the country in vaccine distributions with more than 2,000 Navajos vaccinated on the weekend of Feb. 6.

Navajo Nation Department of Health Executive Director Dr. Jill Jim said the Nation is focused on staying ahead of a possible third COVID-19 positive case surge with new variants of the virus reported in surrounding states.

Parks and Recreation Manager Martin Begaye then provided an overview on the department’s response to security enforcement and economic challenges during the pandemic.

“The Navajo Nation is not completely shut down and we still see a lot of traffic and people trying to enter our parks on weekends and after hours,” Begaye said. “We have rangers patrolling and sitting at the gates, but people still find ways in.” 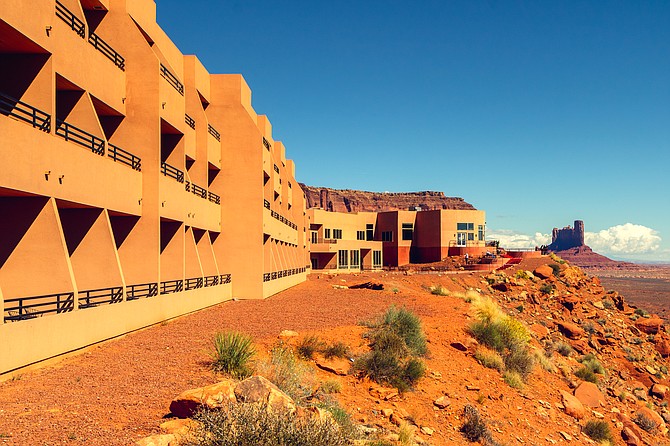 Businesses in some areas of the Navajo reservation continue to see the impacts of the 2020 coronavirus pandemic. The View Hotel in Monument Valley, Arizona refunded $2.5 million in September 2020 after they were forced to close. (Photo/Adobe stock)

With the Navajo Nation under a level-red declaration red, the highest COVID-19 concentration-code level, Begaye said many in-person services, such as tours, have been canceled. Consequently, 15 to 20 of the 75 department staff have lost their jobs or have been furloughed.

Dr. Jim explained the HCOC’s data-driven approach to creating gating criteria for determining the Navajo Nation’s Covid-19 code levels involves an evaluation of the number of positive Covid-19 cases and other factors related to the spread of the virus.

Although Covid-19 numbers have gone down, Navajo tribal parks are not able to open until the Navajo Nation is in the orange phase.

“I am sure individuals like Mr. Begaye receive a lot of criticism, considering the dire impact that Covid-19 is having on our people and economy. But he, too, is doing his best to protect the public by following the heath command oversight,” Nez said.

The last report was relayed by The View Hotel owner Amanda Ortega of Monument Valley.

As a Navajo business owner, Ortega explained the financial challenges she and her staff have experienced since the pandemic began in March 2020.

The View also runs a gift shop and restaurant that employ approximately 130 individuals who are mostly local Navajo citizens.

“Many of my employees have nothing. Unemployment has run out and I have seen so many get their vehicles (repossessed),” Ortega said. “We’ve had to sell everything in the hopes that we can reopen as soon as the Navajo Nation goes Orange.”

Nez recalled witnessing a Navajo family lose their truck in New Mexico and suggested a work session with the Navajo Nation Department of Justice be held to address the Navajo Nation’s protections from such seizure laws.

Ortega indicated the Monument Valley Tribal Park previously received over 150,000 visitors annually. She said The View had to refund $2.5 million in September 2020 after they were forced to close.

As a result, Ortega said her business struggles to uphold their commitments to helping veterans and tour companies while paying monthly utilities, debt payments and other investment obligations.

“While the border town businesses are thriving, our people are having to choose between an electric billl and their dinner and I feel for them,” Freeland said. “We need to take more steps to consider phase plans to rebuild our economy. This virus has killed so many dreams and many of these businesses are closing for good.”