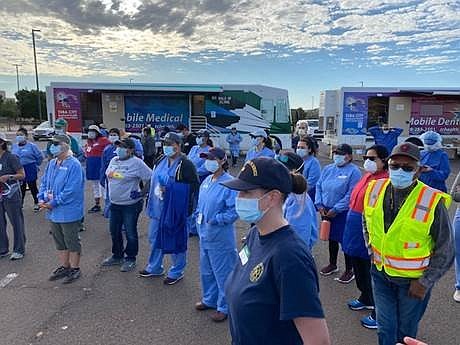 TUBA CITY, Ariz. — Officials at Tuba City Regional Health Care Corporation (TCRHCC) said there is hope as vaccines are available for the community and the number of people with the coronavirus has been dropping for the past week and a half.

Walters said the federal government, the Navajo Nation and the state governments have helped the medical center in various ways during the COVID-19 outbreak.

Walters said one of the biggest concerns during the pandemic has been with staffing — needing more bedside nurses, respiratory therapists and lab workers.

Walters said staffing levels were not at the level they wanted prior to the coronavirus pandemic. These levels did not start to get better until the end of summer.

When outbreaks occurred after Thanksgiving and Christmas, the hospital became concerned about staffing levels again.

“The beds were filled, but now the numbers are going down,” she said.

Walters said the Department of Defense and state of Arizona provided surge nurses to help fill nursing vacancies during the pandemic.

Some nurses who were deployed to TCRHCC for six weeks while others were deployed for 14 days. Now, many are slated to leave at the end of February.

“We’re grateful to have them,” Walters said. “We may request extensions. We will be watching this. We need more staffing for our inpatient unit."

She said the hospital is looking at different options to recruit more nurses.

“We were fortunate with the Navajo Nation response,” she said. “But we still have vacancies.”

Despite the many long hours and shifts, medical workers remain dedicated to their mission of helping patients, Walters said. 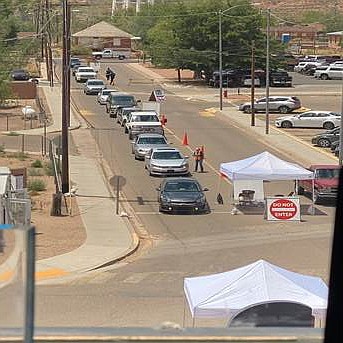 She said many medical staff have sacrificed their time and continue to care for family members at home.

“These are good people, but they are exhausted," she said. "It’s been a long 11 months.”

Christopher Curley, president of the board of directors at TCRHCC and resident of the Association of Indians for Self Determination and Healthcare, said staff at the medical center have done a wonderful job, especially when it comes to distributing the COVID-19 vaccine.

“A lot have been detailed from their primary job to get vaccinations into arms,” he said.

Curley said a Navajo Nation Unified Command team was established to get out the vaccine.

Morale in a time of need

Curley said one worry is burnout in staff as they try to keep up with the demand for vaccines.

“But we’re seeing hope at these vaccination events,” he said. “Some are eager to get vaccinations while some have questions.”

Curley said morale among TCRHCC staff is strong considering the sacrifices being made.

“They have their days or moments, but they do their work because they know the importance,” he said.

In response to the pandemic, Arizona created a surge hotline. This is one way TCRHCC knows where to send higher risk patients.

Another concern is space, since TCRHCC needs to separate patients with the coronavirus from non-COVID-19 patients.

Walters said TCRHCC health care workers do have a good supply of PPE equipment and have been tested for COVID-19 and have been vaccinated. They also have mental health services available.

She said before the pandemic, the medical center had a lack of surgical gowns. Many of the gowns they did have were imported from China. When the virus hit, they had to reach out to vendors from various places for the medical gowns.

“The Navajo Nation helped us with obtaining supplies,” she said.

One aspect that has kept the health care center going during the pandemic is community support and the monetary and PPE donations.

“A lot of people from all over wanted to give,” she said.

Walters said some medical equipment companies were rationing orders because they were overwhelmed with requests.

However, Walters said none of the non-COVID-19 patients were treated any differently. The only difference was that they needed to be separated.

“Space was a challenge,” she said. “We had to move things around.”

Walters said the pediatric inpatient unit has also been closed during the pandemic — the 24 bed respiratory care for COVID patients was moved into that unit.

The health care center established a new department to deal with the pandemic, which includes implementing contact tracing.

Curley said another ongoing issue is employee housing. Most of the health care’s housing is for those who are on call 24/7 or essential staff. He said other medical workers have to travel more than 50 miles a day to get to TCRHCC.

Additionally, many health care workers may have children who are at home since most schools are now on virtual learning. He said this is an issue in Tuba City and for most of the Navajo Nation.

About 70 percent of the 988 staff members at TCRHCC are Native Americans.

The college has a pharmacy tech program, which just finished its third group of students, so they can get entry level jobs with pharmacies.

Another class, in cooperation with Dr. Mildred Garcia, is training students as Certified Medical Assistants.

“We need more of these types of programs,” Walters said. “It takes the support of local community colleges.”

TCRHCC has had ongoing training for all its staff during the pandemic practicing all the protocols during this time.

TCRHCC has also continued with its teen clinics at the medical center.

Teen clinics at the high schools have closed and are all learning virtually, however they continue to offer mental health services for teens.

Curley said the board remains appreciative of the staff who are working hard to get the vaccines out and said they are thankful for the outpouring of support from the community.

He said vaccines at the clinic need to be scheduled, but during vaccine events people can just drive up.

TCRHCC has 10 board members, but currently has vacancies for seats from Hopi and San Juan Southern Paiute.

“Zoom meetings are now the norm,” he said for those intersted.