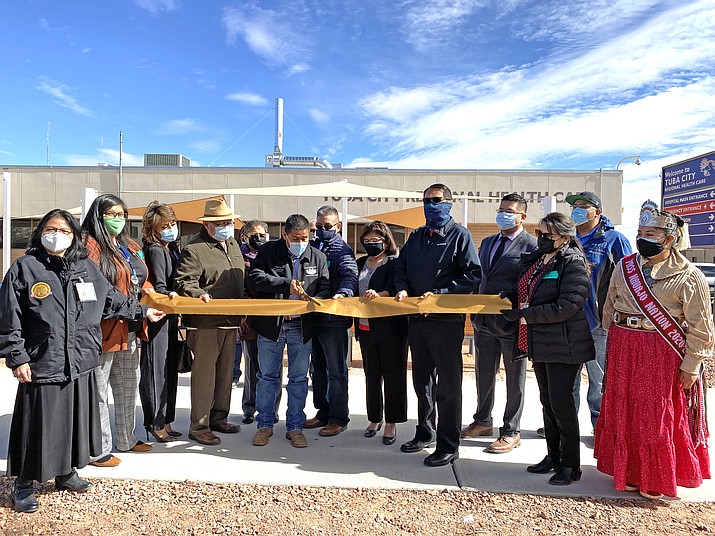 The project was funded with a $32 million CARES Act allocation for NTUA, which also funded the completion of tower projects in the communities of Pinedale, Beclabito, Tsaile/Wheatfields, Chinle, Woodsprings, and summit east located near St. Michaels, Arizona.

Once funds became available in late August, NTUA and other partners expedited the construction of tower projects and fiber optic lines to meet the federal CARES Act deadline.

“With the installation of the new fiber optic line, the local schools, health care facility, first responders, and residents will have increased internet access, which also provides much needed assistance during the COVID-19 pandemic,” Nez said. “We know there are many needs in all of our communities and our administration continues to work together with all levels of government to address those needs and empower our Navajo people to help themselves as well.”

The nearly five-mile long fiber optic line was funded with CARES Act funds that were allocated and approved by the 24th Navajo Nation Council and signed into law by Nez in August 2020.

The project includes 25,000 feet of underground fiber optic line and 2,000 feet of ariel line that also increases broadband access for the community.

“It’s wonderful to see the partnerships and team work over the years come to fruition for the benefit of many in the Tuba City region. The pandemic has increased the need for fiber and broadband internet service across the board, so this project will bring many benefits for teachers, students, first responders, health care workers, and many others,” said Navajo Nation Vice President Myron Lizer. “We are very thankful to NTUA Choice Wireless, Tuba City Chapter, Delegate Otto Tso, Supervisor Lena Fowler, the 24th Navajo Nation Council and many others who advocated and laid their hands to this great work.”

The Nez-Lizer Administration also worked with Navajo Area Bureau of Indian Affairs (BIA) and Western Area BIA to help secure approval for the right-of-way, which allowed the fiber optic line to be constructed through a portion of Hopi land.

On Feb. 10, Nez also spoke about an initiative that his administration is seeking support for which will establish a housing manufacturing facility in the community of Tuba City.

The initiative will help construct homes for residents of the Navajo Nation, including those who reside in the former Bennett Freeze area. Nez stated that the administration will continue to move forward with legislation to secure funding for the housing initiative.