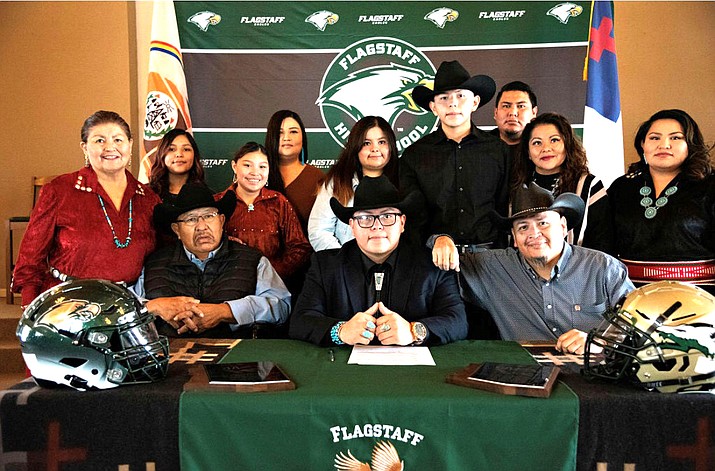 FLAGSTAFF, Ariz. — Flagstaff Eagles offensive lineman Brandon Shirley is taking the next step in his football career after signing with the Gila River Hawks.

Shirley put pen to paper Feb. 5 when he signed with the team, part of the Hohokam Junior College Athletic Conference.

“I’m excited to go back to the valley and show my skills and earn a spot,” Shirley said.

In 2018, the Maricopa Community College District canceled its football programs for financial reasons, and the Hohokam Junior College Athletic Conference was born.

The Hohokam JUCO program is designed to connect with the National Junior College Athletic Association, to allow play in bowl games, and to establish another path for students who want to play football after high school to have a bridge to a four-year college. 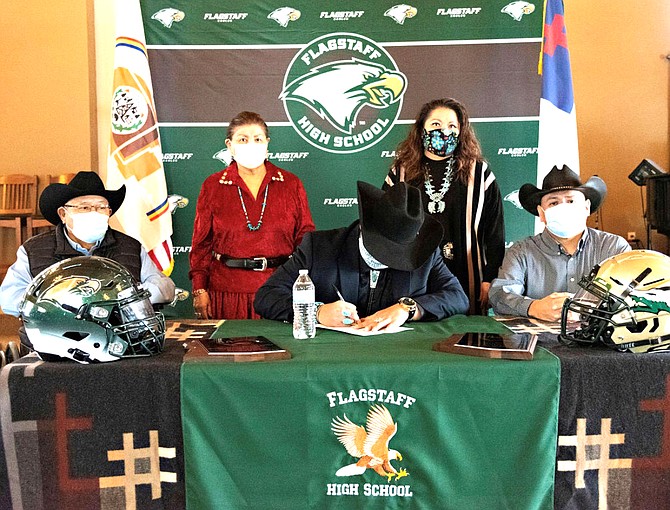 Because Shirley wants to stay in Arizona, he looked into the program and is confident it will help him platform to a university.

“The football program recruits all across the country and the competitive edge is apparent, because these athletes are competitors from 6A football programs, etc.,” said Vincent Shirley, Brandon’s father. “Due to COVID-19 many universities are overlooking them and there’s been no team visits to see the athletes in action, COVID restrictions have really dampened the recruitment campaign processes.”

Following his 2021 graduation from Flagstaff High School, Shirley will attend MCC, where he plans to pursue an associates degree in exercise science, and play for the Hawks.

“I am expected to go there and show my skills for them and possibly get a starting spot on the team as a freshman,” Shirley said.

Originally from Tuba City, Arizona, Shirley has been interested in football since he was a child. He said his father helped guide him in his football career.

“It’s just always been there,” he said. “My dad’s also really been an influence since he came from a very successful football career.”

Shirley said he first learned the game when he played for the Tuba City Boarding School while in middle school.

At Flag High, Shirley played offensive left tackle. Because of the current pandemic, he said this season was unique.

“It was definitely different, the way we had to wear masks, the social distancing and the limited schedule,” he said.

During a typical season, the Eagles will play a 10-game schedule, not including the playoffs. Instead, the team played just seven games during the season.

Now that he has signed to play for the Hawks, his father said he is excited for the opportunities Shirley will have through the JUCO program.

“I’m happy,” Vincent said. “I’m happy he’s going to learn a lot more at the college level, no longer with the high school and high school mentalities – this is the big leagues and the next thing you know he’ll be moving up to the universities, which is even more intense. Being Navajo, that says a lot about him – his skill and technique and his desire to succeed.”

Shirley said his family has supported him in his pursuit of football. Vincent said they will be behind him all of the way.

“Sometimes we may have struggles with finances and such, just to get things done for him, but all in all, we have to pray about it and we move forward and somehow God comes through for us and we’re able to do the things we need to do for him,” Vincent said.