Could SpaceX be a game changer for rural internet in Coconino County? 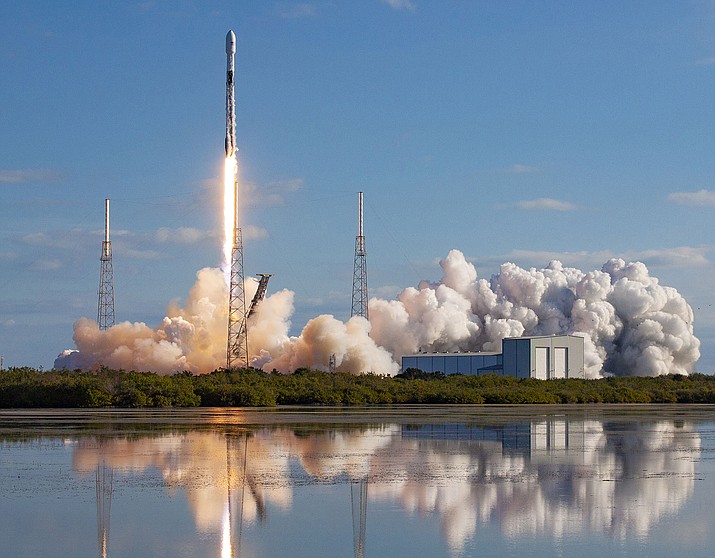 In February, SpaceX launched the Falcon 9 on its eighteenth mission to distribute 60 more low-level satellites in space. (Photo/Space-X)

WILLIAMS, Ariz. — The Coconino County Board of Supervisors met Feb. 2 for an executive session to discuss and get direction regarding the use of SpaceX’s Starlink as a rural internet provider for northern Arizona.

The county’s IT department provided an update and presentation to the board regarding the work they have been doing with SpaceX that began in October 2019.

“We’re exploring using Starlink beta internet options prior to public release,” said Deputy County Manager Joanne Keene. “We’ve very excited to share this progress and get feedback from the board on potential next steps.”

IT Director Matt Fowler said in a December 2020 email that the county is under a non-disclosure with SpaceX and anticipates being able to make public comment within the next 45 days regarding potential opportunities in the area.

“Coconino County is working on several parallel initiatives in an effort to improve services across northern Arizona,” he said.

In December 2020, SpaceX’s Starlink was one of 180 bidders who received a part of the $9.2 billion allocated through the Federal Communications Commission’s Rural Digital Opportunity Fund Phase I auction.

The agency is reallocating money from the $20.4 billion in its Universal Service Fund to subsidize eligible companies to build out broadband infrastructure in underserved areas.

The FCC funding, which will be distributed over the next 10 years, will bring high-speed broadband to over 5.2 million homes and businesses. Nearly 100 percent of the locations will receive broadband with speeds of at least 100/20 Mbps, with 85 percent receiving gigabit-speed broadband, the FCC said in a statement.

The Rural Digital Opportunity Fund program was a reverse auction where companies who submitted the lowest bid for covering a particular area were awarded. However, the company is required to cover that area with broadband services. Winning bidders have 10 years of subsidy payments from the FCC that will be disbursed in monthly installments, and have six years to deploy broadband to the locations.

SpaceX began developing Starlink in 2015 with a plan to use low-Earth orbit satellites in a constellation pattern to work in combination with ground transceivers to deliver high speed internet across the globe.

As of February, Starlink has launched over 1,000 satellites.

On Feb. 12, early risers in northern Arizona were able to get a glimpse of an array of these Starlink satellites over Williams and Flagstaff.

Threat to the night sky

With the interest in low-Earth satellites — Elon Musk is not the only one with an interest in low-Earth orbit satellites, Jeff Bezo’s Kuiper along with companies such as Telesat’s Lightspeed are also joining the internet space race — astronomists have sounded the alarm on the impacts for those who observe the night sky and are looking to advance human understanding of the universe. 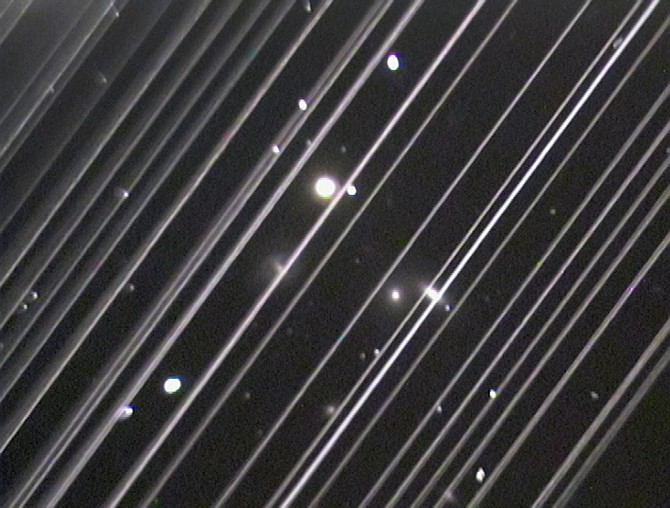 An image of the NGC 5353/4 galaxy group made with a telescope at Lowell Observatory in Arizona, May 25, 2019. The diagonal lines running across the image are trails of reflected light left by more than 25 of the 60 recently launched Starlink satellites as they passed through the telescope’s field of view. (Photo/Victoria Girgis/Lowell Observatory)

“The natural night sky is a resource not just for astronomers but for all who look upward to understand and enjoy the splendor of the universe, and its degradation has many negative impacts beyond the astronomical,” said Lowell Observatory’s Jeffrey C. Hall, chair of the American Astronomical Society’s Committee on Light Pollution, Radio Interference, and Space Debris. “I appreciate the initial conversation we have already had with SpaceX, and I look forward to working with my AAS colleagues and with all stakeholders to understand and mitigate the effects of the rapidly increasing numbers of satellites in near-Earth orbit.”

Organizations such as the International Astronomical Union (IAU) are specifically concerned with the highly reflective metal and reflections from the sun before sunrise and after sunset.

“Although most of these reflections may be so faint that they are hard to pick out with the naked eye, they can be detrimental to the sensitive capabilities of large ground-based astronomical telescopes,” the IAU said.

SpaceX said they are taking steps to reduce the impact of the Starlink satellite constellation on astronomy which include changing the way the satellites fly to their operational altitude, away from the sun, connecting a deployable visor to the satellite to block sunlight from hitting the brightest parts of the spacecraft and applying a dark coating to the reflective antennae on the satellites’ ground-facing side.

“SpaceX is launching Starlink to provide high-speed, low-latency broadband connectivity across the globe, including to locations where internet has traditionally been too expensive, unreliable, or entirely unavailable,” the company said. “We also firmly believe in the importance of a natural night sky for all of us to enjoy, which is why we have been working with leading astronomers around the world to better understand the specifics of their observations and engineering changes we can make to reduce satellite brightness.”

How can I get it?

Although Coconino County is involved with bringing SpaceX’s Starlink to northern Arizona, they have not revealed the role they will take.

However, Starlink is launching 60 satellites per month and is currently taking future orders for their service. The company said orders will be filled first-come, first-served with a $499 start-up fee and $99 per month, with a targeted coverage expected mid to late 2021.