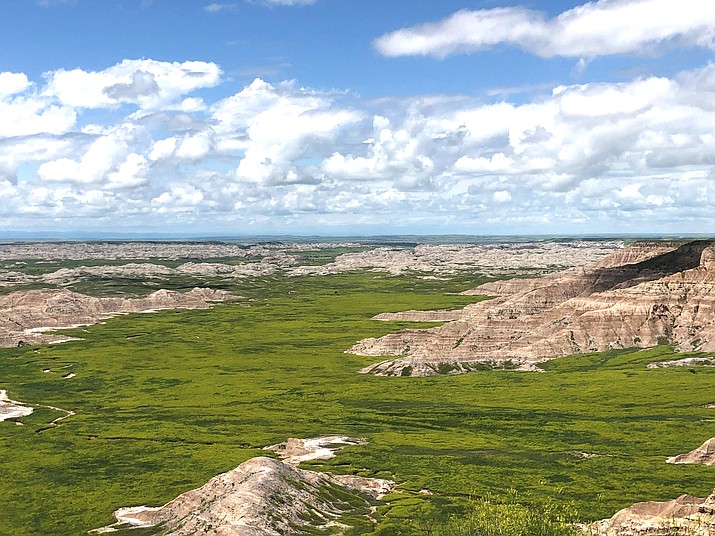 Sheep Mountain Trail is in the Stronghold Unit of Badlands National Park, located on the Pine Ridge Indian Reservation. Oglala Sioux rangers help manage this area of the park. (Photo/Robert and Martha Manning)

FLAGSTAFF, Ariz. — Native Americans played a significant role in the history of America’s national parks, but now are often underrepresented in visiting or walking those parks.

That’s the view of Prescott authors Robert and Martha Manning who recently released their new book, Walks of a Lifetime in America’s National Parks: Extraordinary Hikes in Exceptional Places.

This book shares about hiking trails in national parks around the country along with the beauty and history behind each park. Walks of a Lifetime has stunning color photos and can be used as a guidebook for those planning to visit specific parks.

There are three national parks highlighted in Arizona, two in New Mexico, four in Colorado and five in Utah.

The National Park Service (NPS) encompasses 423 national park sites in the United States. There is an elite group of 62 national parks among them. There is one chapter in Walks of a Lifetime devoted to each of these 62 parks.

Robert Manning said Native Americans have had a huge impact on the today’s national parks. He said many of the parks, such as Mesa Verde National Park, were established to honor and celebrate the nation’s Native American heritage.

“We’ve also learned about how Native Americans managed the land in sustainable ways and this has influenced how the national parks are managed today,” he said.

“Their history in national parks represents such a long time period compared to European-Americans,” he said.

While conducting research for his book, Manning said many Native Americans work as rangers or in other positions in some parks including Badlands National Park in South Dakota

“Most of the park signs were in both English and Oglala Sioux. We enjoyed talking to two park rangers at the visitor center and learning about how the park is being managed in consultation with the Oglala Sioux,” he said. “I also remember taking a float trip on the Colorado River through Grand Canyon National Park to discuss management of the park. The NPS had invited representatives of several Native American tribes to participate and I found that very helpful. The Native American representatives started each day on the river with a short blessing and that really contributed to the morale of all participants.”

Manning said Native Americans have also played a significant role in the national parks in Arizona, especially at Grand Canyon National Park as park managers consult with all the surrounding tribes on issues that might impact them.

“They play an even bigger role at Navajo National Monument where the land is still owned by the Navajo Nation and the monument is managed jointly by the NPS and the Navajo,” he said.

However, Manning said he believes Native Americans remain underrepresented when it comes to visiting national parks.

Manning said the United States needs more units of the National Park Service that celebrate Native Americans. “We also need to tell the stories of Native Americans from their perspective,” he said. “A good example is the way in which the NPS changed the name of what is now Little Bighorn Battlefield National Monument. This new name and the way the park is interpreted present a much more objective and fair treatment of the Native Americans who participated in the battle. Finally, we need to hire Native Americans as park rangers.”

“The parks need to hire more Native American rangers to tell park visitors how Native Americans lived on the land before these areas became national parks,” he said.

About Robert and Martha Manning

Robert Manning is a professor Emeritus at the University of Vermont. His wife Martha is an artist who is inspired by the outdoors.

Walks of a Lifetime in America’s National Parks: Extraordinary Hikes in Exceptional Places is published by Falcon Guides.