New jail project in Prescott moves to next phase 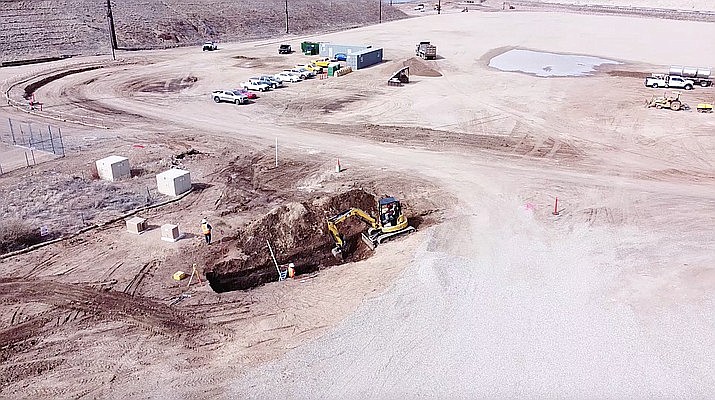 Viewed from a drone, crews begin to dig the trenches for underground utilities at the site for the new Prescott Justice Center and Jail along Prescott Lakes Parkway on Feb. 9, 2021. The county announced this past week that the first phase of mass grading is largely complete. (Yavapai County/Courtesy)

PRESCOTT, Ariz. - With the recent completion of much of the mass grading at the new Prescott Justice Center and Jail site, Yavapai County is now about 15 percent into its $75.6 million project.

The county announced earlier this week that the new Prescott jail project had reached a milestone with the completion of the earth-moving work that was required to make way for the buildings.

Although a few final tasks are still taking place on that phase, County Facilities Assistant Director Bandon Shoults said Wednesday, Feb. 10, “The mass grading is all but done right now.”

Overall, he said, “We are about three months into a 20-month project.” He added that the entire project is scheduled to be complete by August 2022.

Since the November 2020 groundbreaking, Shoults said workers had moved about 190,000 cubic yards of dirt from a “borrow site” in order to raise the elevation of the building site.

In the news release, he said, “By moving dirt from the ‘borrow hill’ just south of the building pad, we didn’t have to move dirt very far and created additional space for county building needs.”

Shoults noted that the jail site, located along Prescott Lake Parkway, had a considerable amount of slope, which needed to be leveled out.

“There was a 10- to 12-foot drop,” he said of the pre-construction condition of the site. For the ease of the day-to-day operations of the jail, he said the site needed to be flattened.

Andrew Baird, the civil project manager for the Kimley-Horn consulting firm, stated in the news release, “When we started work on the Justice Center project, one of the first things we noticed was that the site itself was significantly below Prescott Lakes Parkway. We knew at the outset of design that we would need to raise the elevation of the (building) pad to allow for pedestrian access into the site safely, and recognizing there were historic flooding issues with this site.”

The first objective was to “look at the amount of material it would take to raise the elevation to a workable level, and ultimately, where would that material come from?” Baird added.

On Wednesday, Shoults explained that the earth-moving process had allowed for the creation of “two very useable pads.”

The 96,000-square-foot Justice Center and Jail will be located on the main pad, which consists of about nine acres, Shoults said.

The main pad will also accommodate an 8,000-square-foot connection center, which Shoults said would be used for mental health assessments and connecting inmates who are leaving the jail with needed services.

Along with the nine-acre main pad, another four-acre pad was created. The smaller site is not yet designated for a use, but will be available for future county needs, Shoults said.

With the substantial completion of the mass grading, Shoults said the next phase would involve installation of underground utilities.

Some of that work has already begun, and it will continue in the coming weeks.

By late March/early April 2021, Shoults said work is expected to begin on digging the footings for the building.

Soon after that, he said the steel structure and I-beams would begin to be installed. By late May, the vertical walls will begin to go up.

Shoults said the buildings would be “standard cement block” construction.

In all, the county plans the jail to consist of 152 beds, Shoults said. The design allows for future expansion, although he said, “Nothing is immediately planned.”

In a recent report to the Yavapai County Board of Supervisors, Facilities Department Director Ken Van Keuren said the county plans to spend $24.9 million on the project in the current fiscal year (2020-21), along with $44.5 million in the coming 2021-22 fiscal year, and $3.7 million in the 2022-23 fiscal year.

The jail project has generated considerable controversy over the past year, with detractors bringing up environmental concerns over the site’s proximity to the old Sundog Ranch landfill.

The Arizona Department of Environmental Quality conducted a public meeting on the matter in October 2020 and made a number of recommendations.

County officials agreed with the state department’s recommendations to do additional tests, such as soil gas sampling around former underground storage tanks, but said at the time that the project would move forward.

Assistant County Administrator Jack Fields said this week that the testing has since been done.

A report on limited soil vapors, which the county has posted on its www.YavapaiJustice.com website, indicates “very low,” but still detectable, levels of volatile organic compounds (VOCs).

The report states: “The average concentration in the areas that included the planned development of the criminal justice center is considered very low but exceeded the most conservative residential EPA (Environmental Protection Agency) screening level of 1 in 1,000,000 with a cumulative excess cancer risk of 1.8 in 100,000, and a hazard quotient of less than 1.”

Because the risk is above the most conservative generally accepted cancer risk level of 1 in 1,000,000, the report (done by Speedie and Associates) stated, “The use of a vapor barrier can be considered as a protective measure.”

Fields said the county had already planned to install a vapor barrier below the building. “That is standard, so we were going to do that anyway,” he said, adding that experts have indicated that the barrier would “alleviate any of the minor concerns.” In addition, he said the county plans to do periodic air-sample testing.

More information on the testing results is available online at https://yavapaijustice.com/Documents.