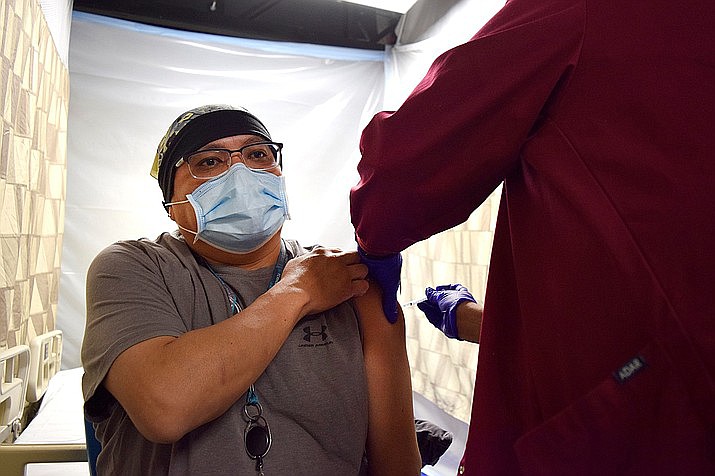 WINDOW ROCK, Ariz. — The Navajo Nation requested more COVID-19 vaccines and additional resources in a February meeting with the Biden-Harris administration officials and federal agencies from the White House, FEMA, Navajo Area Indian Health Service and others via teleconference.

In addition, Navajo Nation President Jonathan Nez and Vice President Myron Lizer said they requested testing kits, medical personnel and other resources to help stop the spread of the virus on the Navajo Nation.

As of Jan. 29, 2021, the Navajo Area IHS reported the Navajo Nation received 64,713 doses of the Pfizer and Moderna vaccines combined, and that 47,455 of those doses had been administered including some second doses.

At the event in Tuba City Feb. 6, Nez said in five hours 1,020 shots were administered.

Nez also pointed out that compared to states across the country, the COVID-19 vaccines are being administered on the Navajo Nation at a high rate.

“We saw thousands of people waiting in long lines to receive the vaccines,” Nez said. “Now that the 57-hour lockdowns are lifted, our healthcare workers are expanding efforts to get the vaccines administered as quickly and efficiently as possible.”

Nez said he appreciates the Biden-Harris administration for meeting with the Nation and the support provided.

“Our message to them was that our health care workers are doing a great job and confidence in the vaccines is at a very high level among our people, so we need more vaccines to meet the demand and to vaccinate as many of our people as possible,” Nez said. “The need is growing greater and greater as we receive more reports of the COVID-19 variants spreading.”

Nez said his administration issued letters to the governors of Arizona, New Mexico and Utah, which said that if states used Native American population numbers to advocate and receive COVID-19 vaccines, then the Navajo Nation should receive its share of those vaccines for Navajo people residing in urban areas.