Endangered wolves sent from Arizona to Texas to aid species 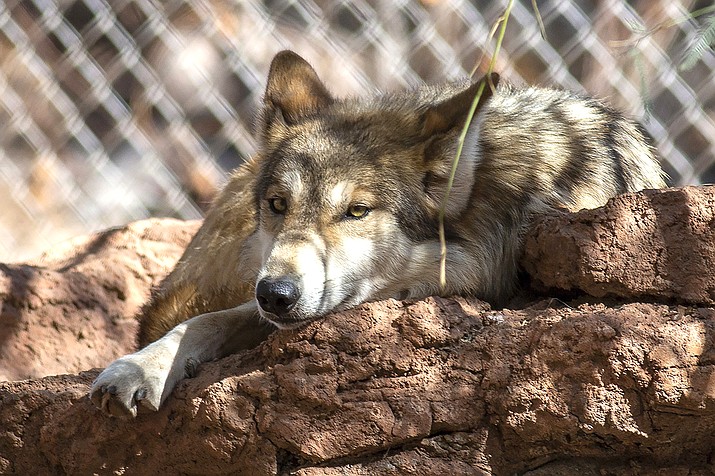 A female Mexican gray wolf rests in an enclosure at the zoo in Phoenix Feb. 4. One pack of Mexican gray wolves is now two, with three sisters remaining at the Phoenix Zoo while their two parents and three male offspring are now in Texas after being moved to the El Paso Zoo as part of a cooperative program to continue recovery of the endangered predators. (Phoenix Zoo via AP)

PHOENIX (AP) — A pack of endangered Mexican gray wolves has been reduced to two.

Two wolves and three of their pups were sent from the Phoenix Zoo to the El Paso Zoo in Texas last month in a bid to bolster the number of predators. Three other pups, all female, stayed in Phoenix, adjusting to an emptier den and establishing a new hierarchy, The Arizona Republic reported.

“They were a little skittish for the first day or two, but they’ve settled in really well. Jade is emerging as the alpha female, followed by Luna then Scarlet,” said Dawn Addelson, a carnivore keeper at the Phoenix Zoo.

The Phoenix Zoo doesn’t have a breeding pair anymore, but it plans to change the enclosure to make it appealing to a breeding female wolf, Addelson said.

The other wolves were transferred under a cooperative breeding program aiming to help the Mexican gray wolf survive.

“We’ve enjoyed having them at the Phoenix Zoo these past few years, but they are needed elsewhere to contribute to making the most genetically diverse matches to help support the ongoing genetic health of wild wolves,” said Bert Castro, zoo president and CEO.

The five wolves transferred to Texas were placed in quarantine at the El Paso Zoo until the first week of February. Animal curator John Kiseda said he was hopeful they will have adjusted to their surroundings by the time the zoo reopens following a pandemic closure.

“We have to see how they react to the new space before they get put onto exhibit. We want to make sure they’re comfortable in their enclosure,” Kiseda said. “So far, they’ve done well.”

Kiseda said he hopes the breeding pair will continue to reproduce so El Paso becomes home to a multigenerational pack.

A subspecies of the Western gray wolf, the Mexican gray wolf was listed as endangered in 1976 after being pushed to the brink of extinction. From the 1960s to the 1980s, seven gray wolves — believed to be the last of their kind — were captured and a captive breeding program began.

Since wolves started being released in the late ‘90s, the wild population has grown by an average of 15 percent in the past 10 years. The latest annual census of the species found 163 wolves in the wild — 76 in Arizona and 87 in New Mexico.