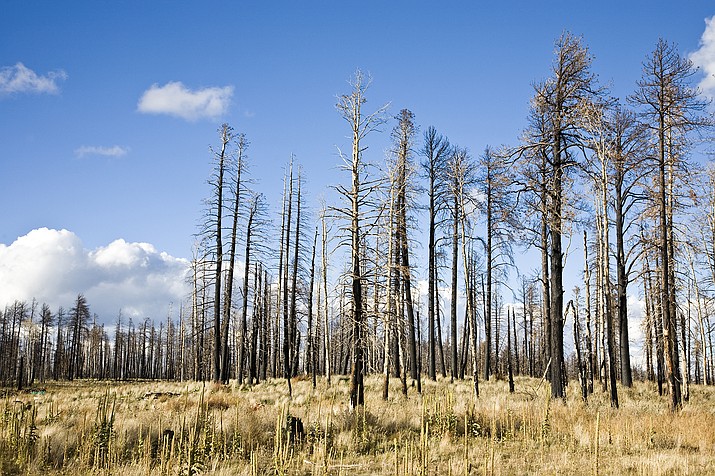 Remnants of a forest fire can be seen on the Kaibab National Forest. (Photo/Adobe Stock)

FLAGSTAFF, Ariz. (AP) — Drought remains in place across Arizona with a likelihood of warm and dry conditions in coming months even after a recent storm dropped heavy snow across much of the state's high country, a 2021 wildfire season outlook says.

Observations indicate nearly all of the state is covered by severe, extreme or exceptional drought, according to the outlook released Feb. 4 by the National Weather Service service's Flagstaff office.

Conditions and indicators add up to above-normal fire threats by April at lower elevations from southeastern Arizona to Yavapai County and similar threats spreading north along the Mogollon Rim by May, the forecasters said.

Currently, "odds are tilted in favor of warmer and drier than average conditions" for February through April, forecasters wrote. "However, there still could be a few episodes of high winds, unsettled weather, and high-elevation snowfall."

The extended outlook for May through June "favors above-normal temperatures, and equal chances of above, near, and below normal precipitation across Arizona," the forecaster added.

With below-normal precipitation recorded so far this winter, drought conditions in Arizona worsened between early 2020 and early 2021, leaving the entire state in drought, compared with 30 percent at this time last year, the forecasters said.

Heat, drought make for miserable combo for Southwest
NOAA: winter weather could be strongest since 1997
State faces typical wildfire season; West Coast could have harsh year
New 'average': Wildfire seasons more severe than they used to be in Arizona
A break in fire weather -- make the most of it!
Contact Us
Submit Questions, Comments, or Story Ideas