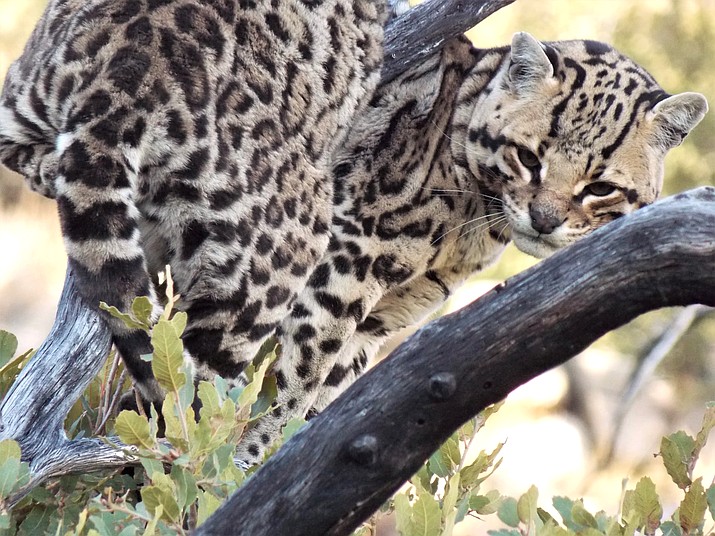 The AZGFD recorded trail images of an ocelot (above) and jaguar in southern Arizona last month. (Photo/AZGFD)

The same jaguar was spotted in November 2016, giving conservationists hope that the endangered cat was thriving.

The Arizona Game and Fish Department (AZGFD) in Tucson shared photos on Facebook Jan. 28 of the elusive jaguar. The rare ocelot also was revealed by trail cameras, but was found in a different location.

The same ocelot has been photographed periodically since May 2012.

The jaguar was caught on camera Jan. 6 in the Chiricahua Mountains/Dos Cabezas, in southeastern Arizona. The ocelot was photographed Jan. 14 in the Huachuca Mountains.

“We continue to have one male jaguar and one male ocelot occurring within Arizona,” AZGFD said.

The animals are currently listed as endangered with limited sightings occurring over the past few years.

Loss of habitat, direct killing of the cats, and depletion of prey are the primary factors contributing to the jaguar’s current status and decreasing population trend.

The biggest threat to the ocelot’s survival is the loss of habitat caused by the expansion of agricultural lands, urbanization, and roads.

Fewer than 100 ocelots exist in the U.S. and are found primarily in south Texas

In April 2019, the US Fish and Wildlife Service (USFWS) and the binational Jaguar Recovery Team completed a recovery plan for the jaguar to help improve the populations of the species in northwestern Mexico and the southwestern United States.

More than 99 percent of the jaguar’s range is in Central and South America, so the plan recognizes the need for cooperation through the 19-country range.

“The binational recovery team’s scientific expertise in protecting the jaguar has been invaluable,” said Amy Lueders, the Service’s Southwest Regional Director, in a press release. “We recognize the challenges involved in conserving and recovering a species with such an expansive international range, and the team has laid out a comprehensive plan with goals that are achievable and realistic.

Due to past habitat loss, it is unlikely that jaguars will be fully self-sustaining throughout their entire historical range. However, conservation of key jaguar populations and habitat — including core breeding and connective areas — will be critical to jaguar recovery, the USFSW said.

Since 1996, seven male jaguars have been documented in southern Arizona and southwestern New Mexico. These jaguars are believed to have come from the nearest core area and breeding population, approximately 130 miles south of the U.S.-Mexico border in Sonora.

Wildlife officials said to achieve delisting, viable jaguar populations must be secured throughout their range. This requires the following:

Providing incentives to protect jaguars and their habitat;

and maintaining and developing partnerships in the Americas, particularly in Mexico.

“Once recovery is achieved and the jaguar is delisted, the states manage the species to ensure its long-term viability,” the USFWS said.