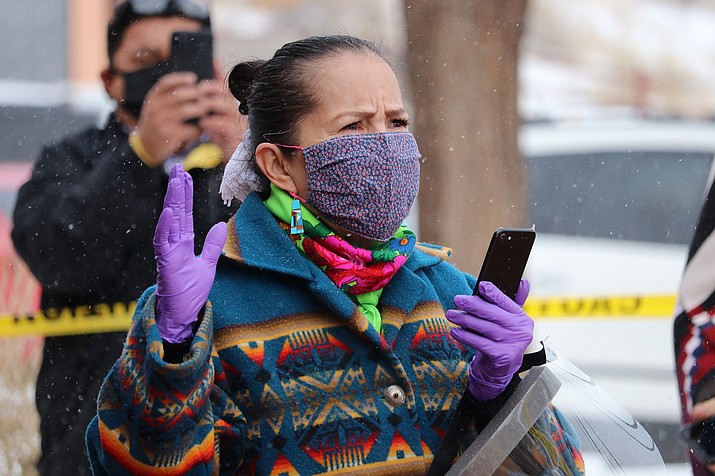 Navajo Nation Chief Justice JoAnn B. Jayne recognized Judicial staff for their hard work and services during the recent pandemic. (Photos/Office of the Justice)

Jayne recognized the hard work and dedication of Judicial Branch staff who continue to serve the public throughout the pandemic.

“Never in the last 61 years of the court system did we know an invisible monster would come before us,” she said.

Jayne highlighted the services provided by the courts even during the pandemic. The continued resilience of the staff allowed for “sister” courts to step in and assist courts that had to close their buildings due to exposure, she noted.

The courts have recently seen increases in cases for repossessions, domestic violence and criminal filings. The courts have also seen an increase in the number of pro bono appointments, which Jayne explained are appointments of counsel for people who need to be represented without charge.

“We have a court system that our naat’1aniis put together in all of these years before us. Long before 61 years ago when our courts became what it is now, we had our naat’1aniis, they had peacemaking and we still have peacemaking at this point,” she said.

Jayne thanked the Navajo Nation Council, Navajo President Jonathan Nez and the Judicial Conduct Commission for their roles in getting four judges and an associate justice on the bench since December 2019.

Getting new judges means that the Diné people who go before the courts have more input, she said. There are currently seven vacancies for district court judge.

“We request that you continue to work with us — Navajo Nation Council and Mr. President and Vice President — in securing more judges for us,” Jayne said, noting that a full judiciary helps to protect Navajo Nation sovereignty.

In the midst of the pandemic, six new Navajo Nation Bar Association members were able to be sworn in. This means there are more attorneys and advocates working in the legal system.


Jayne said there is a continuing need for funding to continue protecting sovereignty and to address the challenges the Branch.

The Judicial Branch continually seeks grants outside of Navajo Nation general funds and has a grants administrator to do so. Jayne said the Branch is currently requesting grant funds for the Peacemaking Program to work on healing issues related to missing and murdered Diné relatives.