Sentencing set for US airman convicted in teacher's killing 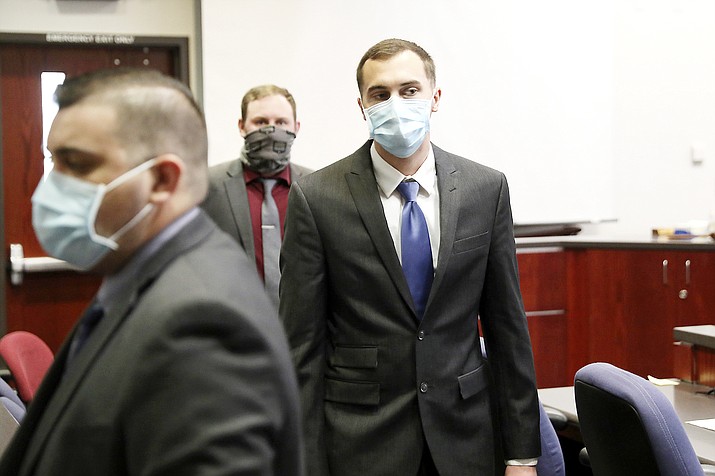 U.S. Air Force airman Mark Gooch, right, looks towards the empty jury box as he is led out of Coconino County Superior Court in Flagstaff, Arizona, Oct. 13 after being found guilty of first degree murder and kidnapping in the January 2020 death of Sasha Krause. The two didn't know each other and lived hundreds of miles apart but shared an upbringing in the Mennonite religion. Krause committed to the church, but Gooch did not. Gooch, 22, faces up to life in prison. (Jake Bacon/Arizona Daily Sun via AP)

FLAGSTAFF, Ariz. (AP) — A U.S. Air Force airman who was convicted of killing a Mennonite woman after kidnapping her in New Mexico and taking her to Arizona will be sentenced next month.

An Arizona judge during a status hearing on Tuesday scheduled Mark Gooch's sentencing for Jan. 19. His attorney and the prosecution agreed they were ready to proceed and asked the judge to schedule the sentencing as soon as possible.

Jurors in October found Gooch guilty of kidnapping and first-degree murder in Sasha Krause's killing. The two didn't know each other and lived hundreds of miles apart but shared an upbringing in the Mennonite religion. Krause committed to the church, while Gooch did not.

Krause, 27, was last seen in January 2020 at the church in her tight-knit Mennonite community outside Farmington, where she was gathering material for Sunday school.

Her body was found more than a month later in a forest clearing outside Flagstaff, nearly 300 miles (480 kilometers) away. A camper collecting firewood spotted Krause face-down among pine needles near a national monument. Krause's wrists were bound, and she had been shot in the head.

During the trial last fall, jurors heard 10 days of testimony from those who knew Krause and investigated her disappearance. They heard from ballistics experts who disagreed on whether the bullet taken from her skull was fired from a .22-caliber rifle Gooch owned.

Gooch's attorney, Bruce Griffen, tried to raise doubt by pointing to a lack of forensic evidence and to testimony about another car seen in the Mennonite community the day Krause went missing. He said Gooch was peaceful and volunteered information to a detective who interviewed him at Luke Air Force Base in metropolitan Phoenix, where he was stationed.

Authorities used cellphone and financial records as well as surveillance video to tie Gooch to the crimes.