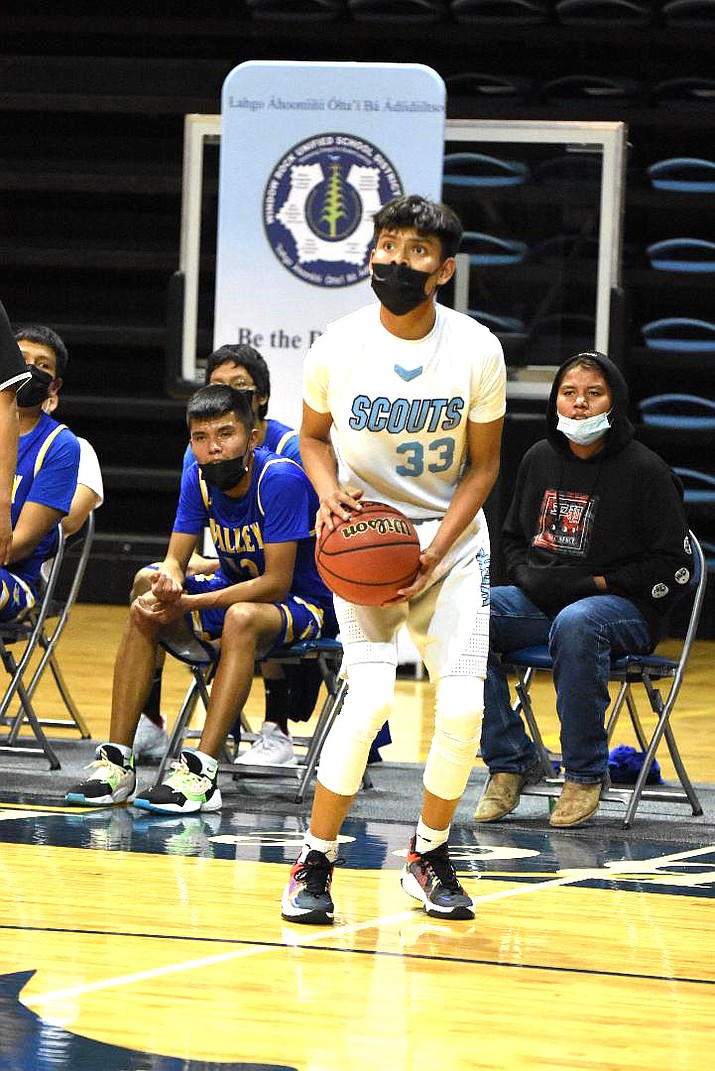 Isiah Begay pulls up for a baseline jumper against the Sanders High School Pirates. Scouts won the game led by Begay with 27 points. (Photos/Bernie Dotson)

After the game, It was confirmed that the Lady Scouts (3-5, 0-1) forfeited two games played so far this season. The games were against Miyamura and Saint Michaels— games that went into the books as big wins for Window Rock. The other game was not identified by Window Rock head coach Gabrielle Whitney or athletic director Ryan Dodson.

Neither Dodson nor Whitney went into detail about the forfeitures, but Dodson said at issue was an ineligible player. He did not not name the player.

The game against Sanders (4-5, 1-0) was the slowest in terms of pace that the Lady Scouts have played thus far this basketball season. Not even senior guard superstar Robey Talkalai, who averages close to 22 points per game, seemed into it, scoring just four points the entire game, which came in the fourth quarter and with about five minutes remaining in regulation.

On the other hand, Sanders senior guard Erin Mitchell went off for 24 points and proved unstoppable against a myriad of Window Rock defenses. With the versatile Mitchell leading the way, the Lady Pirates made several runs toward the end of the third quarter, and really turned up the heat at the beginning of the fourth quarter, but someone on Window Rock’s team just seemed to come along and pull the Lady Scouts out of their funk.

The score was 48-42 with 44.7 seconds left on the game clock in the fourth quarter. But the Lady Scouts were unshakable.

“We played good defense and that allowed us to break even at several intervals,” Sanders head coach Dorothy Mitchell said. “I think on defense had we made some more stops throughout the early points of the game, you would probably have seen a different final score.”

Sanders sophomore guard Megan Nez put up timely jump shots to free up the moving Mitchell. On one play, Nez penetrated from the top of the key to the left side and found a cutting Mitchell inside for two points. And on anther play, Nez dribbled past two Window Rock defenders and put up an off balance bank shot for a score.

Talkalai is one of the best players in Arizona and so is senior Lady Scouts shooting guard Mikaela Roanhorse. Whitney said after the game she intentionally did not play Talkalai for long stretches, because she wanted her to get some rest.

Roanhorse played most of the game and is a deadly shooter from anywhere. Roan horse scored 8 points in the game. Senior forward Desiree Nelson put up 16 points. Nez finished with 8 points and was a spark plug for Valley on offense and defense. 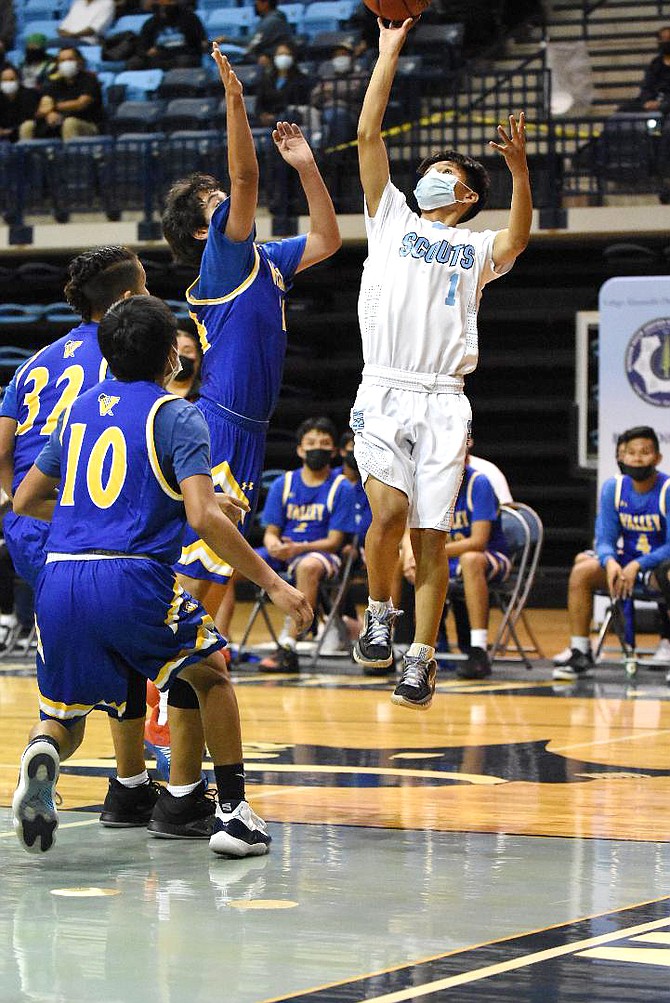 The Window Rock Scouts went on a 16-5 run with less than four minutes to go in regulation and held back a scrappy Valley Sanders team 69-52 in a boys basketball game.

Senior forward Isaiah Begay led the way for Window Rock with 27 points and senior point guard Quarzan Martinez scored 10 points and ably controlled the pace of the game, particularly in the waning minutes when Sanders made huge runs.

The game was competitive from a defensive standpoint from the start with both teams exchanging leads five times in the first quarter. The score was 13-8 at the end of the first, but things looked pretty much equal for both teams. Seniors forwards Isaiah Begay and Darshane Yazzie were key with respect to grabbing reboots and putting shots back for points for the Scouts. Begay scored on a put back to put the Scouts ahead 17-10 toward the middle of the second quarter.

But the Scouts had a bit of a problem containing junior guard Makai Yazzie of the Pirates. Yazzie got the score to 28-18 with less than a minute to go in the second quarter, and led several Valley Sanders runs with points and assists. But the Pirates’ defense still had Begay and senior center Kyle Weaver to deal with inside. Weaver played a lot more minutes than usual, due to the fact that Darshane Yazzie left the game in the second quarter with an injury.

Weaver, one of the tallest players on the court at 6-foot-3 inches — filled in and took up the rebounding slack from Yazzie and contributed points off rebounds. The give and go plays that work so well with Begay and Yazzie, also worked to practical perfection when Weaver was in the game and down low with Begay.

Things were going pretty well for Window Rock as the third quarter came about, up 46-35 with 2:16 to go in the third. Weaver seemed to have little fear, taking three jump shots during the third quarter scoring span, hitting a 3-pointer from the right side of the key at one point.

With Yazzie out, Begay became the leader down low for the Scouts. Martinez superbly ran the offense from the point guard position.

Martinez scored two buckets at the beginning of the fourth quarter and Begay and Weaver went off — Begay with points and Weaver teasing and scoring with long jumpers.