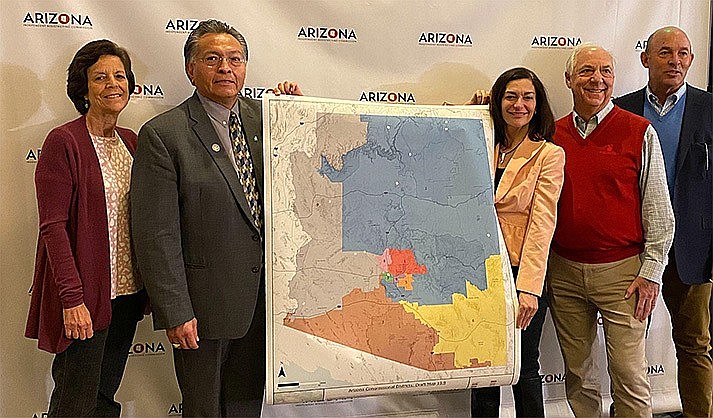 The new boundaries create four solidly Republican districts, two where Democrats are likely to dominate and three that could be relatively competitive, based on metrics the commission uses to measure competitiveness. Of the potentially competitive districts, one strongly favors Democrats and two lean toward Republicans based on their voting patterns in nine past elections.

Arizona’s congressional delegation currently has five Democrats and four Republicans. The likelihood that Democrats will lose ground in Arizona further complicates the party’s bleak prospects in next year’s midterm elections, when control of the U.S. House will be at stake.

“This is not the map that I would’ve liked,” Democratic Commissioner Shereen Lerner said, saying the two competitive districts could’ve been more balanced. But she said the final boundaries had improved from earlier drafts and expressed hope that the picture will improve over the next decade the maps are in effect.

Republican Commissioner Doug York said an earlier draft was better for the GOP, and he credited the commission with approving a map that wasn’t favored by either side.

Lerner tried in vain to tweak one competitive district in the North Valley to reduce its Republican leaning before the final vote.

On the new congressional map, districts currently represented by Democrats Tom O’Halleran and Ann Kirkpatrick — the two most competitive in the state under the existing boundaries — moved in favor of Republicans. The new boundaries for O’Halleran’s rural district tilt it strongly toward Republicans, casting serious doubt on his prospects for reelection.

Kirkpatrick has already announced plans to retire. The new district boundaries for the region she represents include eastern Tucson, Casa Grande and most of southeastern Arizona.

Much of the area now represented by Republican David Schweikert is likely to become the most competitive district in the state. The new boundaries include Scottsdale, Paradise Valley, parts of North Phoenix, the Salt River Pima-Maricopa Indian Community and the Fort McDowell Yavapai Nation.

The regions now represented by Schweikert and Kirkpatrick will be the state’s two battleground districts. An East Valley District including Tempe, Mesa, Ahwatukee and part of Chandler is considered marginally competitive under the commission’s metrics, though voters there have elected Democrats in eight of nine races analyzed by the commission.

The redistricting panel is made up of two Republicans, two Democrats and independent Chair Erika Neuberg, who mainly backed Republican-favored versions of the maps through much of the recent deliberations. Redistricting is required every 10 years under the U.S. Constitution to adjust for population changes around the country.

“The Chair has a duty to ensure a fair process and not side with Republicans or push a partisan agenda,” Holder, who is leading Democratic efforts to influence redistricting around the country, wrote on Twitter. “Anything less than maps that are fair will be challenged.”

Maps drawn by the Arizona redistricting commissions based on the 2000 and 2010 censuses both were challenged in court.

The voter-created redistricting law, which removed the job from the Legislature and was supposed to limit partisanship, says commissioners should draw districts that are compact and contiguous, comply with the U.S. Constitution and the Voting Rights Act and respect communities of interest and city, county or geographic lines or features.

The commission adopted draft maps in late October and then held a monthlong series of meetings across the state before starting its final set of meetings last week.

Republicans generally liked the district maps drawn after the 2000 census, and those done following the 2010 census were regarded as more favorable to Democrats, prompting strong criticism from Republicans.