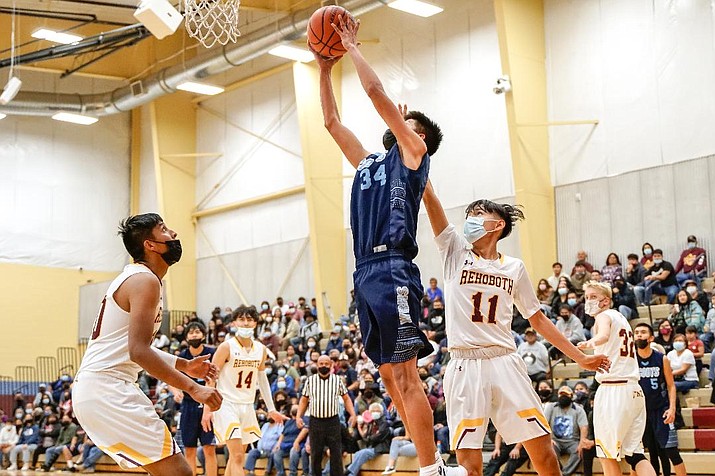 Forward Darshane Yazzie is a leading rebounder for Window Rock through the games played so far this season. Yazzie plays mostly inside, but is a deadly shooter as well. (Photo/Michelle Silver-Bighorse)

The win was the first for the Scouts after a 54-35 loss at Blue Ridge (Lakeside) Dec. 7. The Scouts remain a top team in 3A North. The loss ended Rehoboth’s perfect early season start.

“We stepped up our defense toward the beginning of the third quarter,” Window Rock head coach Murray Shirley explained. “That’s what won it for us. We hung tough all game, but it was defense that won this.”

Rehoboth got on the scoreboard first with two long shots from sophomore guard Raeden West. Senior guard Mato Chapman was a thorn in the side of the Scouts, hunting and diving for loose balls and putting up shots at random. When West ventured in the paint, he was a problem for Window Rock’s big men. 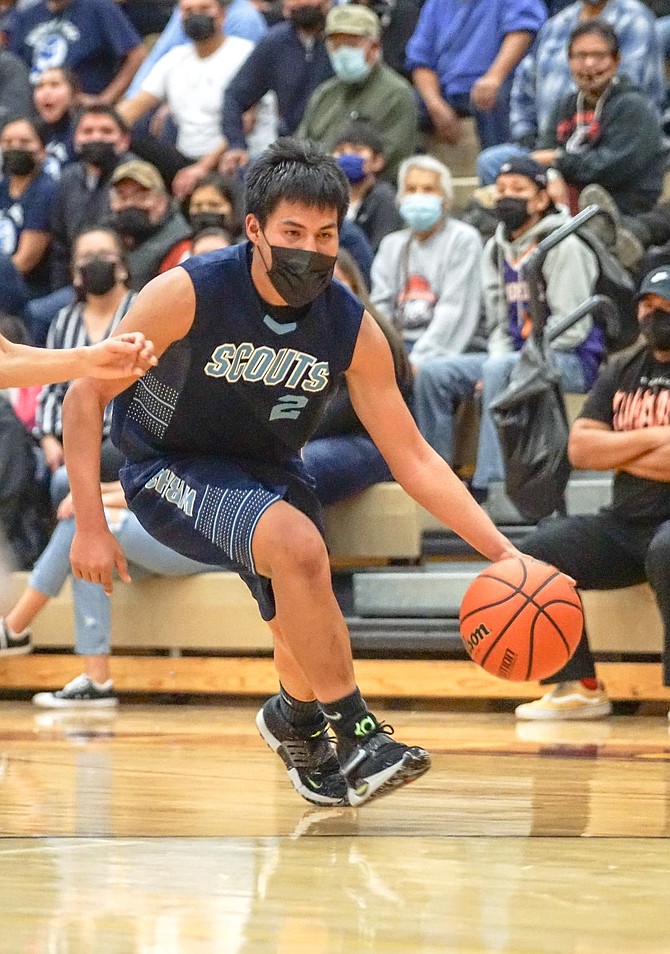 Window Rock guard Quarzan Martinez drives against the Rehoboth Lynx in a recent basketball game. Martinez was one of two leading scorers in the game, which the Scouts won, 42-41. (Photo/Michelle Silver-Bighorse)

At one point at the beginning of the second quarter, Chapman grabbed two consecutive offensive rebounds for put back scores. Chapman’s jump shots spread the floor for players like senior forward Isaac Zwiers to rebound and roam.

Window Rock (4-1) had some trouble finding itself on offense, especially inside, as the Lynx matched the height of the Scouts’ Isaiah Begay and Darshane Yazzie. That was particularly evident with respect to rebounding — Begay is normally a leading rebounder for the Scouts. But for one of the few times this short season, both were neutralized.

Rehoboth (5-1) took an 8-2 lead in the first quarter and the Window Rock faithful who traveled from the reservation looked worried. Pesky guard Quarzan Martinez kept the Scouts close with an assortment of jump shots and drives to the basket. With the game relatively slow in the second quarter, and the score at 12-8 at the end of the first, both teams looked like they wanted to take a different approach in the second quarter.

Senior Marcus Nelson of the Scouts put up jump shots that went in, and Begay and Yazzie connected on give-and-go’s from inside and Window Rock was heating up. But the Lynx toughened their defense and with the score 20-17 in favor of Rehoboth, it looked like it was anyone’s game to win.

“We just didn’t hit shots when we needed to,” Rehoboth head coach Kevin Zwiers said, saying the shots by Nelson were a difference maker. “We missed a couple of rebounds in the third and fourth quarters and the ball just didn’t bounce our way when we needed it to.”

Yazzie opened the third quarter with a 3-pointer which seemed to take the life out of the Rehoboth defense. But Chapman and Zwiers were relentless inside and helped put the Lynx up 30-22 with 3:15 on the game clock in the third quarter.

Window Rock got back in it on shots — including a right side scoop shot drive — by Martinez. A timeout in the late third allowed “…for us to get some control and pay more attention to the clock,” Shirley said. The Scouts committed eight turnovers which worked against what Window Rock wanted to do on offense, Shirley said. “We have to lower the turnovers,” he said after the game.

Talon West hit a long 3-pointer toward the end of the third and things looked tight for Window Rock. Martinez answered with a 3-pointer of his own and a 35-34 Window Rock lead. The Scouts led just three times the entire game.

The score was tied 40-40 with 2:06 to go in the fourth quarter when Shirley called the final timeout. Martinez got to the foul line on a drive and Yazzie kept balls alive with rebounds. Senior guard Owen Mitchell put Window Rock up 42-40 with seconds left on the game clock. Zwiers was fouled on Rehoboth’s final possession, and hit one of the subsequent free throws.

Martinez finished with 15 points and Nelson ended with 12. Chapman scored 12 points for Rehobth and West hit 10 for the Lynx.