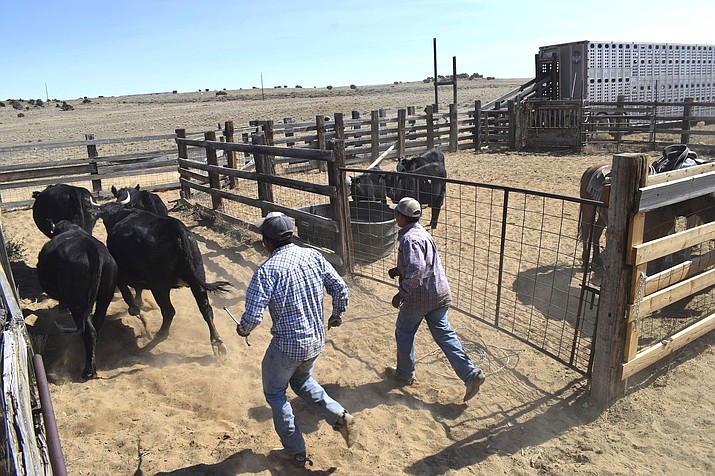 Ranchers count cattle in October 2020 in a corral at the Sims Ranch near Crownpoint, New Mexico. Legislation sponsored by a member of the Navajo Nation Council would support a congressional effort aimed at ensuring beef imported to the U.S. is properly labeled. (Vida Volkert/Gallup Independent via AP)

CROWNPOINT, N.M. (AP) — Continued drought and lack of precipitation in the Southwest has forced rancher Majorie Lantana to reduce the number of cows at the ranch she leases from the Navajo Nation.

The ranch, registered as the Pitts Ranch 4, is located about 15 miles from Crownpoint. Lantana said the ranch allows for 64 head of cattle but she has had to reduce that number several times because there's limited grass on the range.

"There has been very scattered rainfall in the past six months," Lantana said during a recent phone interview with the Gallup Independent. "Right now I can only run 29 heads, and I supplement."

Drought not the only concern

Lantana said she is a member of the New Mexico Beef Council and the New Mexico Cattle Growers Association. It is through these circles that she learned that beef from other countries is entering the United States and getting repackaged and labeled as a USA product.

This, she said, is adding more challenges to a market already impacted by drought and pandemic lockdowns and regulations. It is adding more stress to ranchers and beef producers as they have to compete with cheaper products.

"New Mexico ranchers are very opposed to this," she said. "We are in support of raising cattle for profit."

Yazzie said he had already heard from other ranchers about the imported beef issue and was informed that New Mexico Sen. Ben Ray Lujan had joined other members of Congress to cosponsor the America Beef Labeling Act of 2021.

Lujan, a member of the Senate Agriculture Committee, has said the pandemic "proved how important it is to have a strong, reliable, local food supply, and consumers deserve to know where their food comes from."

In short, the legislation seeks to reinstate the mandatory country of origin labeling requirements for beef. The proposed Senate bill states that the current beef labeling system in the United States allows imported beef that is neither born nor raised in the United States, but simply finished in the U.S., to be labeled as a product of the USA.

Yazzie said this process is unfair to cattle producers and misleading for consumers and decided to sponsor his own legislation on the Navajo Nation Council to support the Senate bill.

According to Yazzie's legislation, "the U.S. Department of Agriculture estimated in 2012 that 18 percent of the available beef in the U.S. market is sourced either as an imported beef product or from imported cattle converted to beef in a U.S. packing plant." Yazzie's legislation states beef is entering from more than 20 countries.

Yazzie said he is not opposed to these imports, he just wants to make sure they are properly labeled and represented in the U.S. market in order for consumers to make an educated decision about what they want to put on their table.