Guest Column: Changing times for Snowbowl and a history of the ski resort 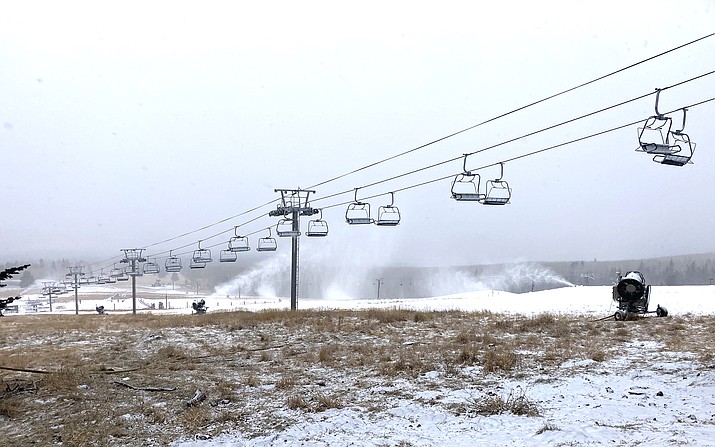 A recent snowstorm Dec. 7 had little effect on Snowbowl's slopes as the resort continued operations with artificial snow made from treated wastewater. (Katherine Locke/NHO)

Arizona Snowbowl Resort is a private business owned by Mountain Capital Partners, operating on 777 acres of public land leased from the U.S. Forest Service (USFS), which holds their operating permit. The Forest Service is required by law to look after the lands it administers for the health and benefit of the land herself as well as for future generations of us five-fingered people.

Until recently their commercial tenant, Snowbowl, has been pleased with the arrangement; the rest of us, not so much. But there are signs of big changes ahead.

First, some history. How did the Peaks become “public land” in the first place? Simple. The area was claimed and set aside by the U.S. federal government in 1898 from what Arizona Territory decided was public domain. Native Nations were not consulted. Yet in 1898 and still today, the entire Peaks area was and is traditional unceded sacred territory of fourteen Native Nations.

Their responsibility to care for these environments and the sacred beings who dwell there since time immemorial has been recognized not only by the United Nations Special Rapporteur on the rights of Indigenous people, but it is also recognized to some extent under U.S. federal law, including the National Historic Preservation Act (NHPA).

A year ago, Arizona Snowbowl Resort announced its new Master Development Plan (MDP). Presentations were made to business leaders, outdoor recreation groups, and a handful of Native Nation representatives, but a broad public relations campaign has yet to appear. The plan envisions Snowbowl expanding lift capacity, parking, and overall carrying capacity during the winter, but also becoming a full four-season resort, with greatly expanded mountain bike trails, zip lines, summer tubing, a climbing wall, a “Fun Zone” and facilities for concerts and weddings.

Perhaps Snowbowl owners assumed that this MDP would sail through like the last one — you know, the one that established snowmaking with treated waste water bought from the city of Flagstaff? There was opposition; there were protests and lawsuits, but in the end, Snowbowl got everything they wanted. Who knew that U.S. law skews in favor of business interests on “public lands?”

But things are different in 2021. Three things have changed:

Snowbowl opened last week on 100 percent artificial snow made from treated wastewater — a situation likely to become the rule rather than the exception according to climate trends. Is this healthy? Is it even legal? As for the new MDP, many will immediately observe that a large new expansion of Snowbowl’s footprint in a location without a source of potable water is not sustainable, period.

Let Mountain Capital Partners buy some land and build their four seasons resort somewhere else, somewhere that does not rub salt in a wound Native people have borne for more than 80 years; a wound that prevents all of us, Native, immigrant, slave-descended and settler-descended alike, from living in peace at the foot of these sacred, revered and beloved beings.