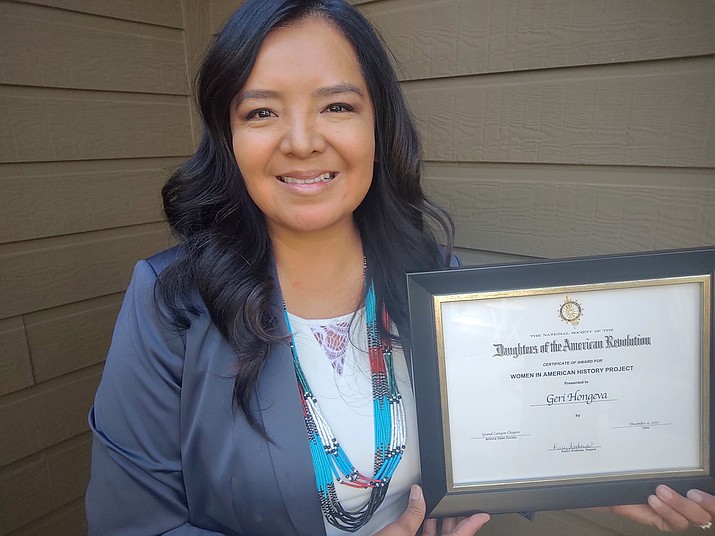 Geri Hongeva was awarded the Daughters of the American Revolution (DAR) Women in American History Award in Scottsdale for the Grand Canyon Chapter Dec. 4 for her contributions to the cultural heritage of the Navajo Nation and the promotion of tourism in the state.

Amy Casaldi, American History Committee chair for the Daughters of the American Revolution Grand Canyon Chapter in Scottsdale, said the award’s emphasis is given to a woman, past or present, who have made a contribution or a difference in their communities.

“Women who are, or have been, intellectual, educational, social, religious, political, scientific or cultural innovators,” Casaldi said.

Casaldi said one reason she was nominated was because of her direct involvement in her community.

“She won the Arizona State Society Daughters of the American Revolution community service award specifically for her work with the Navajo Hopi Honor Riders,” Casaldi said.

But, as Casaldi looked more into Hongeva’s background, she found more reasons for the organization should give her the award.

“I have to say, after hearing her speech, so many ladies in the organization came up after and they felt so inspired by what she said,” Casaldi said.

Hongeva said her great grandmother raised her and was a mentor, whether it was planting corn, herding sheep, carting wool, grinding corn or butchering.

“Every little thing that’s part of Navajo life, she was my teacher, she was my inspiration,” she said. “At a very, very early age, I learned to work. That’s a big part of my life. I will always be grateful to her for that because she didn’t want us to be lazy. She is the person who made me who I am.”

Hongeva said to this day, when she is struggling with a decision or at a crossroads, she remembers her grandmother.

Navajo is Hongeva’s first language was Navajo — she didn’t enter the public school system until third grade. She said her parents, but especially her father, was adamant about her knowing her language.

“[He thought] that was the most important thing to utilize throughout life,” she said. “But I grew up in Flagstaff. In the public schools no one else was speaking Navajo, even other Navajos didn’t know how to speak Navajo.”

Hongeva said she questioned throughout her childhood whether she would ever really use or need to know Navajo and if only she, her parents and two brothers were the only ones to speak the language. But she found out he was right at her first job, where the majority of the customers were Navajo.

“At my first job at Lady Foot Locker in the Flagstaff Mall at the age of 15, they hired me because I was great at speaking Navajo,” she said. “They had all the Navajo parents coming into town to buy cross country shoes, or basketball shoes. They came with their grandparents speaking Navajo and I was able to talk to them about the shoes in Navajo and about the money. I quickly became one of the best salespeople because I had two languages.”

In 2001, Hongeva received her bachelor of fine arts degree in visual communication from the School of Communication at Northern Arizona University. She began working as an intern at NAU, and when she graduated, she was hired as a full time media specialist for TechShare Project, which helps teachers with Navajo language preservation in elementary schools

She was also a creative director for anthropology, assisting in protecting sacred sites on the Colorado Plateau. Hongeva worked for NAU for more than eight years and is knowledgeable about Native American cultural preservation.

Hongeva has worked for Navajo Parks & Recreation, Navajo Nation Fair and the Navajo Division of Natural Resources for eight years as the media representative, where she heavily promoted travel and tourism on the Navajo Nation. She served a vital role in initiating and coordinating the Monument Valley Balloon Event consecutively for four years.

In her work now at Twin Arrows Travel Center, her influences can be seen in signs leading into the restrooms and the non-smoking signs that are in Navajo.

“I’ve done the translation for that,” she said. “It’s the small way that I’m still helping with the language, even though it’s a casino. I’m always proud of it.”

Hongeva’s father wanted her to use her language to help people, and said that when he was in Vietnam, he and other Navajos would speak to each other in the language.

“There was only a couple of them, but he said, ‘That is the only thing that saved my life,’” Hongeva said. “‘And I want it to come home. The language kept us going just to hear it, every day with these guys. And we’d laugh and joke and we knew we could talk to the rest of our family later on when we’re done with the war.’ He said the language really kept him sane, the company of the language, and how close home is, even though they they’re in a totally different place in such an ugly space during war time.”

Hongeva said the Daughters of the American Revolution works with military families, as she does as part of the Navajo Hopi Honor Riders. While she didn’t serve herself, her husband was in the Navy for 12 years. Her father served in Vietnam.

“I just wanted to thank [DAR] for being in the same room with me that day (when she received her award),” she said. “They could be anywhere else…but this is where they choose to be. And they choose to be there doing what they’re doing and it takes a lot of work, just as much as what we do as Navajo Hopi Honor Riders.”

Hongeva said her support system helps her continue her work.

“The support system is very important,” she said. “That’s what makes people keep doing what they’re doing. If none of us were getting help and we were merely alone, it would be so stressful. It would be so hard and difficult.”

She said her kids were her coaches as she played C3PO in Navajo Star Wars. They encouraged her and helped her read Navajo - she is a fluent speaker, but doesn’t read it. Her son coached her on how to play the character.

Her husband makes sure her bike is fueled up and ready to go.

“I’ve been so lucky that people around me have had the same passion I do or that they encourage me,” she said.

More information about the chapter is at http://grandcanyon.arizonadar.org/ and on Facebook at https://m.facebook.com/GrandCanyonDAR.