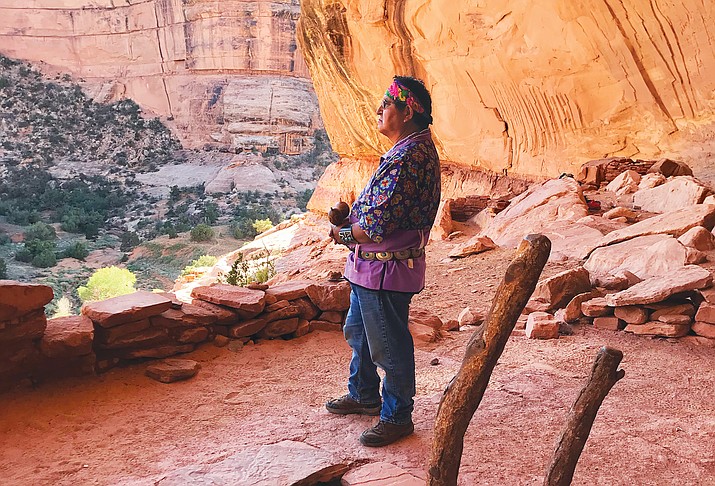 Former Hopi Vice Chairman Clark Tenakhongva has played a role in protecting environmental and cultural areas. Even though he no longer holds office, he still has concerns about the environment and the tribe’s economic situation.

Tenakhongva’s last day as vice chairman was Dec 1. He was replaced by Craig Andrews in the Nov. 11 general election.

Tenakhongva, who served on the Hopi Tribe’s budget oversight task team, said he helped get the budget back in line. However, he said one problem is the tribe has only about $2 million coming in from the properties it owns and has lost the $20-$30 million per year that it used to get from Peabody Coal Co. before the Navajo Generating Station closed down.

“We need more sources of funding,” he said. “The Hopi Tribal Council was short-sighted because they never took seriously that the mine was going to shut down.”

Tenakhongva said the $2 million coming in from properties is less than five percent of the previous years’ income that included funding from Peabody.

“The tribe could go bankrupt in five years,” he said.

Drought is a major issue on Hopi

Tenakhongva said the drought, which has lasted for at least 10 years on Hopi, has caused ranchers to reduce their cattle. He said the administration wanted to reduce cattle by 100 percent in some areas, but that was overturned by the Hopi Tribal Council.

Tenakhongva said because of drought, the land and water team wants more well sites, not just for livestock, but for agriculture and other needs.

On the national level, Tenakhongva had input in protecting Bears Ears, Chaco Canyon and banning uranium mining from the Grand Canyon.

Tenakhongva supported the recently reinstated 10- mile buffer zone near Chaco Canyon, which keeps the area from being drilled for oil and gas.

Tenakhongva was also involved with halting the proposed Rosemont Mine by Tucson.

He also helped stop the construction of the border wall along the Tohono O’Odham and Pasqua Yaqui tribes’ borders. The lack of a wall means the tribes can move about their homeland in the U.S. as well as Mexico, while protecting the environment.

His intent on all these issues was to protect the environment and Hopi cultural sites, which he said includes areas in Arizona, New Mexico, northern Mexico, Bears Ears and the Grand Canyon.

Cleaning up begins at home

Tenakhongva said cleaning up trash in the communities needs to begin with the community members.

“People need to be engaged in how we work as a community instead of putting it on the tribe or the community service administrators,” he said.

Tenakhongva said the trash is an eye sore and needs to be addressed because the Hopi people call themselves stewards of the land.

Tenakhongva said the proposed new jail on Hopi appears to be on hold.

“It started going forward, but then it became a political hot potato,” he said. “Nothing has happened for years.”

Tenkahongva is concerned about the low voter turnout in the chairman and vice chairman election held Nov. 11.

Tenakhongva said when less than one fourth of the registered voters turn out it raises the question of whether voters have lost faith in their leadership.

Tenakhongva said Hopi needs to take the advice of CDC on practices regarding COVID-19.

He said while Hopi has done a good job with vaccinations they need to make sure they are not gathering in large crowds. Tenakhongva is concerned that people can come and go from the reservation, just like any city, without restrictions.

Tenakhongva said vaccinations and social distancing can save people’s lives.

Tenakhongva restricts his movements because of COVID-19, but he knows that people have cabin fever after almost two years of dealing with the pandemic.

He said the Hopi Tribal Council needs to focus on land, water and revenue issues while remembering they work for the people and that it is not a self-employment agency.

Food donations to the elderly

He said some of the money from the federal Cares Act should have gone to the villages.

Broadband needed for remote school and work for Hopi people

Tenakhongva said he has always supported education. His main concern regarding Hopi education is that a lot have gone to remote learning and Hopi’s broadband is not good so many people cannot get on the internet.

Hopi’s main provider is Hopi Telecommunications. Tenakhongva said Hopi would be better off going with a larger company such as T Mobile or A, T & T in order to meet the needs of the 9,000 who live on Hopi. He said many need access to the internet for their work.

“These are the things I’ve done my entire life,” he said.

Tenakhongva, who served in the Army, retired after working for the Veterans Administration for 28 years. He has also served on school boards and community organizations.