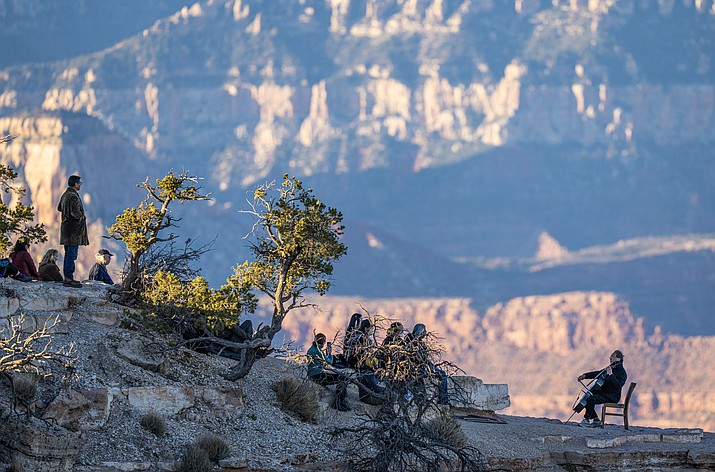 Yo-Yo Ma plays at the edge of the Grand Canyon where he also listened to Indigenous people about their ties to the Canyon. (Photo courtesy of Austin Mann)

FLAGSTAFF, Ariz. — The world’s most famous cellist, Yo-Yo Ma, visited the Grand Canyon in November not to play, but to listen. He listened to the Canyon itself and the perspectives of the Indigenous people connected to the Canyon for generations.

“I really liked the purpose and the focus of his visit,” said Ed Kabotie, a Hopi-Tewa musician who met with Ma. “It’s important to recognize that there are many intimate perspectives in this discussion, the perspective of the Hualapai, the Havasupai, the Navajo, the Hopi, the Zuni. It was a good group of voices, to interact with him.

Yo-Yo Ma visited the sacred American landscape to explore how its lessons about time, nature, and how the relationship to both can help shape a better future together.

It was his second stop in a project to explore how culture can help us strengthen relationships to nature and to each other. In July, Ma went to Maine to meet with the Wabanaki peoples. As the people of the dawnland, they consider it their responsibility to welcome the sun for the rest of the continent.

“Today, as we navigate a new relationship to each other and to the natural world emerging from a global pandemic, we turn to our indigenous neighbors to guide us and give us hope,” reads Yo-Yo Ma’s website about that visit.

A short film documenting the Maine experience is being co-produced by Nia Tero & Upstander Project. At the moment, nothing has been announced about outcomes from Mas Grand Canyon visit.

Watahomigie-Corliss was the first to welcome Ma. She took him to a location near Red Butte, where the road forks. One branch of the road leads to a traditional gathering place of the Havasupai. The other to a uranium mine that threatens the water source for the Havasupai. There she showed Ma how Havasupai introduce themselves to the land. 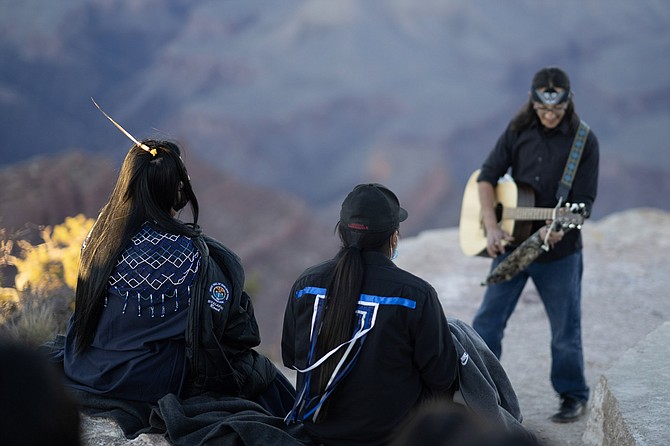 Ed Kabotie was one of the musicians selected to play at the edge of the canyon with Yo-Yo Ma. (Photo courtesy of Austin Mann)

“It involves the plants, it involves the earth, it involves talking to the land quite literally, I thought that would be a good start,” she said. “We are of this land and we have been taking care of it and it is our responsibility to continue to take care of the land and the water.”

Ma played a song for Watahomigie-Corliss’ baby on his cello.

The next day they walked together a short way into the Canyon, on a trail labeled by the National Park Service as Bright Angel Trail, but known to the Havasupai as Qatt Viì hēh ñ ñaa “Coyote Tail” Trail.

“All the trails down there were animal trails and then the animal trails were developed by the Havasupai, that turned into trails that they are using today,” Watahomigie-Corliss said. “He was interested in the true history of the area.”

That history includes the Supai inhabiting the Grand Canyon for thousands of years before being pushed out by the National Park. In recent years the National Park Service has been working more with the Native people and have agreed to change the names of some park locations, including Indian Gardens which will be called Havasupai Gardens in recognition of the families who lived there until forced to move.

“It happens to be the right time that people are willing to listen,” Watahomigie-Corliss said. “It’s been a very long time coming.”

Ma also joined three generations of Native composers: Raven Chacon, his former student Michael Begay, and student composers Christina Shupla and Arika Morningstar, of the Grand Canyon Music Festival’s Native American Composer Apprentice Project. Together, they explored what it means to listen to the world around you and respond with human expression. The students shared how they want to shape the next generation of culture on behalf of their land and their communities.

“That was tremendous,” said Steve Darden. “As an elder, it was good that I witnessed Yo-Yo Ma spend time with some young Hopi and Navajo, young adults who are wanting to pursue something in the vein of what Mr. Yo-Yo Ma does.”

The experience culminated in a sunset performance at Shoshone Point, where Ma and others shared music, poetry, and dance. Darden opened the gathering with a Diné blessing and song. Standing on the end of the point to give the blessing, Darden was enthralled by the expansive views of the Canyon to the east and to the west, and north looking past the small gathering of people to see the sacred San Francisco Peaks in the distance.

“We don’t want such a place stampeded by outsiders who just treat it like a tourist site or an amusement area,” Darden said.

“It was a very peaceful and very deep and multisensory experience, where you’re hearing people’s voices and instruments that don’t usually work together, people from different tribes,” said Kelley Hays-Gilpin, who represented the Museum of Northern Arizona at the gathering. “Just to have that all happening at once in this amazing setting, it was just not something that I would have expected or thought of, but it worked and you wished there could be more of that, just people coming together from different traditions and jamming.”

Ed Kabotie was one of the musicians. He played the first part of his original song Loloma (Beauty), solo to the Canyon and then Ma joined in for the second half of the song.

“That was pretty special,” Kabotie said. “The Canyon to us is a place of beginning, a place of endings. It’s a place of renewal, but it’s a place that we approach with a great deal of reverence and a degree of fear at the same time. It’s hard to communicate that, how your culture and your cosmology is wrapped around that place.”

Music can be a way to express what’s beyond words, but Kabotie feels some kinds of music aren’t appropriate at the rim of the Canyon. When he’s organized Rumble on the Rim to bring attention to the need to protect the Canyon and the Colorado River, Kabotie holds the event at Shrine of the Ages, not at the actual rim of the canyon.

The cello seemed fitting for the location, particularly with the strong personal expression Ma draws from the instrument.

“I was very moved by it,” Kabotie said. “It was very meditative and prayerful.”

Ma’s cello music carried a powerful message, but so too did his choice to collaborate and listen. Ophelia felt that showed he knows that the Canyon is a place of many people that needs representation of many people.

“That just filled my heart with hope,” said Hays-Gilpin “Indigenous knowledge of Grand Canyon is really important and something everyone should have the opportunity to hear. Those voices need to be heard and acted on.”