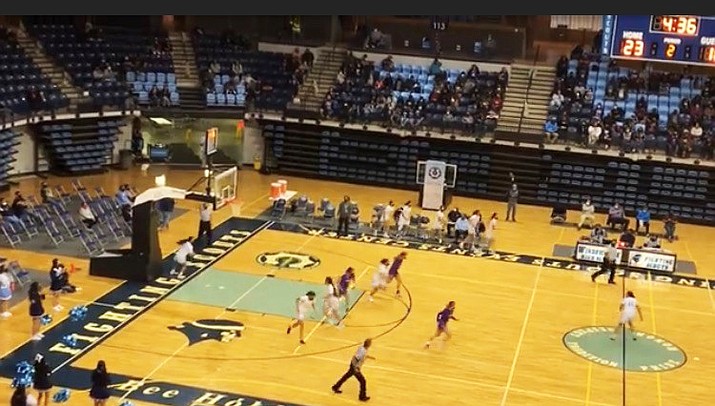 WINDOW Rock, Ariz. — The Miyamura Patriots threw everything they had at Window Rock in a Nov. 27 boys basketball intra-state game that went down to the wire on a 52-51 Miyamura loss. But it was the camaraderie of players and coaches knowing each other for years that helped Window Rock close the door on a stingy Patriot squad.

The game was the first of the season for each team and featured new Window Rock head coach Murray Shirley. There was one technical foul called on a Miyamura player in the fourth quarter which added to a momentum swing for the Scouts.

“We broke down defensively and at inopportune times,” Reyes Hernandez, Miyamura head coach, said. “We made some mistakes and got away from what we were doing early in the game which got us leads.”

The Patriots jumped out to an 11-8 lead in the opening quarter behind the court play of Antonio Landavazo. The tall and versatile Landavazo scored points inside and outside and the Scouts didn’t have an answer particularly for Landavazo’s inside screen and put back shots. But stretch forward Isaiah Begaye of Window Rock found his groove and got hot from mid-range and grabbed key rebounds which gave the Scouts a 16-12 lead with 3:23 left on the game clock in the first quarter.

Miyamura got scoring advantages in the first half behind the guard play of seniors Mathias Rodriguez and Gabe Valdez. Rodriguez hit some long jumpers — including two 3-pointers — in the first and second quarters that stung the Scouts. Valdez’ penetration was key to the Patriots taking early leads.

But the Scouts never counted themselves out, hanging tight and switching defenses to stop the inside pick and roll passes and getting out on shooters.

“We made some adjustments on defense,” Shirley said. “We knew we could not let them continue the inside scoring. We knew we had to start hitting shots ourselves. That’s where knowing each other for so long came into play.”

The tide turned when Begaye became more aggressive on the offensive and defensive ends. When Rodriguez was tagged with the technical, the Patriots seemed to ease up a little on both ends of the court. The Scouts didn’t hesitate to put up shots, or settling in to run plays when the Patriot defense allowed it.

During the waning minutes of the fourth quarter, both teams traded baskets, but the Patriots were hesitant due to the technical foul called earlier. On the other hand, the Scouts knew they had to get and keep a lead so they put up shots when they could.

Begay ended with 12 points and four steals. Darshane Yazzie finished with 13 rebounds, which Shirley said made a difference in the outcome of the game. Landavazo finished with 13 points for the Patriots.

Senior guards Robey Talkalai and Mikaela Roanhorse of the Lady Scouts were too much for Miyamura High Nov. 27 in a 59-51 intra-state season opening girls varsity basketball game win.

The game was part of a doubleheader with the boys’ teams for both schools and was the first of the 2021-22 season for both teams.

“This was a good win for us and showed that we are a very good defensive team,” Gabrielle Whitney, head coach of the Window Rock Lady Scouts, said. “We played team ball. I’m happy with the win.”

The game started kind of slow for the Lady Scouts who committed two turnovers in the first five minutes. But the slow pace of the game didn’t seem to bother senior do-everything point guard Kalisha Sacatero of Miyamura who was unstoppable for four quarters. Sacatero single-handedly kept the Lady Patriots in the game the entire contest with an assortment of drives and jump shots and was the catalyst who led the charge to nearly snatch the game from Window Rock in the fourth quarter.

Miyamura took an 8-6 lead within four minutes of the start of the game, but the Lady Patriots were hard-pressed to maintain leads with the unrelenting Talkalai terrorizing the Miyamura defense. Talkalai’s court intelligence and ball-handling skills enabled Window Rock to go ahead 14-10 with 2:20 to go in the first quarter. When Talkalai scored untouched on a runner from the right side of the paint, one sensed Miyamura had its hands full.

Roanhorse, who like Talkalai played on the 2021 Lady Scouts’ volleyball team, was the perfect off guard, positioning herself for assists from Talkalai at critical moments for the Lady Scouts. At certain points, Roanhorse appeared to have no respect for the Miyamura defense.

As the first quarter ended, Talkalai found Roanhorse on a long jumper from the left corner for a 16-10 Window Rock lead. And later in the second quarter, Roanhorse hit consecutive long jumpers from the same left corner spot that thwarted the momentum of Miyamura.

Sacatero wasn’t going away, though. She scored on back-to-back short jumpers and hit a underhanded scoop shot drive from the right side of the lane that left Window Rock guessing as to how to defend during the middle of the third quarter.

The Lady Scouts opened up on offense a little in the late third quarter, which enabled Talkalai to slash and dash at will. Similarly, the Lady Patriots opened the offense some, which allowed forwards Khaila Zunie and Tasheena Thompson to maneuver inside for shots and offensive rebounds. When Talkalia hit a 3-pointer to put Window Rock up 33-21 late in the third quarter, the game was getting out of reach for the Lady Patriots.

“Keep fighting. Keep fighting,” Miyamura head coach Tamira Shorty encouraged from the sideline. At some intervals, the Lady Patriots, led by Sacatero, looked like they were going to take leads. “Get back on defense.”

Talkalia finished with a game high 26 points and Roanhorse ended with 12 points — the majority of which came from the outside.

For the Lady Patriots, Sacatero scored a hard earned 24 points, and was the sole bright spot for Miyamura in stretches in the late quarters. Sacatero led the Lady Patriots to a 50-45 deficit in the fourth quarter, diving and hitting everything short and long in sight.

Forward Shiryl Yazzie scored 8 points and provided some heady senior leadership that enabled the Lady Scouts to keep late leads and protect against the Miyamura defense.