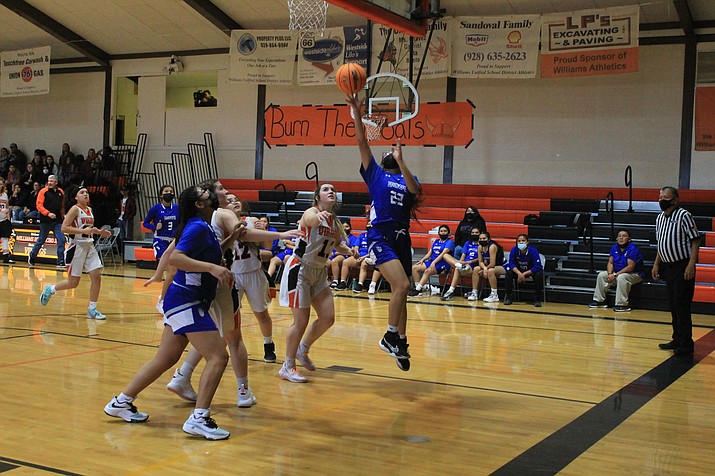 POLACCA, Ariz. — Hopi High School sports has returned this year after athletics were canceled last year because of the COVID-19 pandemic.

Some games this school year have been canceled or rescheduled because of COVID-19 and players are still feeling the impact of not having sports in 2020.

But student athletes, coaches and the community said they are excited for the return of sports.

Hopi High Athletic Director Ricky Greer said he is anxious every week because he doesn't know what games will be cancelled or rescheduled because of COVID.

Greer said COVID impacted games come in waves. He said in October there were quite a few cases impacting the high school football and volleyball teams. However, he said cases were down in November.

There were a couple cases recently at opponents’ schools, which caused Hopi High School teams to not attend some wrestling matches or volleyball games.

Greer said constantly being on alert to cancel or postpone games makes them hold their breath.

“It makes it hard to plan and we have to be flexible. We appreciate that the fans and community members are also being flexible,” he said. “Everyone has to be willing to adjust.”

Hopi was unable to attend wrestling meets in Winslow and Holbrook because of COVID issues with other teams. He said when contact tracing comes into the mix, the schools have to wait two to four days to get the test results.

Both the Hopi boys and girls cross country teams placed seventh at state this year — their lowest placement in years. Greer attributed that somewhat to not running last year because of the pandemic. He said the boys also had issues with discipline and injuries. He said the challenge for both teams was to get back into shape after they missed running last year.

Greer said the Hopi High boys and girls ran well at regionals in order to qualify for the state meet.

“The coaches did a great job,” he said.

Greer said a lot of the other cross country teams still ran last year because their areas did not have high incidences of COVID.

“We didn’t run as well as we could have,” he said about the state meet.

Greer said the cross country runners had to be phased in slowly after not running last year.

“But at some point you have to turn them loose. It was a difficult transition,” he said.

Greer said the Hopi High teams should be strong next year. He said the girls are on the upswing and the underclassmen on the boys team need to step up next year.

Greer said the outlook for how many games will be canceled the rest of the year is an unknown.

“We will have to wait and see. We track the figures every day. We are concerned that there are 6,000 cases statewide,” he said. “We don’t know what the holidays will bring. Everything is up in the air. It depends how much we mitigate. It is a team effort.”

This team effort that Greer refers to is about the players, coaches and community pitching in to mitigate.

“It’s been a long grind for almost three years and it won’t end anytime soon. So, it takes everyone to work together.”

Greer said Hopi High is not the only school that had to deal with COVID issues. Greyhills, in Tuba City, had no fall sports and hopes to have sports return in January. Many Farms had only cross country in the fall. Rock Point had to cancel several sports.

Greer said it has been fortunate that the athletic directors in northern Arizona have worked together to keep as many events going as possible.

Aside from sports, Hopi High has canceled four days of school this year due to COVID-19, but none in the past month.

“Every week is wait and see,” he said. “We have two weeks to go until the break so we hope to make it through without interruptions.”

Greer said dealing with canceling or postponing games because of COVID is more time consuming than frustrating. However, he said it’s great when the student athletes can play their games.

Safety protocols remain in place including wearing masks during inside games and social distancing for fans, which means less fans can attend.

“Mitigation plans are not perfect. There is no perfect situation when there’s a pandemic,” he said. “There have been a lot of conversations and feedback with the community. We appreciate everybody’s understanding and flexibility. It is great to see the student athletes back out there.”

Greer said he thanks everybody in the community who supports the athletes and are doing what they can to keep the virus down.