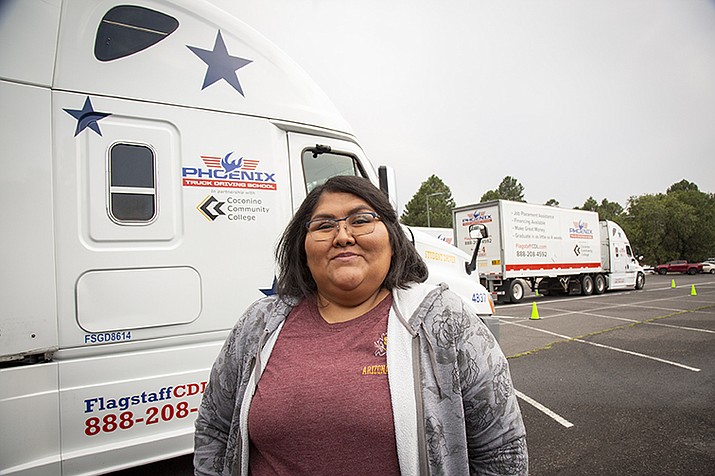 Flagstaff resident Lisa Black is a single mother of two children and she needed a job — a good job.

So, when she heard about a new program training people to get a commercial driver’s licenses (CDL), she was interested. Four weeks later, she passed all her tests, and is submitting applications to be a commercial driver. Prospects are better than good.

“It means a lot,” Black said of her new Class A CDL, which also has an endorsement to carry hazardous materials. “Financial stability for my family and me — that’s the main thing.”

With the help of the ARIZONA@WORK program and supported by funds from the Workforce Innovation Opportunities Act, Black enrolled in the new course, which is a partnership between Coconino Community College (CCC) and the Phoenix Truck Driving School. ARIZONA@WORK is a statewide program to help people get the skills they need for good jobs. Since Black is low-income, she qualified to have the cost of the program covered.

She was relieved when she discovered that a new program in Flagstaff had started in June at the CCC Fourth Street Campus. She wouldn’t need to try to find lodging in Phoenix and wouldn’t need to make arrangements for her children while she did the training.

“It was perfect timing,” Black said, smiling. “I was trying to figure out how to do this program if I had to go down to Phoenix, but with training up here now, I could stay at home.”

Black has previous experience as a driver and had worked toward a Class C CDL on her own. When she looked into how much more a Class A CDL driver could make, she was excited by the prospect. Class A CDL drivers are qualified to drive semi, 18-wheeler and tractor-trailer setups.

“I had the urge to keep pushing myself,” Black said, adding that the cost of living in Flagstaff is high, so she figured driving a big rig would go a long way to helping make ends meet. “It kind of all worked together. I was excited.”

The first week was all classroom. She went through 36 sections of material to learn about the vehicles, bumper to bumper and traffic laws. At the end of the week, she was tested on what she had learned.

The second week was devoted to inspecting the entire setup: the cab, the engine, exterior, brakes, suspension, tires and more. She also underwent a drug screening before she could move on to the next week. The third week she learned about yard skills. She had to learn how to double clutch, shift, downshift, hook up and uncouple the trailer, learn how to straight and offset back as well as parallel park.

“It’s intimidating, but it’s also fun,” Black said. “Once you get the hang of it, it’s simple.”

The fourth week was devoted to driving on roads and highways. After she completed the fourth week, she was ready to head to the Motor Vehicle Division for her tests. She passed her pre-trip inspection, her yard tests and her road test.

“I felt relieved when she told me I passed,” Black said.

Now, with the help of the Phoenix Truck Driving School, she is putting in applications with companies. In the meantime, she will work on getting endorsements to haul tankers and to qualify for double and triple trailers. Her dream job is to drive a fuel truck, delivering fuel to gas stations relatively close to home.

Black is the second graduate of the start-up program, but as she finished her training, more and more students began showing up.

“It’s definitely growing,” she said. “Right now, is the time to get a CDL. Right now, there’s a shortage of drivers.”

More information about the Phoenix Truck Driving School at CCC is available at www.flagstaffcdl.com.