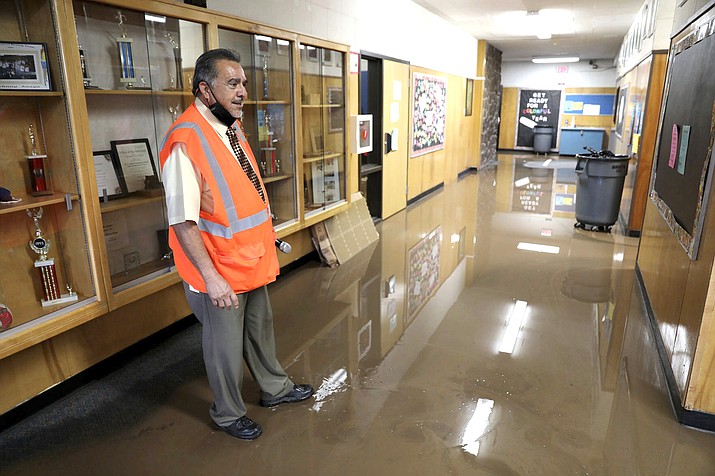 FLAGSTAFF, Ariz. (AP) — Workers and residents in Flagstaff were assessing damage, clearing away debris and cleaning up Wednesday from a flood caused by historic levels of rain that fell on a burn scar from a large wildfire two years ago.

The storm on Aug. 17 caused damage to at least 24 homes in the northern Arizona city, officials said.

Water and mud made their way into classrooms and hallways at Killip Elementary School. Classes were called off on Wednesday, with plans to move children into remote learning next week, the school said in a statement.

No injuries were reported. 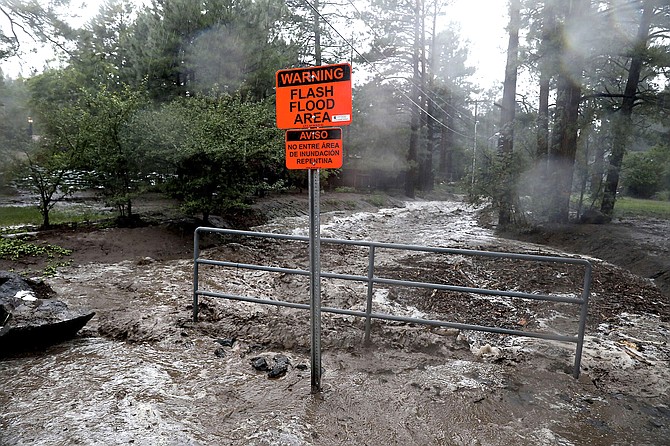 Workers and residents in Flagstaff were assessing damage, clearing away debris and cleaning up Aug. 18 from a flood caused by historic levels of rain that fell on a burn scar from a large wildfire two years ago. (Jake Bacon/Arizona Daily Sun via AP)

Hourly precipitation of more than 3 inches Aug. 17 along the southern part of the scar was described by a flood control district as a "200 to 500 year rainfall event." Lesser, but still significant levels of rain were recorded in other areas of the water-repellent scar.

The fast-moving water poured into neighborhoods and rushed past houses protected by sandbags.

The United Way is organizing a volunteer event on Saturday to help clear flood debris house-by-house, and fill sandbags to "prepare for the next rain," said District Supervisor Patrice Horstman in a Zoom meeting that was rescheduled into the evening due to rain forecasted Aug. 18.

In the meeting, city leaders discussed unfunded and yet-to-be designed plans for flood protection infrastructure and said they are seeking federal funding.

"Unfortunately, it takes a natural disaster for people to listen to the potential for a national disaster," said mayor Paul Deasy.

Heavy rainfall has been pretty regular in the area since mid-July, when Flagstaff residents saw the first flooding after the start of Arizona's annual monsoon season.