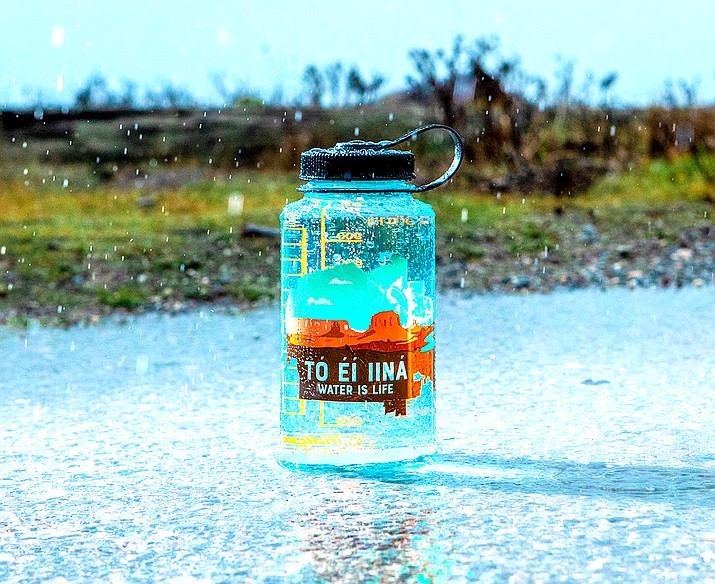 In support of the Navajo Nation, Nalgene has launched a new reusable water bottle featuring the art of designer Jaden Redhair. (Photo courtesy of Nalgene Outdoors)

FLAGSTAFF, Ariz. — Six months after pledging to help the Navajo Nation battle its water crisis, well-known company Nalgene says its Tó éí iiná bottle is one of the company’s most popular products.

Sales from the bottle set a record for “day-of-launch” sales, the company said. The bottle retails for $15 on the company’s website. $5 from every bottle sold benefits water accessibility projects on the Navajo Nation.

The sales from the first six months of the bottle has generated $14,500, which the company recently donated to Dig Deep, a nonprofit organization that serves Americans without sinks, bathtubs or toilets.

Ultimately, the money will go to the Navajo Nation Water Project. In August, Nalgene donated $30,000 in funds and supplies to the tribal nation.

The 32-ounce bottle features Monument Valley and includes brown, red and blue color accents. It was created by Diné designer Jaden Redhair, 21, who is from Window Rock, Arizona. He studies electrical engineering at Stanford University.

“I’m really excited to see where the money goes, and to see how much impact and how much they are able to do with the money to further water accessibility on the Navajo Nation,” Redhair told Indian Country Today.

Redhair said one of his favorite parts of designing the “Water is Life'' bottle has been when customers reach out to him on social media. He believes that visibility brings more attention to the water crisis on Navajo.

“The design symbolizes the sacred role water plays in the Diné people’s lives,” Redhair said. “I hope it draws attention to my people’s plight. Right now, one in three Navajo Nation households struggle daily because they do not have access to running water.”

In August 2019, the company created the Nalgene Water Fund to raise funds and awareness about communities in the United States struggling to access clean water. In addition to helping the Navajo Nation, the company also assists residents in Flint, Michigan.

The company says the bottle helps fund water truck deliveries, the licensing of Navajo drives and maintenance of area roads in rural areas.