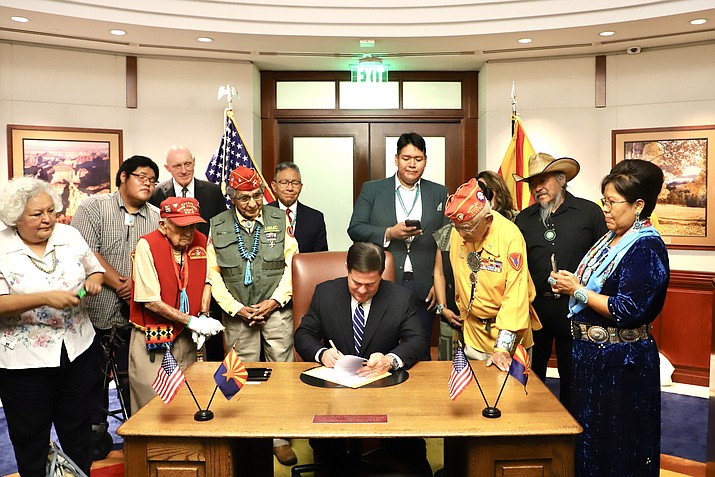 “We pay tribute to the Navajo Code Talkers for their courageous service in World War II. At the time of their enlistments, they were very young men, but they answered the call of duty and unknowingly built a humble legacy for the Navajo people recognized throughout the world. By using Diné Bizaad, our Navajo language, they helped win the war and protect our freedom today. Their service and leadership will forever live on in our hearts and memories. 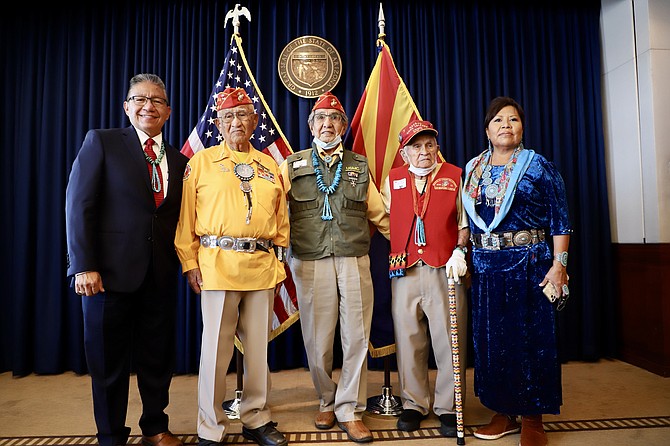 During World War II, the Navajo Code Talkers answered the call to defend the United States of America using the impenetrable code based on the Navajo language that is widely acknowledged as a deciding factor in the war effort.

Arizona SB 1802 was sponsored by Sen. Peshlakai, a member of the Navajo Nation, and received unanimous support from the Arizona Senate and House of Representatives.

“Today, we are blessed to have four Navajo Code Talkers remaining with us, including Samuel F. Sandoval, Thomas H. Begay, John Kinsel Sr., and former Chairman of the Navajo Nation Peter MacDonald, Sr. We honor them and thank their families for all of their sacrifices. They will forever be our legacy and strength,” Peshlakai said.

“The Navajo Code Talkers define and exemplify the resiliency of our Nation and our people. On behalf of the Office of the President and Vice President, we thank Governor Ducey and Senator Peshlakai for declaring a state holiday for our Navajo warriors,” Lizer said.