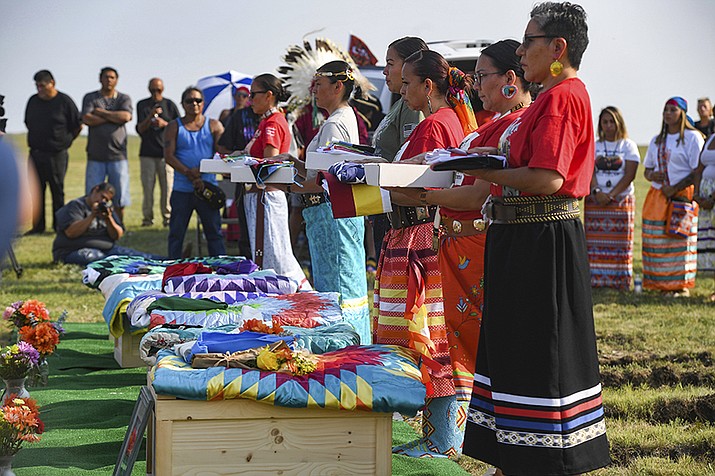 Members of the tribal color guard hold an American flag, a prayer flag and the Rosebud Sioux tribal flag for relatives of the Rosebud Sioux children, who were returned home 142 years after their deaths, at the Rosebud Sioux Tribe Veterans Cemetery in White River, S.D. The American Bar Association’s policymaking body voted Aug. 9, in favor of a resolution supporting the U.S. Interior Department as it works to uncover the troubled legacy of federal boarding schools that sought to assimilate Indigenous youth into white society. (Erin Bormett/The Argus Leader via AP, File)

ALBUQUERQUE, N.M. (AP) — The American Bar Association's policymaking body has voted in favor of a resolution supporting the U.S. Interior Department as it works to uncover the troubled legacy of federal boarding schools that sought to assimilate Indigenous youth into white society.

The resolution, adopted Aug. 9 by delegates at the bar association's annual meeting, calls for the Biden administration and Congress to fully fund the initiative and provide subpoena power to the Interior Department as it gathers and reviews reams of records related to the schools.

The measure also supports legislation that would create a federal commission to investigate and document all aspects of the boarding school system in the U.S., including issuing reports regarding the root causes of human rights abuses at the schools and to make recommendations to prevent future atrocities.

"Putting a light on what is occurring here is so critical because we know that if we do not learn from this history, we are doomed to repeat it," Mark Schickman, a San Francisco-based attorney who serves as a special adviser with the bar association, said as he introduced the resolution. 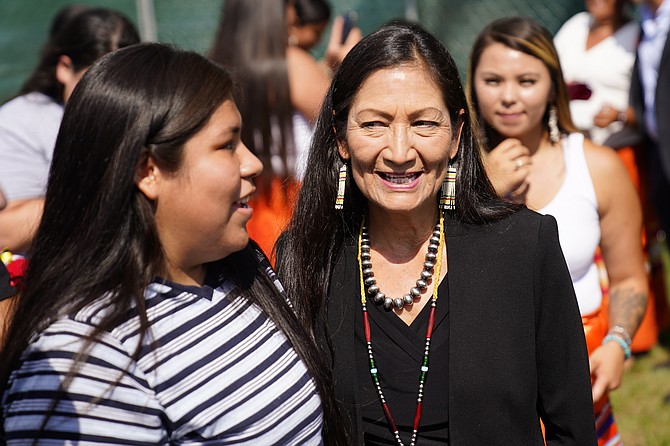 Interior Secretary Deb Haaland meets with young people from the Rosebud Sioux Tribe after a ceremony of the disinterred remains of nine Native American children who died more than a century ago while attending a government-run school in Pennsylvania. (AP Photo/Matt Rourke, File)

Interior Secretary Deb Haaland, a member of Laguna Pueblo in New Mexico and the first Native American to lead a Cabinet agency, announced the boarding school initiative following news that hundreds of bodies were being discovered on the grounds of former residential schools for Indigenous children in Canada.

Experts say the initiative will be difficult because records are scattered across jurisdictions — from the bowels of university archives to government offices, churches, museums and personal collections.

"The department is compiling decades of files and records to begin a proper review that will allow us to organize documents, identify available and missing information, and ensure that our records system is standardized," said Melissa Schwartz, a spokeswoman for the Interior Department.

The agency also is building a framework for how it will partner with outside organizations to guide the next steps of the review. 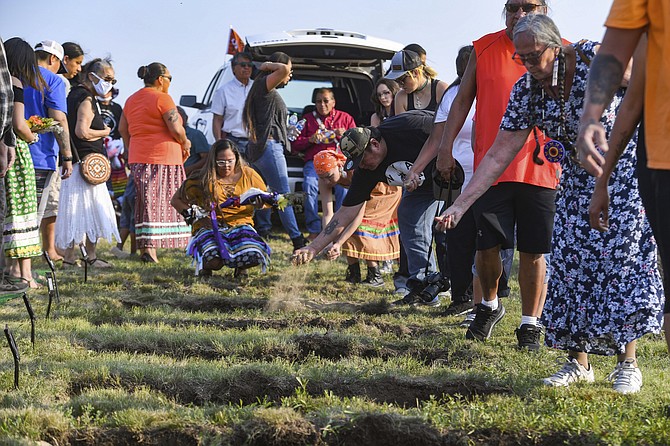 Relatives and tribal members throw dirt into the graves of the Rosebud Sioux children, at a funeral 142 years after their deaths, at the Rosebud Sioux Tribe Veterans Cemetery in White River, Soiut Dakota. (Erin Bormett/The Argus Leader via AP, File)

Consultations with tribes are expected to begin in late fall. Schwartz said those discussions will be focused on ways to protect and share sensitive information and how to protect gravesites and sacred burial traditions.

In the United States, the Indian Civilization Act of 1819 and other laws and policies were enacted to establish and support Native American boarding schools nationwide. For over 150 years, Indigenous children were taken from their communities and forced into boarding schools that focused on assimilation.

The discoveries in Canada and the renewed spotlight in the U.S. have stirred strong emotions among tribal communities, including grief, anger, reflection and a deep desire for healing.

Patricia Lee Refo, president of the American Bar Association, said the resolution adopted Monday was born from her visit to the Navajo Nation in July. She met with tribal President Jonathan Nez, the speaker of the tribal council and the all-female Navajo Nation Supreme Court.

Nez has said the troubling history of Indigenous boarding schools deserves more attention to educate people about the atrocities experienced by Native Americans and the intergenerational effects of the boarding school experience.

The Native American Bar Association last year adopted a resolution calling on Congress to introduce legislation focused on reparations for the treatment of American Indians and Alaska Natives.

The resolution adopted Monday by the American Bar Association includes language in support of legislation that would establish the first formal commission in U.S. history to investigate, document and acknowledge past injustices of the federal government's cultural genocide and assimilation practices through its boarding school policy.

Brad Regehr, a member of the Peter Ballantyne Cree Nation in Saskatchewan and the first Indigenous person to serve as president of the Canadian Bar Association, spoke Monday at the American Bar Association meeting. Choking up, he said he and his grandfather were survivors of Canada's residential school program.

Between the 1880s and 1990s, he said 150,000 Indigenous children in his country were forcibly removed from their families and placed in schools far from home. As many as 25,000 children, including toddlers, never returned, he said.

Regehr talked about the calls to action crafted following nearly a decade of work by Canada's truth and reconciliation commission and the ongoing discoveries of children's remains.

"That has hit me hard, and it hits and it continues to hit many Indigenous people hard," he said, "but it's also hit many Canadians hard for the first time ever."