Federal agreement could bring water system to Navajo and Hopi 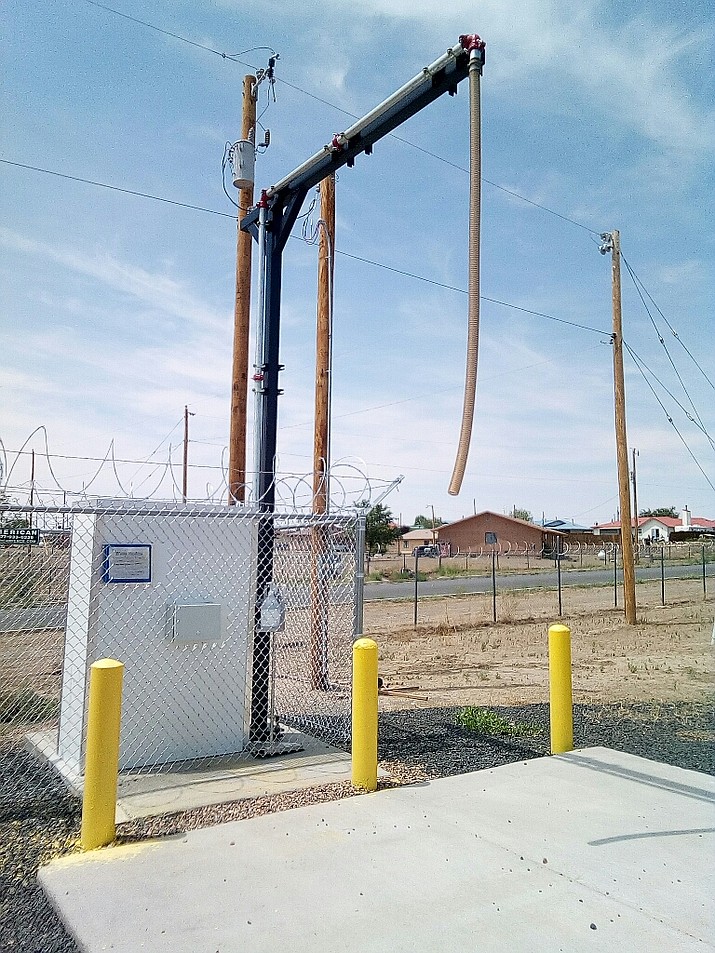 A federal agreement could mean an estimated $1 billion water system for western parts of the Navajo Nation and for the Hopi Reservation. Left: a site in Whitecone. (Photo/NTUA)

FLAGSTAFF, Ariz. — Water settlements with the federal government in New Mexico and Utah are bringing more drinking water to the Navajo Reservation in those states, but a similar settlement in Arizona has not been reached yet.

Rex Kontz, deputy general manager with Navajo Tribal Utility Authority (NTUA), said an agreement with the federal government in Arizona could mean an estimated $1 billion water system that would bring water from Lake Powell to Cameron, Tuba City, western Navajo and Moenkopi on the Hopi Reservation.

This would not be an overwhelming task, either financially or physically, if it was done in chunks over time, he said. Funding could come from the federal infrastructure bill, the federal clean water drinking water bill and other sources.

Kontz said these different bills do not fund specific water programs, but gives NTUA another avenue for funding — it has to apply for each program. Kontz said the Clean Water Act calls for bringing clean drinking water into homes.

“We need to regionalize water throughout Navajo,” he said.

Kontz said one strategy NTUA emphasizes is reservoirs rather than pipelines because they need something that holds water.

Kontz said the water settlement in New Mexico has two major transmission mains with one completed and one underway. He said the San Juan system needs a treatment plant that will feed the system and the other transmission main, known as the Cutter system, has been completed.

“They are tied together by one big pipeline and they bring a lot of capacity to that region,” he said. “Almost everybody (in that area) has piped water in their house. It regionalizes the system and makes it possible for more connections to occur.”

A settlement in Utah will also bring a lot more water to Navajos there, he said.

According to Kontz, there are two components to water use.

First, it needs to come from groundwater or rivers.

Second, it has to be stored often in water tanks. He said the best way to store water is in reservoirs where you lose less of it than in a system where the water is continually flowing. He said water from the LaPlata River going from Colorado into Farmington, New Mexico is now stored at Lake Nighthorse and then released to the Navajo Nation through the city of Farmington.

“We’ve planting the idea of reservoirs with legislators,” Kontz said. “We’re advising negotiators (for water rights) to include some type of storage. You don’t have to have one big lake. You can have several small reservoirs. You have to make sure that everybody in the chain is targeted and that there is planning at the local level.”

Kontz said the lack of water on the western Navajo Reservation in Arizona is evident as drought has caused many of the farms to disappear and many of the ranchers have reduced their herds.

Kontz said he knows it’s a challenge as the land is extremely barren and getting worse each year. He said this area is in its 14th year of drought.

“There has been a lack of moisture for more than a decade. Everybody is waiting for one big solution,” he said.

Kontz said the best bet is to push hard to get the litigation done for the federal settlement in Arizona.

He said the recent monsoons helped because rainfall puts water on the ground. However, he said water that needs to be stored, whether coming through pipes or reservoirs, depends on snowpack.

As for contaminated water, Kontz said water coming into homes on the Navajo Reservation is not contaminated.

“People need to quit using it,” he said.

Kontz said one of the problems is that people became accostmed to using water from wells and they often have to drive 30 miles or more to get to treated water. So, the water from the wells is more convenient.

Kontz warns that drinking water with uranium does not cause immediate stomach or noticeable problems, but people end up with cancer later.

Kontz said 59 chapter houses on Navajo have free water available for its residents, but few people are coming to get it

“It’s underutilized and we cannot figure out why,” he said.

“They are doing the leg work that should have been done a long time ago,” he said.

Another avenue of funding could come from Indian Health Service construction branch. He said IHS is mandated to bring sanitary services into the homes of Native Americans, and this includes clean drinking water.

“This has been funded at a small helpful level that has not been adequate,” he said. “There has been a push to get more money for this program. It’s long overdue. It should have been done years ago.”

Kontz said the IHS sanitary services program started in the 1960s and was supposed to take about 10 years, but is still ongoing because it has never been adequately funded.

“Some senators are pushing to fully fund it,” he said. “There is more pressure to do a better job to fund these programs like it should have been done in the beginning.”

Kontz said if Navajos cannot tap into traditional pipelines, they could get a cistern, however, they would still need to haul water.

“We hope to find a system where people don’t have to haul water. Technology is changing and we hope to have that system someday,” he said.