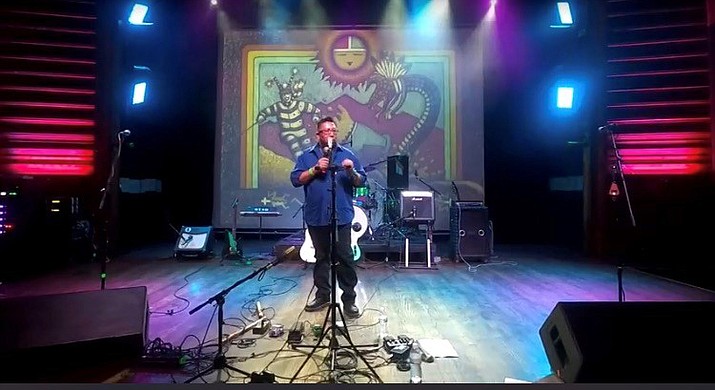 FLAGSTAFF, Ariz. — Hopi Tribal Chairman Timothy L. Nuvangyaoma said at Rumble on the Mountain 7 that it has been a tough time for Native American tribes centered around Flagstaff for the past few years.

“We’ve been dealing with a severe, extreme drought situation,” he said. “And to know Hopi, to know who we are, it’s not something we use as an excuse, to give up on who we are as Hopi people. Our culture. The way we do things. Our dry farming. Our prayers for rain. That hasn’t stopped.”

He said it is hard to articulate what the rain means, or sacred spaces like the peaks in Flagstaff mean to the Hopi.

“There’s no way to capture that,” he said. “Some of you understand exactly what that means to us. Whenever I come to Flagstaff, I automatically feel that strong, spiritual connection, not only to the Peaks, but to the lands around here. Hopi has had footprints throughout this world. We are connected to it. Our relationship to the world is an intimate relationship.”

When Nuvangyaoma said he thinks about where the Hopi are today, it brings up a lot of emotions: sadness, anger and frustration.

“Why are we doing this to each other? Why are we fighting one another over precious resources that is a simple, humanitarian place that we need to be to understand these resources that we have are a blessing to us. How do we get around that?” he asked.

Nuvangyaoma said Hopi has been in the courts batttling the Arizona Snowbowl since the beginning.

We knew it was going to be a battle. We knew it would be expensive,” he said. “But there’s a principal behind it. The other tribes understand that. But how do we get that across to the [policians] that get involved here?”

Nuvangyaoma spoke about a council meeting that was held in Hopi Tribal Chambers with former Mayor Coral Evans and other council delegates.

“They came in with a proclamation for a peace pole (which stands in Heritage Square, which is owned by the Hopi Tribe) that has an insciption promoting peace. But Nuvangyaomo said what the insciption doesn’t have is anything about actions.

“We don’t see those actions,” he said. “When I’m reminded about that peace pole and what we’ve encoutered, and the lack of support, that’s where those emotions come in again.”

Nuvangyaoma said he’s been told of an Indigenous group that the council created to try and bridge some of the gaps and has had the priviledge of sitting in with some of the city council early on in his chairmanship.

“The meetings were, I was thinking, favorable. I was optimistic,” he said. “But, maybe like some of my precedessors, our voice seems to fall on deaf ears. We’re at the table and all they see are our lips moving.”

Nuvangyaoma remdinded the crowd that Hopi are stakeholders in the city of Flagstaff and in the fight against Snowbowl.

“We own property here,” he said. “Again, footprints of Hopi are all around here. Yet, we know with any legal battle there comes court costs. Our properties have leins placed against them. We are trying to protect something sacred here.... Further expansion. Further desecration is not what we’re buying in to.”

As for water, the Hopi have been told they should be able to live on what they have on their main reservation.

“How do you expect our future generations to live and grow?” Nuvangyaoma said. “In my opinion, viewing this from my position in 2021, I see this a modern day genocide. Turn the faucet off to the tribe who has humbly lived on these lands first before anybody ever showed up here. Shut the water off to them and let them die off.”

More information about Rumble on the Mountain 7, the chairman and others comments can be found at www.facebook.com/edkabotie.